This might perhaps
have been a fitting subtitle for ENOís current production, given John
Tomlinsonís tour de force of a performance. He appeared in ENOís
last two stagings (at least once alongside the current Marschallin, Janice
Watson) but his Ochs never owned the stage quite like this. The glint in this
gravelly bassís eye is at once repulsive and endearing, and he makes
something of every word of Alfred Kalischís slightly clunky English
translation, a feat equalled only by the excellent Andrew Shore as
Faninal. 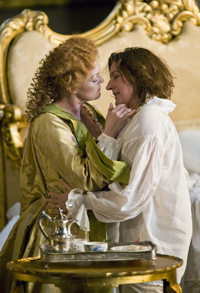 That is not to say that there was much evidence of weakness in the rest of
the cast. Janice Watsonís Marschallin was not the glacial grande
dame we often see, and let her mask slip at times ó for a mere moment
in the confrontation with Ochs in Act 3, her grace and poise yielded to a
flash of unrefined hot-blooded fury. Here we saw a rare glimpse of the fiery
spirit which surely attracted Octavian in the first place. Later, when she
observed him with Sophie, the faÁade slipped in quite another direction.

Sarah Connollyís Octavian was expansive of voice and full of youthful
vigour, loose-limbed and confident in his unofficial temporary role as lord
of the manor in the Feldmarschallís absence. I had been doubtful about
Connollyís ability to play a youth, after the succession of Handelian
warrior-heroes on which her career is founded, but she captured ideally the
petulance and over-sensitivity of the selfish teenager behind this young
aristocratís aristocratic pomp and chivalry.

It is good to hear the accomplished soubrette Sarah Tynan in a proper
lyrical role such as Sophie; she looks lovely, is able to play the right age,
and is a feisty little madam with or without Octavianís assistance. Her
silvery soprano sits ideally with the musical character of the scenes in
which she sings, and is rightly as far the vocal opposite of Ochs as it is
possible to be. 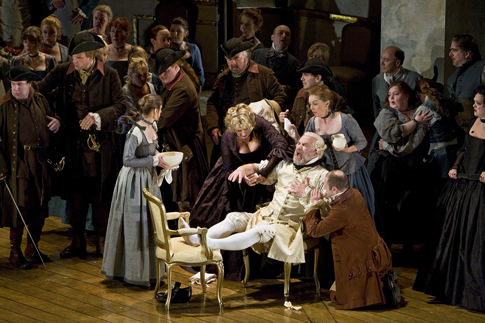 Rosenkavalier was, of course, Straussís answer to Figaro, and
director David McVicarís 2005 staging of Mozartís work for the Royal
Opera clearly took much inspiration from this production which originated at
Scottish Opera in 1999. At times this Rosenkavalier seems full of McVicar
clichÈs, but as it predates most of the work for which heís now renowned,
it should rightly be seen as an original. One such ëclichÈí was the
deconstructed rococo set, a single one used (with contrasting embellishments)
for all three acts. Another, repeated in Figaro, was the attention to detail
in the direction of a multitude of minor roles, servants, and non-singing
characters. Harry Wardís idiotic, mugging Leopold stood out, but from the
Singer (Alfie Boe, replacing an indisposed Dwayne Jones) to the Milliner, all
were clearly defined and full of personality. Stuart Kaleís Valzacchi was
partnered by an exceptional Annina in Madeleine Shaw, currently on ENOís
Young Singers programme. 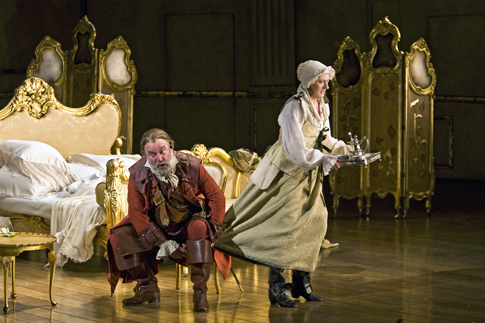 Sometimes, the concentration on detail is to the detriment of the bigger
moments. The Marschallinís exit after the trio is unsympathetically staged,
with Janice Watson forced to edge her way clumsily through a side doorway
that is too small for her immense dress, and lacks impact. Ed Gardnerís
conducting, though sumptuous when required, is fairly conservative and
supports rather than adds to the intricate character of the performance. But
McVicarís ability to make this lengthy and variably-paced opera flow so
well ó even with standard musical cuts opened out ó is a credit to his
dramatic intelligence.