The Cosi fan Tutte is the well-regarded 1954 set, in dry, flat mono. In its 72 minutes, the highlights favor act one and the first two scenes of act two. Most of the opera’s most beloved music does come in these sections, but any sense of the dramatic resolution gets lost in the quick jump to the supposedly joyous final ensemble.

Is it just the faded quality of the mono sound that makes it difficult for your reviewer to find the sparkle and charm that the performance promises? Elisabeth Schwarzkopf sings with style and accuracy, but little warmth. Nan Merriman’s Dorabella makes the most of her act one solo, “Smanie implacabili,” infusing her reading with an edge of anger reminiscent of Donna Elvira. After that, she slips into the ensembles and loses any profile. Rolando Panerai and Leopold Simoneau, as the two lover/soldiers, sound appropriately fresh. Not much of Sesto Bruscantini’s Don Alfonso can be heard, which may explain the lack of dramatic impetus. Ultimately, Karajan seems to have gotten the note-perfect performance he wanted, but the lack of edge tends to make the numbers run together. 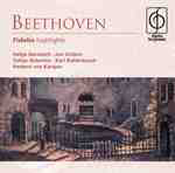 The 1971 Fidelio finds Karajan urging on the drama. The strings cut through impatiently, horns ring out with emphatic despair. But every moment seems to come in its own little interpretive capsule, unconnected to the next. Jon Vickers, who had already offered a remarkable Florestan on the famed Klemperer set, may be acting when he lets his voice sound worn at times, or it may be the singer coping with Karajan’s sometimes languid tempo. Helga Dernesch faces a similar challenge in the rhythmically fragmented “Abscheulicher!” solo. She relies more on lungpower than interpretation, but that also has its merits. The rest of the cast makes little impression, although Karl Ridderbusch makes Rocco less annoying than the character can be.

At an hour of music without dialogue, a Fidelio highlights set may be the way to go for some listeners, as it contains much of the opera’s best music. Both this Fidelio and the Cosi certainly deserve acknowledgement as offering expert performances in many regards, but with strong competition from other sets for both operas, these two highlights CDs can best be recommended to die-hard fans of HvK.