Cinematography, hair, costumes: all are redolent of a proud stage tradition adapted – not always with subtlety – to the needs of the camera, circa 1970. In 2008, what might have seemed hopelessly dated, even musty, actually carries a sort of “toy world” appeal.

The chief drawback of most filmed opera, especially from this era, is that the intimacy and varied perspective of the camera cannot mitigate the artificiality of the sound, which not only relies on lip syncing but also maintains a consistently flat audio stage, belying the naturalistic movements of the both camera and actors. To the credit of both the Lortzing and Mozart sets, excellent conductors lead energetic performances from the Hamburg Philharmonic State Orchestra. Charles Mackerras deals with Lortzing’s perky – perhaps excessively perky – score to the comic Zar und Zimmerman with flair and good spirits. An entire opera based on a series of mistaken identities (Peter the Great has gone “undercover” to learn more about the world), Zar und Zimmerman has never really established itself outside of its home country. This video doesn’t exactly make one regret that fact, but it does offer an extremely attractive cast doing their best to make the time pass pleasantly. Lucia Popp’s absolutely sweet Marie stands out, with Raymond Wolansky as Peter the Great right behind her. In the tenor role of Peter Ivanov, Peter Haage’s chubby male ingenue may annoy some as much as he did your reviewer. 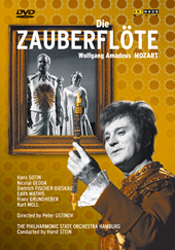 Hans Sotin has the comic villain role in the Lortzing, and he reappears in Die Zauberflˆte as Sarastro. Veteran Horst Stein leads an old-fashioned performance, appropriately enough for this production, directed with a disappointingly scant amount of invention by Sir Peter Ustinov. The illustrious cast included Dietrich Fischer-Dieskau as the Speaker, Nicolai Gedda as Tamino, Edith Mathis as Pamina, Cristina Deutekom as the Queen of the night, and William Workman as Papageno. Their vocal contributions are all solid, but Ustinov fails to inspire them to offer more than perfunctory acting. Deutekom sings a fearsome Queen while her face remains entirely impassive. No one lip syncs all that well, but Workman in particular barely seems to be trying. The three boys compete to find pitch, with no winner. Monostatos appears in blackface. All in all, despite the camera, the opera remains stagebound and rarely shows sign of life.

The Lortzing DVD preserves a charming performance of an opera little known in the US, so it is worth a look. Fine DVDs of Die Zauberflˆte, however, can easily be acquired, so anyone thinking of this set should either be a fan of the cast or a devotee of mediocre TV direction.