Supernumeraries infiltrated the
chorus, and sets and costumes went beyond the most extravagant excesses of
Hollywood. Eat your heart out, Cecil B. DeMille! Opera ó growing in
popularity by the season ó became the opium of the masses, and directors
vied with each other in productions that took the breath away. Forget the
plot and the music written for it; the show was the thing!

Texasí 62-year-old Fort Worth Opera ó itís a senior among American
companies ó is out to restore a proper balance, and the four productions
currently on stage there in the FWOís second summer festival stress that
this is no longer just another regional company, but an enterprise that has
defined for itself a special identity through its commitment to fidelity, to
composersí intentions, to perceptive direction and a finely honed sense of
what it is that makes opera both grand and great. The Turandot that
opened the festival on May 24 made all this clear. For those who wanted awe,
it was there in the staging designed by Peter Graves and Allen Charles Klein
for Opera Cleveland. However, it was Daniel Pelzigís sensitive direction
that made this refreshingly fascinating Puccini. 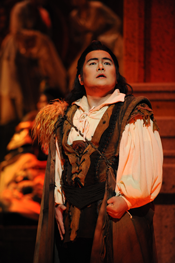 Dongwon Shin as Calaf
Turandot is a troubling tale. The eponymous heroine isnít the
girl next door; sheís downright nasty, a trait of character underscored by
the ease with which she condones the murder of sweet and innocent Li˙, the
one genuinely good character in the story. In most productions Turandot is a
simplified study in frigidity ó an ice sculpture imperially above the
masses on stage with half of Beijingís Imperial City on her head and
shoulders. Pelzig made her mobile and an agitated presence in her own story.
The prehistory of abuse to a female ancestor became a document of modern
feminism as she stood next to Liuí in the younger womanís hour of
sacrifice. And Carter Scott, who stepped in for an ailing Elizabeth Bennett,
has the power, passion and agility of voice to make Turandot a portrait of
deeply internalized suffering. (The goodness of Li˙, sung with youthful
devotion by Sandra Lopez, even lost some of its appeal through this
meaningful feminization of the Princess.)

Given the paucity of tremendous tenors today it is astonishing that one
has to go to Fort Worth to discover Korean-born Dongwon Shin, whose throbbing
ìNessun dormaî would leave the citizens of any city willing to surrender
a night of sleep to hear the greatest hit in the opera sung with his ardor.
Stephen Dubberly had the massive FWO Chorus making music ó not merely
noise, and FWO music director Joseph Illick extracted playing from the Fort
Worth Symphony that added to the impact of a Turandot that one had
hoped one day to hear.

Anthony Dean Griffey, a major success of the season at the Met as
Brittenís Peter Grimes, has made Lennie, the retarded central
figure of Carlisle Floydís Of Mice and Men a signature role, and
itís wonderful that audiences can expect the young American tenor to sing
this role for decades to come. 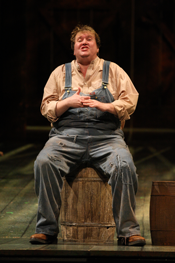 Anthony Dean Griffey as Lennie
Even Griffeyís considerable bulk contributes
to his success as Lennie, for he seems at first blush just another overweight
kid. But watch his fingers as he seeks solace in ìsomething soft.î Keep
an eye on his smile and the little skip that he executes from time to time
and youíll swear that you have a genuine case of arrested mental
development in front of you. Griffey makes Lennie loveable and he makes his
relationship with his companion George ó both migrant workers from the
Great Depression ó meaningful and beautiful.

George could hardly be better sung than he was by Canadian baritone George
Addis, another of astonishing FWO artists to watch for elsewhere. Brandi
Icard, true, was one dimensional as Curleyís love-starved wife, while Matt
Morgan made Curley the quintessential American macho male, recalling Annie
Proulxí pronouncement that ìmen are the major victims of American
masculinity.î 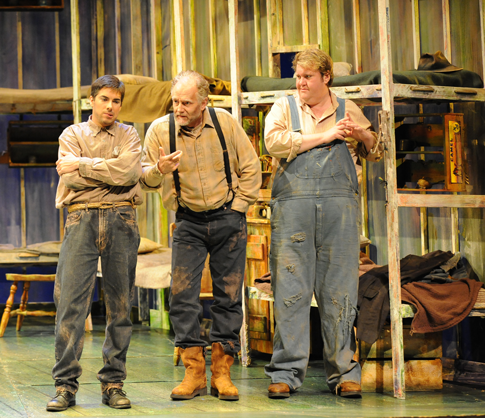 The Utah Opera production ó sets and costumes by, respectively, Vicki
Davis and Susan Memmott-Allred ó recalled Grant Wood, and Richard Kageyís
direction upheld the view that this 1971 score is Floydís finest work.
Illick was again an impressive conductor, especially in the orchestral
interludes that put Floyd on a level with the Anton Webern of Wozzeck. 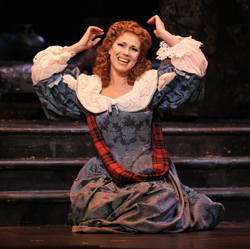 Elizabeth Futral as Lucia
Despite itís greatest ìhitsî ó the sextet and the Mad Scene ó
the bel canto melodrama of Donizettiís Lucia di Lammemoor is not
everyoneís tankard of ale. A less-than-great performance is uncomfortably
close to parody, and its glaring rejection of traditional family values is
wasted on those interested only in coloratura acrobatics. How different,
however, the FWO Lucia directed by David Gately and conducted by
Steven White!

Lucia has rarely had a better interpreter than Elizabeth Futral, cast by
the FWO in the title role. She is one of the loveliest singers of her
generation, and she makes bel canto seem her mother tongue. She is
wonderfully vulnerable ó even when one wishes she would take a knife to
Brother Enrico. Futral sang the Mad Scene with delicate sensitivity, never
reveling that thatís only catsup and not blood on her hands and gown, Yet
this show was almost stolen from her by youthful and up-coming tenor Stephen
Costello as losing lover Edgardo, a role he has already sung at the Met. In
his cemetery lament in the final scene of the opera Costello, lean and
handsome at a mere 28, sang his way into this music with a richness of tone,
accuracy and articulation that had the audience on its feet, suggesting that
the next great tenor is now ó and in Fort Worth. 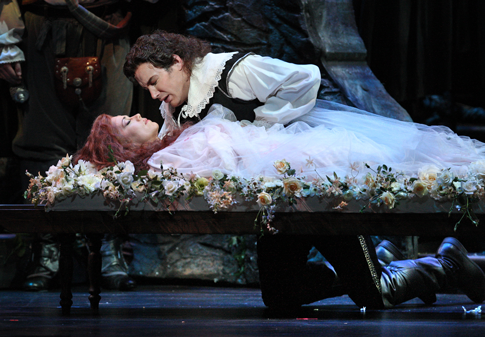 Elizabeth Futral as Lucia and Stephen Costello as Edgardo

The Cincinnati Opera production is traditional and true to the period and
it gained color through lavish costumes from near-by Dallas. The chorus
seemed to have had one ó or two ó too many in the orgiastic post-wedding
revelry. 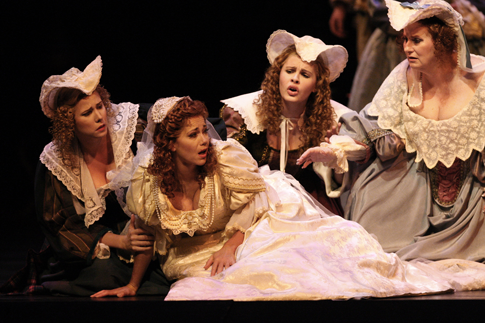 Homosexuality might have come a long way since the day that it was ó
said Oscar Wilde ó ìthe love that dare not speak its nameî to ó as
someone quipped in the 70s ó the love that wonít shut up. Nonetheless,
the composition of an AIDS opera is a task far removed from dashing off
another BohËme or Butterfly. 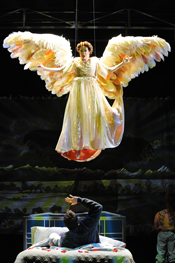 Priorís (David Adam Moore) prophetic visions culminate in the appearance of an imposing and beautiful Angel (Ava Pine) who crashes through the roof of his apartment and proclaims, ìThe Great Work begins.î
That alone, however, makes
Peter Eˆtvˆsí opera based on Tony Kushnerís Angels in America
all the more remarkable ó and admirable, and the choice of the work to
round out the FWOís second festival season is to be praised as an act of
bravery and bravura. This obviously begs the question about the quality of
the opera, which received its first full staging during the festival in Fort
Worthís 500-seat Scott Theater in the cityís museum district. (The other
three operas were staged in the cityís still new downtown Bass Performance
Hall.) In shaving Angels down from a seven-hour stage work to an
opera of a mere two hours Mari Mezei has made a noble attempt to transfer the
drama ó and its discomforting subject matter ó to another medium. 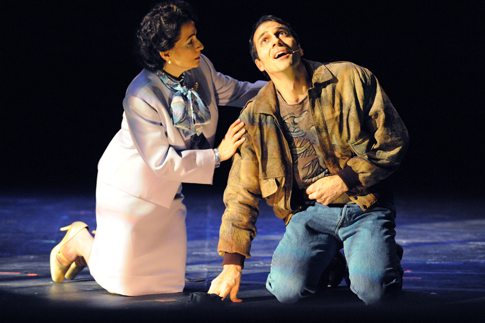 Hungarian-born Eˆtvˆs, a major European modernist in the wake of the
Second Viennese School, has written much music for the opera that is of
ethereal beauty and impressive in technique. (Much of it is delivered by
musicians screened on either side of the stage.) Yet the result seems a work
in which less is much less; too much has been lost in transition. An immense
amount of detail obscures the major issues of Kushnerís play. 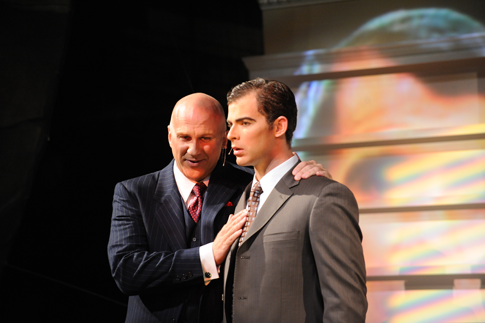 Kelly Anderson was a brilliantly butch Roy Cohn (but who remembers today
who that was?), and studio artist Ave Pine was vocally stunning as the major
angel who flew about on wires while singing famously. In all probability
Angels will not be done again in this country in a long, long time,
and one is grateful to FWO general director Darren K. Woods for his courage
in bringing it to the festival.

A bonus of the í08 season was the inclusion in the season of Ricky Ian
Gordonís Orpheus and Euridice, his song cycle for soprano,
clarinet and piano. The performance by Gina Browning, virtuoso clarinetist
Jonathan Jones and Illick at the piano was part of More Life: The Art
& Science of AIDS, a series of concurrent events involving a
multitude of Fort Worth community organizations designed to focus attention
on the AIDS epidemic.

On stage in Fort Worth in 2009 are Carmen, Cinderella and Dead Man
Walking. The season from 25 April through June 10 is followed immediately by
the 2009 Van Cliburn International Piano Festival. Visit www.fwopera.org.