Nearly everything about the writing seems over the top. Its incredible
length. Its massive orchestral forces. Its sanctimonious religious
posturings. All seems calculated not just to merely impress or to move, but
to wallop you over the head with some quasi-spiritual revelation.

In assessing the stage worthiness of lyric theatre pieces, Joseph Kernan
wrote ìthe best operas are dramatic, the failures are no proof at all.î
Letís just say that ìSaint FranÁoisî is to my taste, well, not
dramatic. Most everything about it resembled a cleverly staged oratorio. To
that end, the gigantic orchestra was placed on stage (it probably wouldnít
fit in the pit!). Scaffolding and ramps and a huge balcony are built around
the band, intentionally including it in the stage picture.

That leaves the simple story to play out on the huge apron in front of it
which covered the unused pit. And the dramatic content of that story goes
something like this: Saint counsels fearful monks. Saint heals leper. Saint
talks to birds. Saint receives stigmata. And dies.

Oh, yeah, and a busybody angel visits and spooks the bejesus out of the
scaredy-cat monks. I joke ó slightly ó but this thin plot is stretched
out of all proportion into well over five hours. What almost energizes and
sustains the story-telling is the masterful stagecraft of designer Jean
Kalman and director Pierre Audi, for they have devised some beautifully
evocative effects.

Act One finds a pile of simple (mostly black) wooden crosses center stage,
a lone bench, and a ìrevealî of a pulpit on an elevated platform. As
other crosses are added to the pile, the imagery suggested so many
possibilities. Do they represent of martyrsí bodies? A pyre created by
religious fanaticism? Holocaust victims? It raised expectations (unfulfilled,
alas) that the piece might have something to say beyond presenting a public
face of the composerís private, deeply felt Catholicism.

Although that imagery was never fully developed, Act Twoís stylized
rolling trees made of bare planks always reminded us that the cross of Christ
was in fact made from a tree, and the slightly raked black platform center
stage allowed for some beautiful artistic groupings which were put into fine
dramatic relief against the ground cloth. In Act Three, the crosses were
piled up in a semi-circle at the base of a lone rude tree, like so much
concertina wire forming a base of thorns. The simple small wooden platform in
front of this was a perfect focus for ìFranÁoisíî last moments. 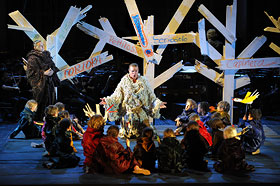 The well-crafted straight forward confrontation between ìSaint
FranÁoisî and the ìLeperî fairly crackled. A wonderfully tender
relationship was developed between ìFranÁoisî and the fearful
ìLÈon,î which seethed with subtext. ìThe Angelísî every scene had
a haunting visual beauty and meaningful interaction, with excellent use of
levels for psychological impact.

That said, even Mr. Audi and his design team could not salvage the
interminable final scene of Act Two with the children and the birds. Long
after we got the point, and got it again, like the Energizer Bunny it went on
and on and on. Oh, they made a good stab at maintaining our interest with
some playful writing of the birdsí names on the bare trees with Magic
Marker, and the genial waving about of colorful paper birds. But long after
the Marker was dry and arms were dead tired of bird-play, it kept churning,
not in a mesmerizing Phillip Glass sort of way, just. ..churning in fits and
starts.

Critically, it seemed that ìFranÁoisíî death went for too little.
Perhaps we waited too long for it? Or perhaps a better visual solution could
have been found other than having the dead man file off between the
choristers. Although the lighting was excellent throughout, the script says
the final lighting effect should glow blindingly brighter where
ìFranÁoisî had lain. Instead, a truncated bank of orange lights glared
from behind the upstage scrim like back lighting left over from the Vegas
scene of ìDreamgirls.î

Happily, Netherlands Operaís reliably high quality visuals were matched
by a truly wonderful cast. Camilla Tillingís engaging ìAngelî walked
off with the show and it is easy to see why. She is possessed of a clear,
lovely soprano with plenty of point in all registers. She sings the role with
great understanding, masterful phrasing, and complete control of the musical
challenges. And, she quite simply has the most beautiful and accessible music
in the piece, which she serves very well.

Hubert Delamboye has only once scene as ìThe Leperî but he wrung every
ounce out of it with fiery, securely voiced declamation. The effect of his
being cured was magically created by his simply peeling off one of his garish
gold and black sleeves to reveal his pure flesh unadorned. Both baritone Henk
Neven (ìFrÈre LÈonî) and tenor Tom Randle (ìFrÈre MassÈeî) turned
in performances that could not be bettered. In a piece of luxury casting,
heroic leading tenor Donald Kaasch sang a fine ìFrÈre Elie.î Armand
Arapian, Jan Willem Baljet, and Andre Morsch contributed solid singing in
their smaller parts. The excellent chorus was tremendous in their powerful,
meticulously schooled phrasing. 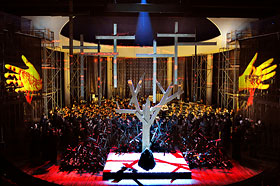 That leaves our ìSaint FranÁois.î Although he was not announced as
indisposed, popular baritone Rod Gilfry seemed at times like he might have
been a little tired in this first performance after the premiere. He is a
fine singer (as well as actor) and he certainly commands a secure technique.
But this role is a huge step forward from his core repertoire of
ìDulcamaraî and ìMarcelloî and ìPapageno.î The rangey writing for
a dramatic baritone (or high bass) who seldom leaves the stage, calls on
every trick in the singerís bag. I commend Mr. Gilfry for the considerable
success he has had with this assumption, and the fact that he has learned
this demanding part speaks well for him as a serious artist.

Indeed, he always displayed utter commitment and total concentration, and
lavished us with beautiful outpouring of sound. But it did push him to the
limit. For all his success with it, I wonder if he might not retire the role
from his repertoire for a few years until age provides a bit more heft and
stamina? With his chiseled good looks and designer white robe, he did not
look the ascetic monk so much as a very caring fashion model (is there such a
thing?) before a Prada ad shoot. Other than that, I found Angelo Figusí
costumes highly creative and character-specific. The ìAngelísî several
apparitions were beautifully attired, especially her knock-out plastic gown
that looked like a Kandinsky had collided with a shower curtain. No kidding.
Wild and wonderful!

It is hard to over-praise Ingo Metzmacher and his superb Resident
Orchestra for their thrilling reading of this gigantic score. Their
attention, concentration and musicality never flagged over an exceedingly
long evening. For all my reservations about the dramatic viability of the
piece, there is some remarkable writing in it. All of the ìAngelísî
scenes, including her motif are ravishing; the ìLeperî is well
characterized; the choral writing is compelling; and ìFranÁoisíî solo
and duet scenes with ìLÈonî and ìMassÈeî contain many serenely
beautiful musical themes and haunting melodies.

But that jittery wind section repeats about ten times too often, and what
seem to be logical musical climaxes simply frustrate us by morphing into
another repetitive section, or more jittery winds. To me, it seemed that
Messiaen the Catholic sometimes indulgently eclipsed Messiaen the musical
crafts smith.

Is ìSaint FranÁois díAssiseî a viable opera? Kernan be damned,
Netherlands Opera thinks it is. And they are to be congratulated for coming
to grips with it with well-considered solutions, and for treating us to a
thoroughly engaging and uncompromisingly professional production.