Ms. Bartoli
is the raison díetre for Z¸rich Operaís colorfully mounted
rarity, continuing in her celebration of the 200th anniversary of operatic
legend Maria Malibran for whom the piece was written. But for our starís
committed interest, I am not sure it may have seen the light of day, nor
certainly would it have scored such a big success with its public.

In case you have missed it, Ms. Bartoli has made a specialty of late
unearthing little-known pieces and/or creating compilation albums around
themes, or composers, or both. Witness the recent promo campaign attending
the release of ìMaria,î a CD in which she (quite spectacularly) covers
all things Malibran. Happily, Ms. Bartoliís unquenchable musical curiosity
(and perhaps, marketing acumen) are wedded to a passionate artistry,
unfailing musical and dramatic instincts, and a uniquely personal sound
served by a reliably sure-fire technique.

Indeed, in ìClariî it seemed there was nothing our diva could not do.
Complex arpeggiated licks, perfect trills, spot-on wide-ranging interval
leaps, superb diction, secure tone in all gradations of volume, melting
lyrical outpourings, and nuanced coloratura with fiery temperament ó all
were on display in La Bartoliís bravura performance. An added plus is that
the smallish Z¸rich house perfectly showcases her medium-sized voice. Oh,
yeah, and she is simply a beautiful woman with an effortless star
presence.

The company assembled a strong cast to partner one of the worldís most
famous singers. As the ìDuke,î tenor John Osborn displayed a very winning
presence and lovely voice with a solid technique that allowed him to not only
match Ms. Bartoli in their sizzling duets, but also to pin our ears back with
some dandy climactic high notes. Mr. Osborn surely must be numbered among
todayís top leggiero tenors.

Eva Liebau deployed her clean,sparkling soprano to good end as
ìBettinaî especially with a well-sung canzonetta. As the father
ìAlberto,î Carlos Chausson made every booming note count and offered a
well-rounded, humorously self-pitying portrayal. Slightly less effective,
although still eminently enjoyable, were Stefania Kaluzaís mother
ìSimonettaî and Oliver Widmerís ìGermano.î The former sometimes
seemed short of voice at the break, and the latter sometimes disappeared into
the orchestral textures in florid passages.

The well-tutored chorus sounded good, wore their succession of outlandish
costumes well, and did every goofy piece of stage business and choreography
(by Beate Vollack) that was asked of them with dedication and good humor. And
now we arrive at the goods news/bad news part. But first, bear with me. 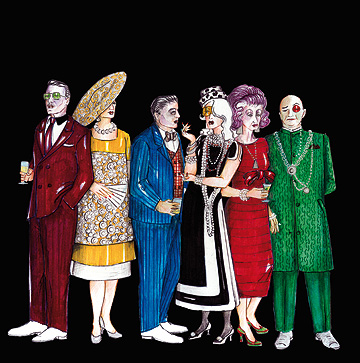 Some years ago, before I really knew Handelís ìGiulio Cesareî at all
well (or really, at all), I saw a dizzy Euro-putzy production of it based on
the comic book ìAsterix and Cleopatra.î Well, you can imagine what it was
like, right? But not knowing any better, it was well sung, so I really sort
of liked it. Never mind that it was entirely the wrong tone for the piece. I
had fun, dammit, laughing in all the wrong places. And that is a bit how I
felt as I was discovering this production of ìClari.î

For it seems that its gentle charms should be more akin to the sincere and
sentimental village milieu of ìSonnambulaî than Act Iís nutty
Once-and-Future-Guggenheim of a drawing room. Brazenly colorful modern
furniture provides a modest island of repose in a riot of modern art, not
least of which is a huge bright red bust of a gorilla. Which our heroine
mounts in an unhinged Fay Wray moment at Act Oneís end. Not to impugn
Christian Fenouillatís witty and beautifully executed designs. Setting Act
II in a very realistic modern hospital waiting room, into which the female
chorus of nurses wheels the suffering ìClariî in a hospital bed, was
brilliant. As was Act IIIís shallow farmhouse kitchen and entry way (with
soiled rubber farm boots lined up). The goof of having a drop with a
valentine cut-out fly in to frame our heroine for her final solo as she pokes
her head through the hole left for the brideís head was a delight.

Too, Agostino Cavalcaís colorful costumes were perfectly calibrated to
support the concept, notably the bumble-bee-black-and-yellow servants
costumes, the outrageous ìbeautiful peopleî look at the birthday party,
and the pseudo-Alpine dress for the peasants. It must be said that Ms.
Bartoli was ravishingly attired. Her first entrance costume was an ice blue
sequined suit, rivaled by her birthday party get-up as she pops out of a cake
in a bugle-beaded pink strapless cocktail dress. Stunning. Even her peasant
dress flattered and did not visually let us forget who was the star.

More Good News: Moshe Leiser and Patrice Caurier co-directed their
principals exceedingly well. There was nice, varied blocking with good
motivation and character interplay. They invented meaningful and clever
business for the very long set pieces to inject variety and (yes) humor. The
ìDukeî as preening peacock (Liberace with a nod to Elvis) was a winning
touch, and his vamping of ìClariî by slipping his robe off his shoulder
(yeah, like that would inflame her) was a hoot.

Another brilliant device was the use of a framed ìpaintingî in the
opening location, which morphed into a succession of projected photos
detailing the prequel to the operaís action, namely ìClariísî leaving
home and being held captive by the ìDuke.î Funny funny images that did,
however distract from the long, well-played intro to the sopranoís opening
aria. The bit of ìClariî hiding herself from her dad in the farm
vestibule by putting a coat over her head to match the other similarly
adorned coat hooks was another master stroke. And I loved ìDukeísî
third act entrance in a roadster.

Bad News Part: I wish the directors had showed more care with their uses
of the chorus. Often they were relegated to performing the most cliched and
timeworn shtick, looking all the more obvious for having it amid so many
other inventive goings-on. I mean, please, servants endlessly ìpolishingî
the same spot on the chair/floor/wall/air/fill-in-the-blank? And doing ersatz
Teutonic folk steps that would have been rejected from ìThe Producersî?
We have seen it all before and these guys are too good to settle for that.

Things in the pit were under Adam Fischerís sure hand. He elicited
secure playing from the resident ìLa Scintillaî period instrument band. I
am not sure that this sound made the best possible case for Halevyís score,
but, save for a few periodic stroppy moments in the horn section, they played
with stylistic commitment. Side note: I have never ever in my life seen/heard
an orchestra tune this much. They easily took five minutes to do just that
after we were all ushered to our seats in a very hot auditorium. Maybe they
could start tuning up before the house manager rings the bell?

ìClariî is not likely to show up in many (if any) other major houses,
but it might be a good fit for smaller opera festivals looking for intriguing
variety. Glimmerglass? St. Louis? The score is certainly pleasing enough, and
true to its times and performance practices, Ms. Bartoli interpolated a
Rossini aria as well as an Halevy aria from a different piece into the
performance. (Hell, we would have listened to Cecilia do ìProud Maryî if
she wanted!)

Quibbles aside, with ìClari,î Z¸rich Opera produced a solid success,
well cast, with excellent production values, and an all-too-infrequent chance
to revel in Cecilia Bartoli at the top of her game. Really, does opera get
much better than that?