The Proms are the worldís biggest classical Music
Festival. For eight weeks, they are a barometer of whatís happening in
music. The BBC broadcasts every Prom worldwide, online and on demand. With
this huge, international audience, the Proms are truly a worldwide
celebration, bringing music lovers together wherever they may be.

The Proms have a formidable reputation for excellence. Theyíve been
running for 114 years, almost without a break. Most concerts take place in
the Royal Albert Hall, a monument to the Victorian idea that culture advances
human progress. Nearly every significant composer and performer over the last
century has featured at the Proms, and the atmosphere is unique. To be in
this spectacular building when 7000 people are cheering is an amazing
experience, which the BBC captures remarkably well, supporting the broadcasts
with many extras on its comprehensive website ó they even tell you about
the mysterious ìProms sub-cultureî ! Many Proms are televised.

The Royal Albert Hall is famous for large scale orchestral music, but
opera, too, is heard to advantage. This yearís big event is Monteverdiís
Líincoronazione di Poppea. Itís a concert performance of the
Glyndebourne production, performed by the highly regarded baroque
specialists, Emmanuel HaÔm and the Orchestra of the Age of Enlightenment.
Glyndebourne is the epitome of ìcountry house operaî, where top quality
productions take place in glorious settings. The BBC Proms makes it possible
for everyone listening to catch some of the magic. This isnít one to miss
ó itís on July 31st .

Pucciniís Il tabarro follows on August 11th, with Barbara
Frittoli as Giorgetta and Lado Ataneli as Michelo. Ji?Ï B?lohl·vek is at
last being recognised as a superlative Jan‡c?k conductor, so Osud
on August 21st will be another highlight, particularly as B?lohl·vekís
work is seldom recorded. Even rarer is Rimsky-Korsakovís Kaschey the
Immortal on September 5th. Vladimir Jurowski conducts. Heís
been a sensation at Glyndebourne and at the South Bank, and this is his kind
of repertoire.

The Proms also bring Messiaenís St Francis of Assisi straight
from Amsterdam. Itís almost exactly the same cast, with Rodney Gilfrey as
St. Francis, and Ingo Metzmacher conducts the Hague Philharmonic rather than
the Residentie Orkest. This should be intriguing, as this 5 hour blockbuster
is quite an undertaking. Again, unmissable ! James Sohre reviewed the
original Amsterdam performance for Opera Today here. 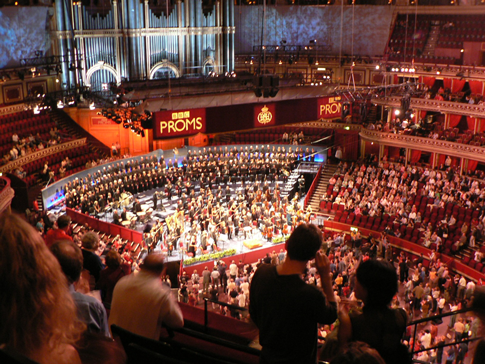 These operas are just the tip of the iceberg. Thereís also Verdiís
Requiem, Handelís Belshazzar, Jan‡c?kís Glagolitic
Mass (conducted by Boulez), Bachís St John Passion, and the
massed choir spectacular that is Messiaenís La Transfiguration de Notre
Seigneur JÈsus Christ. Among the singers who will be heard are Karita
Mattila (Strauss Four Last Songs), John Tomlinson (excerpts from
Boris Gudunov), and Angelika Kirchschlager (Schubert). The famous
(or notorious, depending on your point of view) Last Night of the Proms is
always an experience, but Beethovenís 9th Symphony which always
features before the Last Night. ìAlle Menschen werden Br¸der, wo dein
sanfter Fl¸geln wieltî. People all over the world are brought
together, wherever The Proms ìwingsî can reach. Nothing expresses the
ethos of the BBC Proms spirit better ! And thanks to international
broadcasting and the internet, the dream can come true, for a while.

The BBC Proms website with a link for listening may be found here.