On a single disc comes the very early, if not exactly first, stage work of the master, the one-act comedy La Cambiale di Matrimonio. Torvaldo e Dorliska just fits on two very full discs; called a “dramma semiseria,” its music doesn’t make it sound even “demiseria.”
The characters of La Cambiale will be familiar to anyone who has seen one of the more popular Rossini comedies. There are the foolish parent/guardians trying to block the romantic intentions of their children/guardians, and a comic interloper central to the plot’s inevitable happy resolution. The fun twist in La Cambiale comes with this latter character, here a Canadian named Slook who has signed a contract to wed the daughter of a European business partner. This early satire of New World brashness isn’t subtle, but retains some freshness. 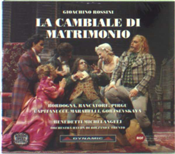 This 2006 performance bubbles and blusters energetically, if with no particularly distinguished voices. As the “bartered bride” of a daughter, DÈsirÈe Rancatore’s bright tone defines the character well but can prove wearing to the ear. Fabio Maria Capitanucci hams it up Canadian-bacon style as Slook. The idiomatic orchestra performance is led by Umberto Benedetti Michelangeli.
A cast of contemporary distinction benefits the Torvaldo e Dorliska recording. Soprano Darina Takova, tenor Franceso Meli, and a strong mix of baritone/basses (Michele Pertusi, Bruno PraticÚ, and Simone Alberghini) do their best with the material; without their efforts, this silly story couldn’t hope to deserve much attention. An impossibly noble and pure couple, the title characters, must deal with the dastardly machinations of the Duca D’Ordow, who wants the lovely Dorliska for himself. Despite the high passions and violent effusions, Rossini’s score often sounds as perky and even comic as that of La Cambiale . Which isn’t necessarily bad, since Rossini writes delightful music. Without a moment’s dramatic convention, however, the piece feels very long indeed.
VÌctor Pablo PÈrez conducts the Orchestra Haydn di Bolzano e Trento, the same talented group as in the other recording. A fine DVD exists of the comic one-act; it might prove even more entertaining than this decent recording to those with a interest in early Rossini. Unless OperaRara gets around to it, this Torvaldo e Dorliska will probably be the only option for this opera. Dynamic’s sound in natural and detailed, without any of the intrusive stage noises that have marred some of their releases in the past.
Chris Mullins