Yet like most composers
confronted with such a setback, Puccini immediately set to work revising
Madame Butterfly. The second version opened three months later in
Brescia, this time to resounding acclaim. Puccini, however, modified the
score yet again for Parisian audiences in 1906. Although this last rendition
is now the most common, Opera Theatre of Saint Louis turned to the Brescian
Butterfly for the 2008 summer season. Among other differences, the
late Colin Graham stated in an August 2006 directorís note that this
version allows the inclusion of scenes which ìsoften the friction between
two cultures and the boorish attitudes of Lt. Pinkerton.î Yet rarely have I
seen a Butterfly with such a distasteful Pinkerton. Perhaps
unrelated to questions of conflicting versions and revisions, Opera Theatre
of Saint Louisís 2008 performance of Butterfly succeeded vocally
and visually, but left for me a stronger than usual aftertaste of colonialist
guilt.

Soprano Kelly Kaduce is a familiar favorite at Opera Theatre after turns
in Suor Angelica and last yearís Anna Karenina. In Act I,
Kaduceís Cio-cio-san was sweet, understated, and insecure ó all
appropriate for the 15 year-old bride. Kaduceís dulcet voice suits this
role well, and lends youthful believability to her interpretation. Kaduce
gained some additional scenes in this version, particularly a poignant final
confrontation with Sharpless. Her acting appropriately deepened as Act II
progressed; although Cio-cio-sanís unshakeable faith in Pinkerton still
hinted of adolescent obsessiveness, Kaduce pulled off the culminating death
scene with poised and powerful passion.

David Pomeroy sang Pinkerton rather loudly and passionately, with ringing
top notes. His tenor projected very well, though he at times lacked dynamic
and rhythmic nuance. Good-looking but completely callous, the English text
only highlighted Pinkertonís annoying range of jingoistic bluster and
female objectification. Perhaps this takes Butterfly a bit too
seriously, but this interpretation certainly emphasized the negative side of
the tenor (anti) hero. For those who like a contrite Pinkerton sobbing over
his misdeeds, Pomeroyís performance isnít for you. The audience seemed to
agree, judging by the ìjokingî boos that Pomeroy received during the
bows.

The rest of the cast was vocally solid, with Lindsay Ammannís Kate
Pinkerton getting a bit more to sing than usual given the alternate version.
Ammann has a rich mezzo-soprano voice, with good projection in the lower
register. Jamie Barton sang Suzuki with a creamy mezzo-soprano and excellent
diction, and kicked up the pathos a notch with her devotion to Cio-cio-san.
Lester Lynchís ringing baritone portrayed Sharpless as a man tormented by
ethical unease. The orchestra negotiated the difficulties of Puccinian rubato
very well, with a few minor ensemble glitches. Margaret Stearns and Colin
Grahamís translation eliminated many of the clunky stresses and archaisms
of some other English versions.

This Madame Butterfly achieved a beautiful simplicity notably
lacking in certain other productions from OTSL this season. The lacquered
black floor, the clean lines of the latticed dividers, the simplicity of rice
paper and truly gorgeous lighting meshed harmoniously with the flowered
kimonos of the Japanese women and the fin-de-siËcle attire of the
American characters. Some of the furniture in this Butterfly
wouldnít look out of place in an IKEA store, but worked well when paired
with the simple props of a tea set or a small devotional altar. Much was made
of the movements of the singers themselves. Colin Graham cited the Japanese
Kabuki theatrical tradition as his inspiration, where highly polished stages
necessitate special styles of walking. All of the ìJapaneseî characters
in this opera moved differently than the Americans, highlighting cultural
differenceís role in this tragedy. This was the lasting impression of this
production, a well-sung testament to the fact that in opera, love and
imperialism donít mix.

Jacques Offenbach: The Tales of Hoffman, edited by Michael Kaye
and Jean-Christophe Keck. 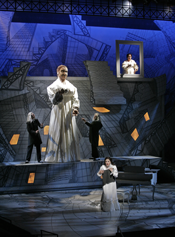 Ailyn PÈrez as Antonia in The Tales of Hoffman. (Photo by Ken Howard courtesy of Opera Theatre of Saint Louis)
If Opera Theatre of Saint Louisís production of Madame
Butterfly embodied the simplistic aesthetic, the 2008 production of
Jaques Offenbachís Tales of Hoffman offered quite the opposite
perspective. Obviously Hoffmanís plot is convoluted in and of
itself, with the tenorís love interests incarnated as a single soprano but
known as Olympia/Antonia/Giulietta/ Stella. The villains
Lindorf/CoppÈlius/Doctor Miracle/Captain Dapertutto are also envisioned as a
single bass-baritone entity, with a mezzo doing double duty as the Muse /
Nicklausse. Offenbachís death in 1880 likewise left the score a
labyrinthine mess of sketches, revisions, and too much material for
musicologists to resist. Literally thousands of pages of Hoffman
have come to light in recent decades, all leading to newer versions of this
opera, which will in all likelihood never reach a ìstableî state. Stage
director and costume designer Renaud Doucet and AndrÈ Barbe admit that ì
if everything found so far were to be performed in its entirety, the opera
would be endless. This might satisfy the scholars but exhaust the patience of
any audience!î Yet all this confusion somehow became a mantra for this new
production. Doucet and Barbe ask: if Hoffman is a labyrinth, what if
Offenbach himself is the one misleading us through it, hiding parts of the
score and even inserting himself as a character? I equally wonder whether
increasing the confusion of an already messy opera didnít manage to
likewise exhaust the audienceís patience.

This version begins with a twist, centered on the 1880 unveiling of
Offenbachís splendidly gilded memorial. A man (likewise gilded) comes
dashing onstage, frantically snatching at music pages falling from the
rafters. Voil‡! Offenbach, a new character inserted into his own opus. His
first appearance drew chuckles from the audience, but as the opera continued,
these intrusions seemed more and more unnecessary and illogical. We see
Offenbach mincing around Hoffman during the Prologue; he wanders onstage to
ìplayî the cello at various points in the opera; he conducts with an
enormous baton at the top of the set, peering down at his characters. Prior
to Act III, Offenbach casually rifles through the pages of his score,
selecting a few at random to hand to the conductor. Wounded in the jealous
fray between Hoffman and Giulietta, the composer is eventually killed by his
own character. Does all this meta-plot really take us any further? At times
the intrusions were merely comical, but at others, Offenbach was extremely
distracting. The ìrealî Offenbach saw Tales of Hoffman as his
only chance at serious opera, making it a strange twist of fate that his
small golden effigy is running around onstage diverting attention from his
efforts.

The staging, sets, and costume design seemed to suffer from this same
overabundance of riches. The overall conception mixed beautifully rendered
historical references with a few needless grotesqueries. The Third Empire
style loomed large in the Offenbach memorial and a gorgeous model of the
MusÈe díOrsay clock (which sometimes reveals a naked woman). The central
motif of the labyrinth is present throughout, usually in M.C. Escher-inspired
backdrops and flooring. Spalanzaniís house reeled with lime green cloaks, a
dwarf robot, strange spectacles, tin machines, and the Orsay clock. What was
more befuddling was Act IIís similar urge to excess. At the voice of
Antoniaís dead mother, a huge doll appeared, eventually manipulated by six
Dr. Miracles. The dead mother peered over this entire spectacle from the top
right of the stage, encased in a picture frame. Needless to say, all this
brouhaha slightly eclipsed Antoniaís death scene. With the appearance of
Giulietta, the Venetian setting elicited an incredibly elaborate world of
courtesans, sea-horse headdresses, and again the Orsay clock.

Despite the almost overwhelming visual and narrative choices of this
production, the vocal element mostly supported this massive edifice. Soprano
Ailyn PÈrez (spelled by Pamela Armstrong for a few performances) was
appealing and impressive in the four main soprano roles. She seemed most
idiomatic as Antonia, with her impassioned but diseased character recalling
PÈrezís 2007 OTSL turn as Violetta. Her voice soared in the central
section of Hoffman, especially in the opening romance and the
closing trio. As Olympia, PÈrez was a stellar mechanical doll. Her costume
was so outlandish it was almost distracting (especially the metallic
dÈcolletÈ), but her jerky movements properly amused the audience. Her Doll
Aria was well-acted and decently sung, though some of the rubato seemed to
stem more from technical difficulties than interpretive license. She lacked a
truly bell-like tone, again sounding more at home in her lyric moments than
as a coloratura. The audience found PÈrez truly loveable, cheering her
loudly at the operaís end. 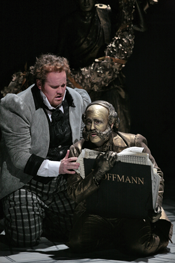 Garrett Sorenson as Hoffman and Matthew DiBattista as “Offenbach” in The Tales of Hoffman. (Photo by Cory Weaver courtesy of Opera Theatre of Saint Louis).
Garrett Sorensonís Hoffman sometimes lacked necessary power, though
Sorenson is clearly capable of nice open singing, evidenced by his song to
Kleinzach and many of the scenes with Antonia. Sorensonís main dramatic
problem lay in his awkward stage movements, which tended to handicap any
dramatic interest. Jennifer Johnson sang beautifully as the Muse/ Nicklausse,
with a lovely tone to her mezzo. Unfortunately, Johnson sang the entire opera
covered in heavy gilt makeup, stemming from her turn as the Muse (or an
anthropomorphized statue from Offenbachís memorial). Kirk Eichelbergerís
villains were likewise occasionally sabotaged by stage silliness, such as the
multiple Dr. Miracles and giant stage doll. As Dapertutto, he got laughs
rather than chills as he stole the soul of SchlÈmihl. His voice had nice
rich moments, particularly the second trio of Act II.

The chorus was excellent and really charmed the audience from their first
appearance. The orchestra was generally good, although there were a few
ensemble problems in the strings the night I attended. While it was exciting
to hear an English version of the OpÈra-Comique spoken dialogue, most of it
fell flat due to stilted declamation by the singers.

This Tales of Hoffman has a gorgeous sweep and sparkle to many of
the sets and costumes. The fantastic element really comes alive in the
juxtaposition of Third Empire references, machines gone awry, and fearlessly
vivid colors. Perhaps some of the productionís most distracting
complexities will magically disappear prior to Boston Operaís 2008
performances.