Only recently he returned to the opera stage, earning cautiously positive notices at Covent Garden in the title role of Verdi’s Don Carlos.
One signpost of his career’s advancement before the crisis had been his signing with Deutsche Grammophon, often considered (rightly or wrongly) the premiere label for classical artists. So it was in March of 2007 that the tenor recorded the Italian recital disc, Cielo e Mar, and participated in live performances of La BohËme with Anna Netrebko in Munich the following month, which DG recorded. 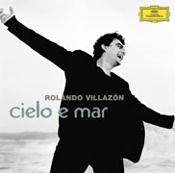 The recital disc covers a wide range of 19th century Italian opera composers, including the Brazilian-born AntÙnio Carlos Gomes. The pieces reflect VillazÛn’s questing intelligence, with the more well-known arias, such as the title “Cielo e mar,” and two arias from Saverio Mercadante, as well as one from the afore-mentioned Gomes. Giuseppe Pietri’s romanza from Maristella may not seem like a known item, but its warm melody struck your reviewer’s ears as familiar. Some may claim to hear evidence of the tenor’s coming crisis, but where exactly? The studio recording captures the tenor’s instrument in strong, handsome form. The occasional resemblance to Domingo remains (including some tightness of high notes), yet VillazÛn’s personality shines through – warmer, more romantic than Domingo’s pained heroism. Daniele Callegari supports the singer well, with the increasingly busy Orchestra Sinfonica di Milano Giuseppe Verdi.
The live recording of BohËme does find Villazon’s instrument a tad raspy, and the tightness a bit more worrying on the highest notes. It was a NYCO television broadcast of the tenor as Rodolfo that first brought him renown in the USA, and he still has the youthful, poetic soul for the role. Arguably the true star of this performance, however, is Anna Netrebko’s Mimi. From start to finish, she is in fine form, full-bodied, sensitive, unapologetically gorgeous. Despite the fullness of her delivery, she still manages to characterize Mimi’s growing fragility. DG assembled a cast of younger singers of note for the other Bohemians; the refreshingly smaller-scaled Musetta of Nicole Cabell, paired with Boaz Daniel as Marcello, alongside StÈphane Degout and Vitalij Kowaljow, doing excellent work as Schaunard and Colline.
Conducting the Bayerischen Rundfunk forces, Bertrand de Billy enforces some odd pauses, perhaps to facilitate aspects of the live performance. Whether to accommodate the singers or simply his own interpretation, he pushes the tempo a bit at times, possibly to effect greater excitement, then slows down to highlight the drama. It’s not an erratic performance, and certainly the musicians play well. A listen to Beecham on his classic set might make some listeners wish for the same confidence from de Billy in Puccini’s music.
The booklet note claims that this CD will also serve as a soundtrack to a film version. Your reviewer has no other information, but the photo stills in the booklet, if from such a film, suggest a very handsome production.
Many an opera fan may feel that his/her collection has enough sets of the Puccini classic. The recital disc contains enough that is rare, and is of such high quality overall, that any fan of fine tenor singing needs to give it a listen. As well as to wish Mr. VillazÛn continued good health.
Chris Mullins