In the most recent ìMozart yearî (they seem to come around often), companies stretched out to find lesser known corners of Mozartís repertoire, and La Finta Giardiniera found itself staged around the world, almost as if it had just been rediscovered in some dusty drawer. Both DVDs discussed here come with 2006 copyrights. Though neither cast features ìstarî performers, the Zurich staging might seem to have more prestige. Conductor Nikolaus Harnoncourt leads the Orchestra ìLa Scintillaî of the Zurich opera house, with soprano Eva Mei and upcoming tenor Christopher Strehl in the leads. In the Stuttgart version, Alexandra Reinprecht and Norman Shankle take on those roles. Both productions can fairly be called modern stagings, with the spare, pastel aesthetic your reviewer calls ìCrate and Barrel.î However, the Stuttgart designers, perhaps surprisingly for a house with a reputation for boldness, stick to fairly traditional costuming. In Zurich, the singers cavort in contemporary threads.
What matters, however, is that both of these DVDs give fair evidence that La Finta Giardiniera has been unwisely neglected. Mozartís melodic flair had not matured when he composed the score, but putting aside the lack of instantly memorable tunes, the music is always dramatically apt and frequently inventive. The opening of act three, in particular, has the sort of sweet, sad atmosphere of one of the great piano concerto adagios. And what once might have been considered the librettoís weakness of a diffuse, confused scramble of mismatches and pained redemption, actually plays quite well in the 21st century ó certainly better than the faux-religiosity of The Magic Flute. 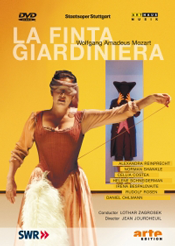 The Stuttgart production gives the back story in a pantomime under the overture. Count Belfiore had caught his beloved, Violante, in a compromising situation and assaulted her, with a knife yet. She recovered and fled, and he has gone in search of her. She calls herself Sandrina now, while working as a gardener for the mayor of a small town. A niece, a female servant, and a visiting knight are thrown into the mix, with the comings and goings at some points resembling the first act action of Don Giovanni ó and La Finta Giardiniera is also called a ìdramma giocoso.î
As directed by Tobias Moretti, the Zurich staging has much more ìgiocosoî than that in Stuttgart. In fact, the comedy gets played up a bit broadly, although Eva Meiís stricken Sandrina manages to be affecting throughout. The clean white set features two beds of various cacti, a not too confusing symbol for the pain that has sprouted in these loversí hearts. Moretti goes in too often for silly pantomime skits between numbers, which partly explains why this is a two disc set, as opposed to the single disc for the Stuttgart version (Stuttgart also appears to have cut some numbers). Although the comedy gets a bit broad, this Zurich production overall features more impressive singing and the dynamic leadership in the pit of Harnoncourt. Unfortunately, the booklet note tends to the obtuse, and without a plot summary, some viewers may find the action confusing.
The Arthaus Musik DVD for Stuttgart delivers an exemplary booklet, with a fine essay on the opera, a summary, and artist biographies. Furthermore, as directed by Jean Jourdheuil, the action comes across with great clarity, although the set never really establishes any particular locale (neither does that in Zurich). Jourdheuil references the comedy when appropriate, but the emphasis is on the mental distress and confusion of the wayward lovers. When they all congregate in a darkened garden, they wear lighted goggles, and still fumble around in the dark, unable to really locate each other.
If only the cast were more interesting to listen to. A former member of San Francisco Operaís Merola program, Shankle has a very pleasant tenor, though he hardly seems like the violently jealous type. Alexandra Reinprecht, decent enough, only makes Eva Mei look all the more impressive. The other voices make no special impression, excepting the annoying gruffness of Daniel Ohlmannís mayor.
So true Mozart lovers who have yet to get to know La Finta Giardiniera should probably find room in their budget for both these DVDs. If that canít be done, itís a choice between better singing (Zurich) and a more comprehensible staging (Stuttgart). And opera companies looking to broaden their repertory (are there any such in the USA?) should give this early Mozart work another look.
Chris Mullins