Some popular fare was indeed provided in the
Arena Sferisterio, the mid-19th-century building originally hosting a local
variety of the pelota game. That destination accounts for the immoderate
length of its 100-meter stage, a tough challenge to directors and set
designers. The acoustics are miraculous, anyway, and the seating capacity,
after the latest downsizing out of safety reasons, still amounts to a
respectable 2,500, second only to Veronaís awe-inspiring 14,000. Yet even
such huge venues are regularly sold out for Carmen and
Tosca – those typical evergreens for outdoors arenas – as proved
this Summer by their competing productions in Macerata and Verona, just days
apart. 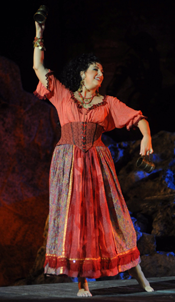 Ildiko Komlosi as Carmen in Verona (Photo by Tabocchini e Gironella)
Macerataís new Carmen marked the debut in opera direction for
the home-child Dante Ferretti, the set designer who scored no less than nine
nominations and two Oscar Prizes from the American Academy (he is currently
collaborating with Martin Scorsese on a film called Shutters Island,
from Dennis Lehaneís novel, due to be released within 2008). Despite his
involvement with Hollywood pageantry, Ferretti devised a minimalist set
drawing from Francoist Spain during the 1930s-40s, as depicted, among others,
by LuÌs BuÒuelís movies and Ernest Hemingwayís novels. A dusty square,
a humble fountain in cast iron, two period lorries in various degrees of
dilapidation, a few bicycles, two posters announcing a bullfight: that was
nearly all. No colorful dragoons were around, only Guardia Civil
policemen donning their ominous black monteras; therefore, with
handguns instead of sabers, the duel between JosÈ and Zuniga was confined to
a soon-aborted drawing. Lilas Pastiaís tavern in Act 2 was portrayed as a
pretentious bordello for the lower middle-class, where whiskey was sipped
instead of manzanilla and stylish French tango danced instead of
flamenco or habanera. Too bad, however, that some
shabbiness cascaded from the stage into the pit, where Carlo Montanaroís
conducting sounded weak, almost defeatist. The singing cast fared well
overall, with Irina Lungu a sexier and more assertive MicaÎla than usually
expected and Nino Surguladze vocally perfect but arguably too demure, even
lady-like, as Carmencita. If both ladies could exchange bodies or voices, as
in Thomas Mannís The Transposed Heads, it would fare even better.
As a passionate and lightweight Don JosÈ, Philippe Do from Vietnam ventured
a high D in his ìLa fleurî. If not perfect throughout, his unconventional
performance was stimulating. Alexandra Zabala as a warbling Frasquita and
Simone Alberghini an Escamillo of funereal distinction rounded up the
company. To all that, Sergio Rossiís clever lighting and prima
ballerina Anbeta Toromani from Albania contributed a touch of class.
Toromaniís amazingly long-limbed body seems a display of pinnacles and
acute-angled forms. Whether in a traditional pas de deux or in
modern free style, she can entice with serpentine motions of a very intimate
character, then suddenly whirl through the air like a winged flower. 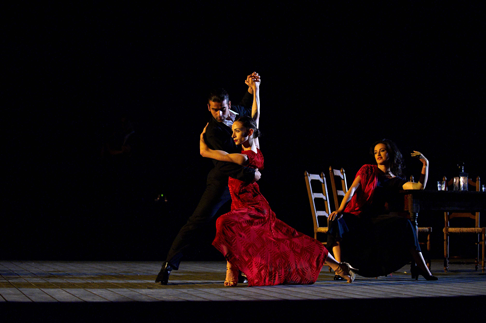 At Verona, with Daniel Oren on the podium, Zeffirelliís Disneyesque
reconstruction of Spain after Bizet found a show-stopping protagonist in
Ildiko Komlosi. The Hungarian mezzo sang with great precision and feeling:
her capricious rubato was compelling for sensualism, as was the stubbornly
dark sound of her lower register. Her presence seemed to inhabit the
extra-large stage despite the presence of a distant snow-covered Sierra and
the terrific overflow of side-action involving children, soldiers, toreadors
and hosts of socially-coded extras, flamenco dancers, live animals. I counted
no less than five horses and four donkeys of diverse breed and size, whose
unplanned contribution to the stage props caused a thrill when Don JosÈ,
holding a navaja in his hand during the duel scene in Act 3, barely
avoided a slippery spot. With the only exceptions of a fresh Elena Mosuc as
MicaÎla and the bustling participation of El Camborio, a Verona-based
company specializing in Spanish folk dance, the rest was just routine. Thumbs
down for the male principals, regretfully. Portraying Escamillo, baritone
Marco Di Felice lacked the macho appeal of the toreador who would lure Carmen
away from Don JosÈ. His low pitches wobbled since his very entrance, thus
spoiling his Toreador Song and making his appearance among the smugglers
rather unmemorable. Early during his performance as Don JosÈ, Mario
Malagnini showed intonation problems both in the lower and upper registers.
Eventually, his voice opened up and acquired firmness during Act 3 (pretty
late, indeed), which allowed him to build a respectable finale, when he
poured out his murderous passion with some more convincing accents and a
correct stabbing technique – i.e. with his knife moving upwards. In the end,
the day was saved by Orenís deftly balanced conducting, flexible enough to
keep together the boisterous and the exotic with the lyrical in the overture
and the entríactes, while aptly emphasizing dance rhythms, shivers
of tragedy, and even those finely-wrought ensembles (such as the dizzyingly
counterpoint-ish quintet ìNous avons en tÍte une affaireî in Act 2)
which easy-going conductors tend to treat as mere showpieces or perfunctory
comic relief.

That a first-rate conductor may make the difference also in large arenas,
where the patrons are supposedly more interested in lavish stagings and
muscular voices, was equally proved true by Daniele Callegari at Macerata.
Under his energetic and nuanced baton, the resident ensembles Orchestra
Regionale delle Marche and Coro Bellini delivered a fine rendering of
Tosca. Tutti bravi in the company, despite a cold start for
both Tiziana Caruso in the title-role and Luca Lombardo as Cavaradossi.
Besides singing bravely, Riccardo Massi (Spoletta) and Noris Borgogelli
(Sciarrone) looked like a consummate duo of rogues, virtually
indistinguishable from each other. But the biggest sensation was Claudio
Sgura in the role of Scarpia. Still in his early thirties, the Apulia-born
baritone couples firm tone, crisp utterance and dark fascination in the way
he stares around or dons his silvery costume as the loveliest villain ever
since Ruggero Raimondiís heydays. Is he the next Raimondi, as his fans keep
claiming? Time will tell. Massimo Gasparonís integrated reconstruction of
clerical Romeís architecture and customs, if not faithful to the least
detail, was fascinating and duly oppressive. Despite some controversial
precedents, Pier Luigi Pizziís pupil (and freshly adopted son) seems to
have reached the conclusion that, pace many a self-styled
directorial genius, there is nothing wrong in trying to meet the
librettistsí and the composersí stipulations for any given opera as to
its setting in time and space.

This is certainly the case with Tosca. ìIn Tosca,
history is definitely in the foregroundî, declared Hugo de Ana earlier in
2006. ìTherefore I wouldnít feel happy about making the soldiers wear
Nazi uniforms, as is the fashion today, because the atmosphere I want to
project is that of the early 19th century at warî. His sober statement
strikes a dissonant note within the choir of his European colleagues, who
usually delight in peppering their productions with dismissive arguments
about ìtrashy [original] dramaturgyî, boring historical background,
clumsy librettos, and so on. Actually, the plot of Tosca is firmly
embedded in history: June 15, 1800, in the aftermath of Napoleonís victory
at Marengo, and against the backdrop of three extant landmarks in downtown
Rome: SantíAndrea della Valle, Palazzo Farnese and Castel SantíAngelo.
However, De Ana pushes his ëprovocationí further: ìI donít think
[Puccini] wished to convey a particular interpretation of the Church, the
Vatican, or to project a negative idea of religion itself. Itís simply
there, creating a background to historyî. Good news is that, while giving
up with fashionable ego-trips, a director needs not abjure his or her
creative knack. 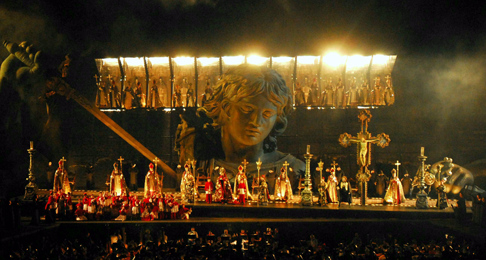 Being in total control of the Arena production of Tosca, revived
this season with ever-growing acclaim, De Ana strikes the winning move by
placing on the center-stage a clone of Romeís Angelo di Castello,
an 18th-century bronze statue of the archangel Michael towering on the top of
Castel SantíAngelo. Between the open arms of that gigantic lad from heaven,
who is holding a drawn sword in his right hand and a rosary in the left, most
of the action develops amidst a turmoil of Correggio, Giotto and Bernini
masterpieces, while period artillery shoots scented salvos from the outer
wings, and a backdrop resembling a bronze wall opens now and then, displaying
faceless bishops (Roger Bacon-style), a jail and more. Without time machines
or sundry brainwave, the outcome looks as surrealistic, avant-garde and
disturbing as one could wish. As Cavaradossi, Marcelo Alvarez conquered once
more through hyperdramatic singing and acting, granting the traditional
encore of his climactic ìE lucevan le stelleî. Chinaís Hui He delivered
a vibrant Tosca. She lacks neither good looks, nor soft-grained lyrical
tones, nor generous utterance, but appeared sometimes at loss with an
unwieldy velvet cloak and did not concede an equally sought-for encore for
her ìVissi díarteî. Sensitive conducting from Giuliano Carella and
ovations for everybody. Fifteen minutes of roaring applause, stamping and
yelling in several languages from an audience of 14,000 suggest that opera
can still count as a muse for the masses.