Others can continue the battles over his reputation as a figure in the political world of his time, both artistic and historical. For your reviewer, itís simpler to listen to the recordings and respond to his achievements with a baton in hand. 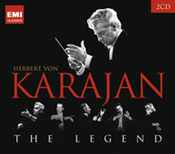 And a hand on the recording studio mixing knobs, or at least, a hand on the shoulders of those who had their actual hands there. The studio records under consideration -DGís Opera Intermezzi and EMIís compendium, Karajan the Legend – both reflect Karajanís virtues and defects. The immaculate musicianship never wavers. In fact, so uniform is the style and interpretation that on the EMI set, composers as different as Debussy, Berlioz, and Schubert all seem like compositional cousins. Strings dominate, slick and thick. Tempos tend to a weighty trod, as if under the burden of the conductorís profound vision. What that profound vision might be resists easy definition. In Bizetís suite from ìLíArlÈsienneî on the EMI set, the dark colors make the piece sound like a very abbreviated Mahler symphony. On one hand, it sounds great. On the other – what has this to do with Bizet? The Bolero from this collection never seems to reach its climax, as it is tightly controlled by the conductor and starts almost inaudibly. Two CDs of excerpts (including symphony movements) with the conductor constantly in search of some ideal orchestral sound finally becomes a wearing experience. 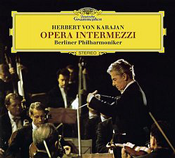 That same languid pace dominates many of the selections on the DG Opera Intermezzi disc. Your reviewer might retitle it ìOpera Interminablezzi.î The prelude to Traviata reaches four and a half minutes, suggesting Violetta died not in a fever but in a narcoleptic swoon. Strings smother the pathos of Pucciniís intermezzi from Manon Lescaut and Suor Angelica. Would Mantovani have produced much that was different if he and his ensembles had recorded Mascagni and Cilea? 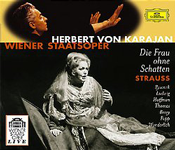 Now turn to the two DG sets from the archives of the Vienna State Opera. Karajan is a different man in the opera house, caught live. In both the Strauss and Beethoven, Karajan leads performances of energy, with a steady pulse and colorful detail. The Die Frau ohne Schatten really is a revelation. Karajan lightens the textures in many places, reminding a listener that this Strauss also composed Ariadne auf Naxos. Lovers of the opera – who tend to the cultish – will be dismayed at the cuts (and a change in scene order in act two). Itís their loss if they deny themselves the pleasures of this performance. Leonie Rysanek , the Empress, is in fine voice, and that means she is indomitable. Walter Berry and Christa Ludwig are the Dyer and his wife. Ludwig shows here – and also in the Fidelio – that she could handle the demands of a soprano role with intelligence, and as doesnít happen all that often, the Dyerís wife comes off as less of a harpy. Jess Thomas as the Emperor and Grace Hoffman as the Nurse provide fine support, and Lucia Popp, early in her career, turns up in two smaller roles, including that of the Falcon. Unfortunately, that role occurs either offstage or far backstage, and the mono sound, otherwise warm and clear, doesnít capture those voices satisfactorily. Such are the variables in most live recordings, and the strengths of this one suggest forbearance will be rewarded.
The Fidelio, however, has much more compromised sound, narrow and muted. In both overtures (Karajan plays the Leonore III before the final scene), the loud passages get too rambunctious, but the sound loses color with the volume adjusted. Itís unfortunate, because the performance otherwise has it all over Karajanís later studio version, highlights from which your reviewer recently wrote about for OperaToday . Ludwig, as mentioned before, presents a great Leonore, handling the challenges of her big scene with skill and taste. The booklet note claims that Jon Vickers was indisposed, but the huskiness of his voice works well for the character of a starved, abused prisoner. And how about Gundula Janowitz and Waldemar Kmentt as Jaquino and Marzelline? They hold their own with the leads and Eberhard Waechter (Don Fernando) and Walter Berry (Don Pizarro). Oh for a better recording…
So the choice here is between the homogenized sound of the studio recordings and the imperfect audio but more inspired live performances. Forget ìthe legend,î go for the conductor.
Chris Mullins