Richard Jones’s production of Macbeth last year,
whose big blocks of set and full-chorus choreography didn’t made it to
the Proms, ended up a shell of its former self, and the voices that had
sounded impressively powerful in the intimate Sussex theatre were, if not
lost, then at least diminished in effect when transferred to the Hall.

The fact that Robert Carsen’s production of
L’incoronazione di Poppea was relatively austere to begin
with, starting off at Glyndebourne with little more on stage than a big red
curtain, meant that it was destined from the start to transfer successfully
to the Proms, in a semi-staging by Bruno Ravella. 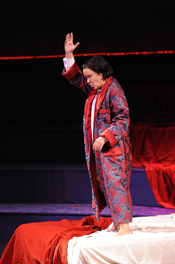 The central relationship between Nerone and the upwardly-mobile sex kitten
Poppea was portrayed quite unconventionally. The two began the opera drunk
with lust and longing for one another, but as the drama progressed, it was
clear that Nerone was gradually becoming aware that Poppea’s lust for
power and position had overtaken any genuine love towards him. His resentment
grows to the point that as he promises to make her Empress, he barely stops
himself from striking her – and though he still cannot resist her, most
of the final duet was sung from opposite sides of the stage, with the two
hardly looking at one another. Poppea gets what she wanted, but for Nerone
it’s an empty celebration.

As thought-provoking as it was to see their relationship from that angle
it isn’t a concept that’s borne out by the music. From the very
beginning, we are told in no uncertain terms that it is going to be a victory
for Love over both Virtue and Fortune, and at the end the sinuous
intertwining lines of ‘Pur ti miro’ are clearly a musical
evocation of a couple united in erotic love. Though historical sources relate
that Nero later killed Poppaea by kicking her in the stomach while pregnant,
this is not something that casts a premonitionary shadow over
Monteverdi’s score. It is not even an idea which sits well within this
staging, given the constant presence of Cupid (Amy Freston) as a sort of
master of ceremonies.

In other respects it was a lively performance, with the comic episodes
brought off really sharply. The two Nurses were both sung by men in drag
– Poppea’s nurse Arnalta was the larger-than-life tenor Wolfgang
Ablinger-Sperrhacke, while Ottavia’s nurse, sung by counter-tenor
Dominique Visse, was a more subtle creation, all pursed lips and disdaining
looks. The interchange between the Page (Lucia Cirillo) and the Damigella
(Claire Ormshaw) was brought vividly to life. 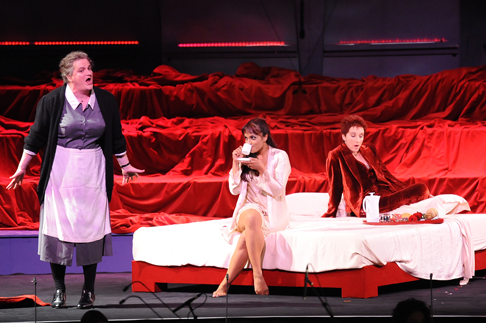 Musically, Emmanuelle HaÔm and the Orchestra of the Age of Enlightenment
never let the lengthy score drag, and the cast was very strong, with Alice
Coote’s smoky-voiced Nerone particularly striking. Besides Coote, the
other vocal highlight was Tamara Mumford’s warm-voiced, impassioned
Ottavia, even if Nerone’s complaint about her ‘barren
frigidity’ raised a laugh thanks to Mumford’s advanced stage of
pregnancy. The role of Poppea seems to lie well for Danielle de Niese’s
soft-grained soprano, and she looks wonderful although she does have a
tendency to overact. Only Paolo Battaglia, as Seneca, sounded dry and uneven,
though I did find myself wondering, given the forces – a chamber
orchestra and smallish voices – quite how successful I would have found
the performance if I’d been sitting up in the rear of the Circle or
standing in the Gallery.