Van den Heever, a woman of tall elegance, gained praise in 2007 when she replaced the scheduled
Donna Anna in a San Francisco Don Giovanni. She sang her first aria with the requisite exuberance
and underscored the poignant melancholy of Elsa’s recollections. 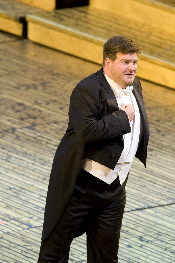 Michael Weinius (tenor)
Weinius brings the richness of the baritone that he once was to his work as a tenor and his choice of the
Parsifal excerpt documented the intellect that goes into his work. Whether, however, his voice is large
enough for American houses remains to be seen. In the 2900-seat McCaw he was at best adequate.

Van den Heever and Weinius each received an award of $15,000 ó along with prestige that will
greatly further their careers. At the finals Van den Heever was also voted Audience Favorite. The
German mezzo, Nadine Weissmann, was chosen its favorite by the members of the Seattle Symphony
Orchestra for the program. 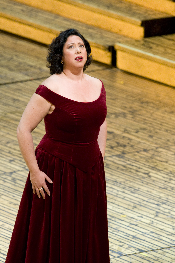 Nadine Weissmann (mezzo-soprano)
At the finals Weissmann sang “Weiche, Wotan, Weiche” from Das Rheingold and Waltraute’s
narrative from Götterdämmerung. Weissman, who has sung several supporting roles in Wagner
performances, is also highly regarded for her incarnation of Carmen. At the competition it was her
command of the tragic undertones of Waltraute’s account that was impressive.

“The judges agreed that we had eight fine finalists,” said OS general director Speight Jenkins in
announcing the winners on the McCaw stage. ” I feel that the level was even higher this year than in the
first competition in 2006,” said Jenkins.” It was a hard-fought decision for the two winners, but a great
one.”

Israel’s Ascher Fisch, SO principal guest conductor, was on the podium for the finals. He opened the
program with an appropriately festive account of the Meistersinger Overture.

Jenkins and Fisch selected 30 semi-finalists from the 50 singers who had submitted audition recordings.
They chose the eight finalists from this group at auditions in Munich and New York. The singers were
between 25 and 39 years old and had not appeared in more than one major Wagner role in a major
opera house. These competitiors arrived in Seattle a week before the finals for coaching with SO staff
members David McDade and Philip Kelsey and also with Fisch.

Founded in 1963, the Seattle has gained a reputation as one of the world’s leading Wagner companies.
Three production of the entire Ring des Nibelungen have been performed by the SO in 35 cycles since
1975.

The competition was made possible by a grant Seattle’s Charles Simonyi Fund for Arts and Sciences.
The Simonyi grant also supports other education outreach at Seattle Opera.

Detailed information on the program can be found on the Seattle Opera website,
http://www.seattleopera.org.

Adding to the artistic excitement of the competition was the August 14 recital by Ben Heppner that
brought a crowd to McCaw Hall. Born and raised in neighboring British Columbia, Heppner sang his
first Walther von Stolzing in a Seattle Opera Meistersinger in 1989. He has been closely associated
with the company since then and made his role debut as Tristan there in 1998. Unfortunately, at the
recital Heppner was suffering from the effects of an laryngitis attack two days earlier and was not in
best voice.

In the German section that opened the program ó Wagner’s “Wesendonck” Lieder, plus songs by
Schubert and List, his voice sounded strained and metallic and was capable of only limited dynamic
coloring. Far better were the five songs by Henri Duparc that opened the second half of the program.
Here Heppner again sang with radiant warmth.

Heppner then turned master entertainer in several English-language songs. He tore off his tie, opened
his collar and engaged the audience ó to its delight ó in easy banter between such favorites as
Earnest Charles’ “Let My Song Fill Your Heart” and “The House on the Hill,” along with Sigmund
Romberg’s “Serenade” and Oley Speaks’ “Sylvia.” And although he sang Nicholas Brodzky’s “Be My
Love” with dedication, his work with the song did not cause elders in the audience to forget the manner
in which Mario Lanza had belted out this once-popular song.

In half a dozen encores Heppner included two of Wagner’s “greatest hits:” Sigmund’s “Winterstürme”
from Walküre and Walther’s “Preislied” from Meistersinger. Lehar’s “Yours is My Heart Alone” was
warmly welcomed by the audience. 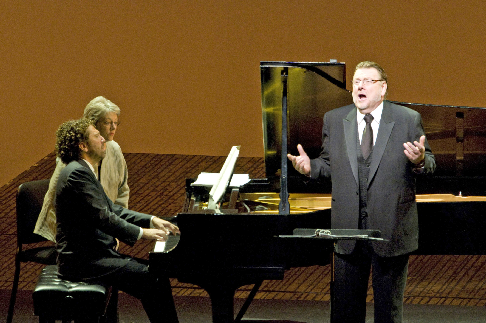 Yet one worries about the difficulties that frequent plague Heppner ó such as the Tristan cancellations
at the Metropolitan Opera last season. At only 52, he should still be free of such problems.

In the recital Heppner’s impressive partner at the piano was SO principal conductor Asher Fisch, SO
artist of the year in 2006/2007 and for over a decade music director of Tel Aviv’s Israel Opera.

The two artists performed on a stage set for Verdi’s Aïda, which removed them from the front of the
McCaw stage.