These two discs from the excellent Naxos series dedicated to great film scores offer convincing evidence for this disparity in fame. Although not as individual as his work for Alfred Hitchcock, Herrmann’s music for “The Snows of Kilimanjaro” and “Five Fingers” reflects both his professionalism and his talent for evoking a dark-tinged romanticism (perhaps best displayed in the score for “Vertigo”). On a very distant other hand, Perry’s work for some PBS-produced adaptations of classic Mark Twain texts conforms to outdated forms, with minimal harmonic interest and predictable scoring (especially the expected banjo obbligato).

The gushing strings and muscular horns of Herrmann’s music for “The Snows of Kilimanjaro” adheres to the conventions of a big studio Techincolor adventure/romance. The edgier quality Herrmann brought to his classic Hitchcock scores may be missed by some; they’ll find some of the quality in the excerpts from “Five Fingers” (an overlooked gem of a film as well). All the music is well-served by William Stromberg and the Moscow Symphony Orchestra, who have done such admirable work in most of the CDs from this Naxos “Film Music Classics” series. 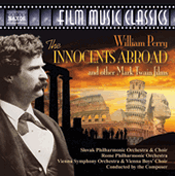 Composer William Perry himself leads the orchestras in the disc of his music from films adapted from Mark Twain’s writings. Yes, orchestras, as the Slovak Philharmonic, Rome Philharmonic, and the Vienna Symphony Orchestra all found themselves with the not exactly taxing task of performing Perry’s music. Think of a hunk of Copland-esque music, with all harmonic interest and rhythmic vitality stripped away. However, in the disc’s final selections, from “The Mysterious Stranger,” Perry finally produces some passages with more tension and darker colors. That fifteen minutes or so, however, may not compensate for the drabness of the rest of the material.

The disappointment of the Perry disc aside, the Naxos “Film Music Classics” series has mostly presented treasures, and this disc devoted to Herrmann’s music is one such.