Not the Falstaff. Luca Ronconi’s staging moves the action up to 20th century Britain, with the housewives thoroughly middle-class, in costumes suggesting a 1950s’ time frame. However, Falstaff’s henchmen sport punk hair stylings and accouterments, and the Fat Knight himself is a rouged, bleached sleazebag, just another glass of potted wine away from total dissolution.

Christoph Wagenknecht’s handsome sets for Die Entf¸hrung aus dem Serail have a kaleidoscope effect, with a mix of ornate Arabic designs adorning screens and lattices. The costumes of Catherine Voeffray have the imagination and detail of the best film costumes. But their work is let down by the pedestrian direction of Eike Gramss. Dialogue scenes stop time, with leaden pauses and perfunctory movement. The key casting of Entf¸hrung, oddly enough, is the non-singing role of the pasha Selim. If he does not have the power and charisma needed, the drama falls flat, and though Markus John is not wholly inadequate, his scenes never come to life. Rainer Trost’s Belmonte makes for a very bland hero, both as actor and singer. Eva Mei sings wonderfully as Konstanze, her technique more than capable in this very difficult role. But she seems so reserved, or self-possessed, that the drama never engages. Patrizia Ciofi and Mehrzad Montazeri outshine their co-stars as the other couple, and Kurt Rydl hams it up amusingly enough as Osmin. Zubin Mehta gives the star performance here, leading the Florentine forces in a dynamic, exciting reading of this great score. 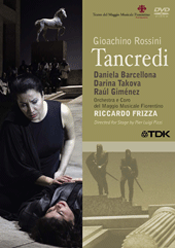 Besides directing, Pier Luigi Pizzi designed the sets and costumes for Tancredi. His impeccable taste means that the production pleases the eye, with the off-white marble flooring and columns contrasting well with the red, black, and white spectrum of the costumes. The challenge of staging any dramatic Rossini comes with deciding how seriously to take the largely preposterous goings-on. Pizzi’s decorous approach mostly skirts the risible without taking itself too seriously, although one silhouette effect of the hero (a pants role for mezzo) as he enters on a sailboat goes on a bit long and may prompt a giggle or two. An excellent cast delivers the bel canto goods, with Daniella Barcellona physically and artistically imposing in the title role, experienced tenor Ra˙l GimÈnez handling expertly the high line of his role, and Darina Takova moving her large voice around fairly nimbly. Riccardo Frizza and the Florentine forces keep the music moving without rushing. 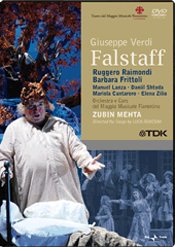 The decorous and tasteful don’t play a large role in Luca Ronconi’s Falstaff, with sets by Margherita Palli and costumes from Carlo Maria Diappi. Some fans of Verdi’s autumnal comedy will take offense at the updating (to a time-warp mix of late 20th century UK society, with the housewives in floral jersey dresses of the 1950s and Falstaff’s henchmen in the studded leather and dyed Mohawks of the ’80s and ’90s). Ruggero Raimondi’s portrayal will dismay some as well. Instead of the usual tubby charmer who may indulge a bit too much in ale and mead, Raimondi’s Falstaff has luridly bleached hair, rouged cheeks, and the bulbous belly of an alcoholic. In other words, this is a Falstaff who truly deserves a comeuppance at the hands of the wives, even if they strut and scheme with a self-confidence that borders on the arrogant.

For those open to Ronconi’s approach, this Falstaff will succeed in many ways. The set design enables a constant flow of fresh perspectives on the action, with the transformation to the forest in the final act a particular delight. The comedy now has the same edge and sharp pace of Verdi’s miraculous score, and with that wonderful veteran Zubin Mehta back in charge, not a delightful moment is wasted. It’s Raimondi’s show, and he owns every moment, but his supporting cast is right there with him. Barbara Frittoli has never been more beautiful or vocally appealing as Mrs. Ford, and Manual Lanza makes for a properly stuffy and smug husband. Daniil Shtoda and Mariola Cantarero don’t wear out their welcome as the lovers, and Elena Zilio’s spinsterish Mrs. Quickly, clinging to her handbag, brings a fresh look to the role. Note must be made of the hilarious Gianluca Floris and Luigi Roni as Bardolfo and Pistola.

All three of these DVDs have deserving qualities. However, if the Opera Today reader has a dislike for the more risky stagings, the Falstaff may not be advised, no matter how much it pleased your reviewer. The Mozart and Rossini are safe choices for lovers of those two operas.