The
24-year old composer’s sixth and his second to be staged, this opera is
a relatively little-known example of 19th-century French opera’s
obsession with exotica. Its mostly Oriental stories are populated by savage
primitives, and sexy virgin priestesses who in the course of the plot would
invariably fall victim to forbidden love. In The Pearl Fishers,
Bizet and his librettists were evidently feeling charitable: the guilty
passion for once does not prove fatal for the soprano. Instead, she is saved
by the villainous baritone, who belatedly discovers his inner hero, and of
course gets himself shot for his trouble.

The 25 September performance was generally of good quality. The orchestra
did well under the baton of Ciuseppe Grazioli. So did the chorus— when
it was on stage and was able to watch the maestro’s baton, that is; the
timing in the off-stage numbers was sometimes shaky.

Among the soloists, tenor Charles Castronovo as Nadir definitely stood out
from the ensemble. His popular Act 1 romance “Je crois entendre
encore” showcased the singer’s strong metallic timbre with
excellent projection in all registers. His softly beautiful high notes might
perhaps be criticized as too thin; I personally liked the pianos and
thought they were stylistically appropriate for a French opÈra lyrique, which
really should sound different from middle-period Verdi, although it rarely
does.

Baritone Trevor Scheunemann as Zurga offered a rich vocal timbre and good
blending in the ensembles, of which the famous Act 1 duet “Au fond du
temple saint” was a particular highlight of the evening.
Scheunemann’s solos were solid, but not particularly memorable. It
seemed to me that his concentration on the dramatic aspects of his
part— specifically, his character’s inability to decide whether
to play a village Count di Luna or Marquis di Poza of Ceylon— sometimes
got in the way of sound production.

French soprano Norah Amsellem as Leila was another solid choice in
casting. Despite her vocal excellence, however, the singer, like her
colleague Mr. Scheunemann, also seemed trapped in the inner contradictions of
her character. This time, the issue is not young Bizet’s inexperience
as a dramatist, but rather the ideological “baggage” attached to
the female lead in French Orientalist opera. Is she a virginal victim or an
exotic seductress? One of these two favored clichÈs demands pure, crystalline
high register and “floating” timbre with not much support; the
other calls for a throaty, rich low and middle range, with rare but powerful
highs. Although Ms Amsellem herself seemed to try charting some sort of
middle ground, the casting of this singer, a dramatic soprano, indicates the
director’s preference for the seductress image. As a result, in my
opinion, this Leila often sounded much too heavy for Bizet’s delicate
creation who, after all, is more Michaela than Carmen. 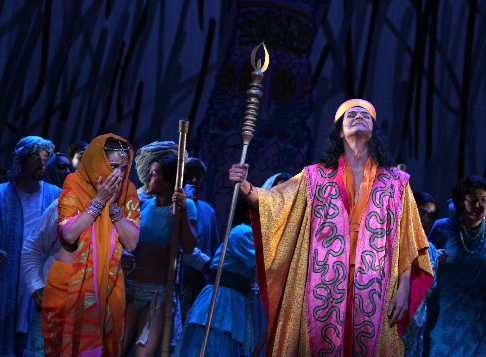 Norah Amsellem as Leila and Denis Sedov as Nourabad

Bass Denis Sedov as high priest Nouraband cut an imposing figure, but
despite occasionally powerful sound did not impress with either diction or
articulation. In this production, however, the very tall singer’s
towering physique was evidently more in demand than his vocal prowess. The
stage director, Australian Andrew Sinclair, has attempted to both dramatize
and modernize the story by superimposing a political intrigue ‡ la Boris
Godunov onto Bizet’s unsuspecting characters, with Mr
Sedov’s Nouraband serving as the evil “old order” genius
who masterminds the collapse of “liberal” Zurga’s rule.
Since no one told the composer about this particular plot twist, there was
little in the score to support it. Instead, it was delivered entirely via
stage business, which required a lot of “extra-curricular”
wandering about the stage from Mr Sedov who did manage to look suitably
menacing most of the time.

Another directorial attempt to make Bizet’s dramatically challenging
early work more palatable to modern audiences included the revamping of Act
3. It used neither the original love duet nor its common trio substitute, but
did entail Leila partially disrobing, then getting assaulted during her duet
with Zurga. Alas, the tedious scene was not at all improved by that
spectacle. It did, however, allow Ms. Amsellem to showcase once again
Leila’s fanciful costume of an orange sari wrapped around a classic
“Oriental” ensemble of a skimpy pink top with bare midriff and
the see-through harem pants.

The bright palette of reds, oranges, pinks, and turquoise greens dominated
the vibrant dÈcor by celebrated British fashion designer Zandra Rhodes. Among
the often striking visual effects she created, enhanced by the excellent
lighting by Ron Vodicka, particularly notable was the scene of Leila’s
first appearance— carried on a live chariot by six men, immobile like a
Buddha statue, her orange and gold veil spotlighted against deep purple
backdrop. Rhodes’ design ideas were always vivid and always intriguing.
What bothered me in her vision was the stylistic discontinuity between the
sets and costumes. The latter were colorful, with a nod to geographic
authenticity, and in tune with the production’s realist acting and
staging. The former— deliberately perspective-less, two-dimensional,
with fauvist-leaning color palette and a neo-primitivism-inspired
images— were anything but “real.”

The designer’s closest stylistic ally in this production was John
Malashock’s choreography, on display so much that it became almost as
ubiquitous as Ms Rhodes’ sets. Indeed, even by dance-crazy French
standards, ballet was often entirely superfluous, such as the number for what
was evidently the “spirits of fire” that provided the background
for the introduction to Leila’s Act 1 prayer. When staging The
Pearl Fishers, Mr. Sinclair outlawed “proper” ballet as
unsuitable for the subject; thus, there was not a pointed shoe in sight (or
any kind of shoe, for that matter, as all the dancers performed barefoot).
Rare nods to “Oriental” choreography were confined to
women’s numbers, which unfortunately suffered from weak execution (this
specifically refers to the quartet of Leila’s attendants). The male
dances, in a counterpart to Bizet’s imaginary Ceylon, offered a picture
of the “imaginary primitives” brandishing fighting pikes: their
movements were athletic, aggressive, and purposefully inelegant, with ground
stomping, angular hand and feet positions; pirouettes replaced by cartwheels.
The Act 3 finale opened with a pas de trois in The Lion
King-size animal masks— which was perhaps a little much, but it
did save the director a major headache of having to come up with stage
business for the endless choruses of this scene. 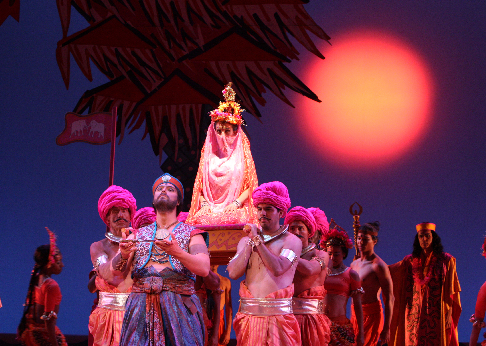 Overall, the Washington audiences were presented with a solid, colorful,
mostly traditional Les PÍcheurs de perles, well performed (despite
some misgivings on my part) by a consistently good cast. The production, which
runs through 7 October, offers few vocal fireworks; nor can it boast a truly
new word in staging. Yet, for an old-fashioned opera lover, after last
season’s symbolist Dutchman and Nazi-fied Tamerlano,
these realistic and suitably “Oriental” Pearl Fishers
might be a welcome relief.

All photos by Karin Cooper courtesy of Washington National Opera