No, this is not Berg or Birtwistle, nor some contemporary operatic essay on The Crunch, but the cool, clever and calculating Mr Cavalli and his ìLa Calistoî, first shown to the discerning and politically savvy public of Venice in 1651. Without a doubt, this production at the Royal Opera (Cavalliís somewhat overdue debut) is a sizzling success, and shows that Covent Garden could and should embrace the genre of early opera (not to mention ìmainstreamî baroque) more whole-heartedly in future. If opening night audiences were on the thin side, especially in the more expensive seats, this was no longer true come the second and third performances ñ word of mouth (and print) has seen to that. 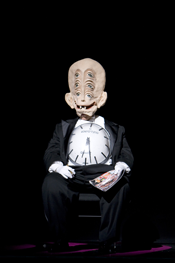 VÈronique Gens as Eternity
One of only two operas that Cavalli wrote with a mythological storyline, it is perhaps the best known today and has been revived several times, most notably by Raymond Leppard back in the 60ís at Glyndebourne. But since then early opera ñ or rather its interpreters ñ have galloped on, sometimes like a riderless horse, plunging on and off the track, but always seeking to find a permanent home in the stable of current repertoire. One of its greatest advocates on the stage is David Alden, director of many Handelian successes but new to Covent Garden, and with this ìCalistoî, first shown in Munich, he has cemented his reputation for melding old music with modern sensibilities.

First and foremost, Alden is a collaborator. Not for him the roughshod riding of some European directors over text and musical line; rather, he works closely with his musical director (here the redoubtable Ivor Bolton renewing his acquaintance from Munich with the Torrente edition of the original threadbare score) , his long-time scenic associates Paul Steinberg (striking, colourful sets) and Buki Shiff (shimmering cat-walk quality costumes) and his rock-solid cast of experienced period performers led by Sally Matthews in the title role. This Calisto is sexy, cynical, funny and sad ñ you leave the theatre feeling both uplifted and a little wiser.

Ovidís recounting of the story of innocent nymph Calistoís seduction, abandonment, and final metamorphosis from a bear into a heavenly star system is well known, but Cavalli and his librettist Faustini brought in a whole raft of supporting mythic characters ñ mainly comic – and a secondary plot involving the apparently chaste goddess Diana and her earthly lover Endimione. The music is a roller-coaster of almost-speech, scatter-gun recitative alive with wit, tender ariosi and dramatic, textually replete song, all supported by and entwined with the artistry of the OAE and Monteverdi Continuo Ensemble, led by a visibly-involved Bolton on the podium. This is opera as complete team-work, from early rehearsal through to performance, and it shows.

The vocalists were period-perfect, all real actor-singers. Sally Matthews has an individual, robust yet light-footed soprano that was in wonderful form as Calisto. Her sparkling top was matched with a warm and agile middle voice, occasionally let loose in the second half with real depth of tone and volume to reflect her anguish and incomprehension ñ a totally human sound in contrast to her god-like tormentors. Chief of these is the eternally-lascivious super-god, Giove (Jove) sung by the very experienced baroque baritone Umberto Chiummo who uses his warm tone and natural agility to great effect. His long-suffering wife, Giunone (Juno) is a smaller part but sung with panache and aplomb by Veronique Gens, whilst the supposedly ìchasteî Diana of Monica Bacelli is sung with a scampering delight in both text and music, shading her voice intelligently to reflect her inner conflicts. The only other human character besides Calisto is the rather dopey shepherd Endimione, love-lorn and languishing on various hillsides, and he is sung accurately but rather four-squarely by Lawrence Zazzo who doesnít quite capture the elegiac elegance of what is Cavalliís loveliest long-lined music. 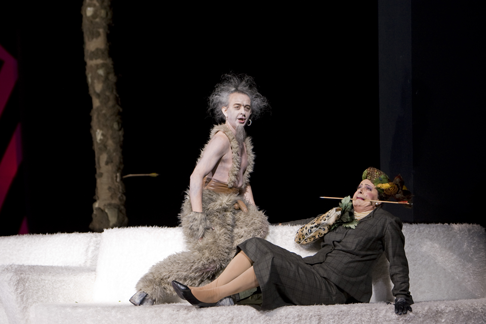 Unlike the later Handel, Cavalliís characters have strength in depth right down to the supporting minor roles and it is here that this production really rises above the merely good and becomes excellent ñ not to mention downright salacious and sexy. Marcus Werba as Gioveís oily side-kick Mercurio, Guy de Mey in hilarious drag as the sex-mad overweight nymph Linfea, Ed Lyon as a stomping Pane, and probably the delight of the evening, the ever-green Dominique Visse hilarious and repulsive as the randy half-goat Satirino, his athleticism and mellifluous braying (do goats bray? they certainly trill) a remarkable tour-de-force that had us in stitches. A whole raft of actor/dancers filled out the scenes, each beautifully and intriguingly costumed as mythological creatures ñ the eye was filled in a way that was matched by the interwoven magic of the words and music. If youíre tired of grey and empty sets, dark spaces lit by bare bulbs, come and enjoy opera as it should be ñ Messrs Alden and Bolton and their team will see to that.