Based, like its more well-known successor, upon Jean Nicolas Bouillyís
play LÈonore, ou Líamour conjugal, Paerís opera has many
textual similarities with Beethovenís drama of heroic rescue and noble
sentiments. The faithful wife who disguises herself as a boy in order to
reach and rescue her unjustly imprisoned husband forms the core of both
works; yet, in Paerís opera it is not Leonora but the flighty daughter of
the jailor who actually releases him from bondage. Indeed, from the
light-weight dalliances of the opening moments to the exuberant,
self-satisfied moralising of the final sextet (echoes of Don
Giovanni or CosÏ?), Paer reveals himself to be more
comfortable with the world of petty intrigue and human foibles than with the
exalted idealism of Beethovenís utopian aspirations. 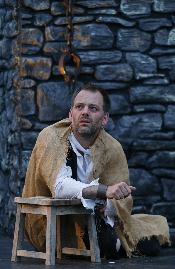 Michael Bracegirdle as Florestano [Photo © Anthony Hall]
That said, this imaginative, focused production by Bampton Classical Opera, directed and designed by Jeremy Gray ó and first presented under
gloomy summer skies at Bampton Deanery on 18 July ó made a strong case,
both musically and dramatically, for this infrequently performed work. Act 2,
in particular, revealed serious musical and dramatic intent, the dramatic
momentum of the recitative and the emotional intensity of Florestanís long
opening aria of darkness and suffering, proving surprisingly progressive.

Paer makes little distinction between the music of the two female roles,
Marcellina and Leonora/Fidele; both are high sopranos, but the star on this
occasion was Emily Rowley Jones, who expertly conveyed the spirited passion,
tempered by an essential kindness and innocence, of the jailorís daughter.
Rowley Jones possessed the stamina required of this demanding role, and her
voice remained well-centred and sweet throughout; virtuosic flourishes were
dispatched with apparent ease, and intelligently nuanced to serve the
dramatic situation. She brought Mozartian grace and wit to the opening
scenes; her movements on the small stage were well-choreographed and deftly
executed. It was through the dynamic contrast between Marcellinaís
unrequited passion for ëFideleí and her impatient dismissal of
Giacchinoís courtship that the drama gained vitality.

Both female roles demand a wide range and much staying power ó
Marcellina requires the compass of a Queen of the Night; in the title role,
Cara McHardy initially seemed ill-at-ease, her breath control a little
insecure and the more virtuosic passages not always firmly controlled.
However, as the performance progresses she showed herself on occasion more
than capable of rising to the challenges of the taxing coloratura and
bringing both meaning and beauty to her interpretation. Unfortunately her
lack of confidence dramatically was noticeable in the ensembles where she
appeared uncomfortable and at times vocally subdued. 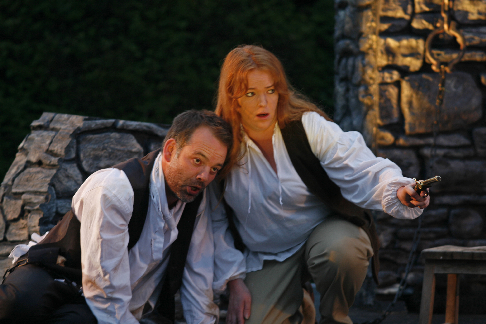 As in previous Bampton productions, Adrian Powter, as Rocco, revealed his
instinct for the dramatic moment, moving confidently and establishing a
strong stage presence. He injected appropriate weight and bluff into his
boasting tirades, which benefited also from excellent diction. Samuel Evans,
as the hapless prison janitor, Giacchino, similarly demonstrated sound comic
timing and nuance, and together they significantly contributed to the
dramatic momentum, which might have been hampered by the many long reflective
arias and by the extensive duet for Marcellina and Leonora in Act 2.

The challenges of the twenty-minute aria for Florestan which opens Act 2
are many; but Michael Bracegirdle proved himself able to shape the various
sections of his painful, desolate lament on his lengthy suffering in the
darkness into a convincing whole, employing an extensive dynamic range and
sensitive tonal variations. 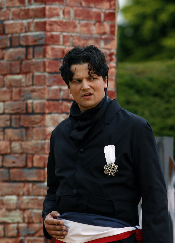 Jonathan Stoughton as Pizzarro [Photo © Anthony Hall]
Despite the foreboding guillotine and imposing dungeon walls which
dominated the set, it was difficult for the cast to inject any real menace
into Paerís drama. There is no prisonerís chorus to emphasise the themes
of imprisonment and despair; and Pizarro, the prison governor, is a rather
unconvincing stage-villain ó his comic arrogance emphasised here by his
Napoleonic cape and eye-patch. His bluster may be less than threatening, but
Jonathan Stoughton sang securely if a little blandly. It was not
Stoughtonís fault that, following a rather feeble confrontation with
Leonora, Pizarro found himself cast in chains, and one immediately forgot
about him. Indeed, there is a deflation of dramatic tension towards the close
of Act 2: the arrival of Marcellina, demanding a marriage proposal from
ëFedeleí somewhat dispels the threat of violence, and the arrival of Don
Fernando, sung here with warm radiance by John Upperton, swiftly and
effortlessly restores harmony and accord.

However, Paerís opera does have many notable features, not least its
strong melodic character. This is evident from the first bars of the
overture, a seemingly simple medley of forthcoming themes, which has an
original feature in the heroineís romantic ëmottoí theme, heard three
times here and subsequently reiterated most effectively at crucial points in
the action. Throughout the orchestration surprises and delights: while the
rather clichÈd trumpet call introducing the sinister dungeon setting and the
three percussive chimes announcing the hour of Florestanís murder may fail
to send a shiver up the spine, overall the writing revealed some striking
colours, exploiting unusual instrumental combinations, especially for the
woodwind. The score was well-executed by the London Mozart Players. Situated
behind the imposing set, conductor Robin Newton led them in lively fashion;
indeed, he set off at a pace which left the singers somewhat trailing in the
orchestraís wake, anxiously glancing at the distantly-placed monitors; but
secure ensemble was quickly restored and the overall balance between soloists
and orchestra was well-judged.

Paerís Leonora is an excellent example of its genre ó a
semi-seria opera, in which the frivolous and tragic co-exist and interact. It
may be that the comic plot slightly overshadows the high drama of wrongful
imprisonment and tyranny, but this intelligent, well-paced production by
Bampton Classical Opera made a convincing case for the composerís melodic
lyricism and left this listener eager for another opportunity to hear this
unfairly neglected work.