The Bartok featured a spare set with ghostly lighting effects and puppets, and ended with Samuel Ramey’s Bluebeard garroting Denyce Graves’s Judith onstage with her flowing red scarf. Later, in his manic Schicchi, the bird puppets from the Bartok made a reappearance, linking the two productions.

In contemplating a full staging of Puccini’s brilliant (if unwieldy in terms of length and staging requirements) Il Trittico, LAO decided to dispense with Friedkin’s earlier Gianni Schicchi but to ask the director to create productions of the first two parts of the triptych, Il Tabarro and Suor Angelica. For the comedy, Placido Domingo realized a long-held desire to employ Woody Allen. This show opened the 2008-09 season, and as seen on Sunday, September 21st, it proved to be a successful venture, although with a striking difference in directorial approach between the two Friedkin sections and that of Allen.

Santo Loquasto’s designed traditional sets for the first two operas, impressively scaled and detailed. Friedkin had a cramped front stage area for Il Tabarro, once Michele’s barge has drawn up to the wharf. Without the option of theatrical effects, Friedkin proved to be a rather routine stage director, with nothing very imaginative in his handling of the actors. Licitra’s Luigi stuck his thumbs in his belt like a member of the Lollipop Guild, and Mark Delavan’s Michele looked ready to kill someone from the moment he barged off his barge. Anja Kampe, however, portrayed a truly touching Giorgetta, vital if not obviously young, and sensual without deserving the harsh judgement of her husband when he suspects her of adultery. Matthew O’Neill slightly overplayed the comedy of his drunken Tinca, if enjoyably so, but both John Del Carlo (actually luxury casting for such a small role) and Tichina Vaughn as the husband and wife Talpa and Frugola made an interesting dramatic contrast to the sordid triangle at the heart of the drama.

Besides taking the acting honors, Kampe also sang with a feminine power that suggests she should look into some other great Puccini roles. Licitra is finally gaining control of his spinto instrument, although when it came time for his final big moment on the folly of jealousy, his voice didn’t ring out with quite the volume he had mustered earlier in the evening. Delavan had all the gruffness needed for the darkness in Michele, but the sad and lonely side that might evoke some pity hasn’t developed yet. Friedkin did find a way to suggestively link his two operas, as he had done before: this time, when the songseller appears, two nuns join the crowd. 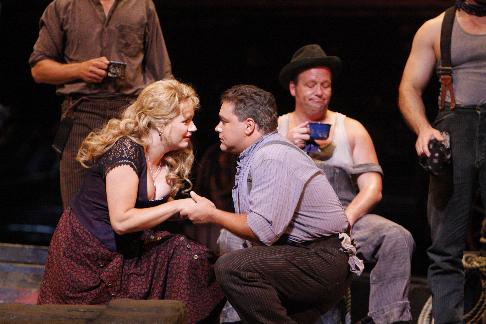 Loquasto’s convent for Suor Angelica had one somewhat original touch, a grated entrance for the appearance of the Principessa, which also provided a dramatic exit after her character has delivered her devastating news to Angelica and gotten the desired signature on a legal document. Larissa Diadkova not only had all the imperiously dark tones for the role, but also a forbiddingly dark visage from the rear, as she walked away from her prostrate niece. Otherwise this was Sondra Radvanovsky’s show, and she triumphed. Her huge voice didn’t float the highest notes, but her threading down of the volume had the desired effect. Radvanovsky’s Angelica appeared sad from the start, so her suicidal impulse made sense, but the singer also did well by the tricky moment when Angelica realizes she has committed a mortal sin and begs Mother Mary to save her. Here, Friedkin went full out, with a Mary figure in flowing robes descending from the rafters, as the son of Angelica appears from the chapel. Freidkin even had another sister appear to witness the miracle. That went over the top for your reviewer, but the amount of sniffling and sobbing in the audience provided evidence that it worked for many.

After two settings presented much as they might have looked at the opera’s debut, Loquasto, for Woody Allen, went for an updating of Gianni Schicchi. We were somewhere in mid-20th century, in a huge room with a metal-works circular stair leading to a loft with no ostensible purpose. There was almost no bare space for an actor to sit, with knickknacks and housewares strewn everywhere, not to mention the spaghetti noodles still in the pot where the will would be discovered (and that spaghetti, dangling from the will, became a classic running joke that went on past its effective date). Allen has directed for the stage before, and his films tend to be more talk than action as well, so it may not be a surprise that he proved more adept than Friedkin at moving the singers around and getting individual performances from each of them. Jill Grove filled out (amply!) a truly malevolent, and ultimately murderous, Zita. Andrea Silvestri’s muscular bass pushed other voices to the side as his former-mayor character strutted around the stage. Best of all, Allen found a way to make the two lovers interesting. Saimir Pirgu not only sang with the sort of hormonally-charged tenor voice needed for Rinuccio, but managed to be quite funny as well. Even better, instead of being an airheaded “daddy’s girl,” Jennifer Black (subbing for Laura Tatulescu) slunk on stage as a very physical Lauretta, with hips to kill, and if they don’t work, a stiletto in her garter. But Allen didn’t have to end the opera with the two youngsters getting down to business, or “up” to it, at the top of the circular staircase. 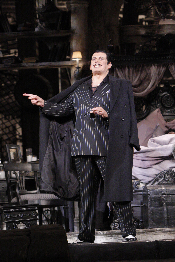 Gianni Schicchi: Thomas Allen [Photo by Robert Millard]
At the heart of all this farcical nonsense was Sir Thomas Allen, dropping trou with the best of them as a Sicilian underworld figure, in a dark pinstripe suit, black “wife-beater” t-shirt under his silk dress shirt, all topped by an imposingly shined and buffed head of black hair. Sir Thomas didn’t hold back, and as should be, once he strutted onto the scene, all eyes were on him. But if only he could have talked his director out of the misbegotten concept just before curtain, when the enraged Zita reappears and sends Schicchi to Hades with a knife thrust. Here special credit must go to the young actor who portrayed Gherardo and Nella’s son, Sage Ryan. This blonde tyke got thrown around the stage a lot, and when he cried over the dying figure of Schicchi, we shared his regret more than enjoyed any intended comic twist.

Since he came on board 2 seasons ago, James Conlon has made himself beloved here in Los Angeles, and the dynamic energy and sensitive shadings he provided these three great Puccini scores are typical of his fine work with the now first-rate LAO orchestra.

Il Trittico makes for a show of Wagnerian length (almost four hours on Sunday), but with as many merits as this production offered, it should figure in the repertory more prominently than it does. LAO now goes onto Madama Butterfly, for the third time in about 5 seasons. Your reviewer hopes this Il Trittico makes a comeback before Cio-Cio-san does.