Rimsky-Korsakov’s short opera focuses on relationships. Kashchey is
immortal, but he has a daughter, Kashcheyevna, who holds the secret to his
death. She’s just as cold and conniving as he is but she falls in love
with the Prince. The Storm Knight brings all four of them together, and the
Princess’s love triumphs. Kashcheyevna weeps, and her tears break the
spell that makes Kashchey invincible. Love conquers all, yet again.
It’s simple but affords opportunities for lushly Romantic musical
effects. Music as pictorial as this illustrates so well that meaning can be
visualised even if you don’t speak Russian. Kashchey’s music is
shrilly angular, evoking his harsh personality as well as the traditional way
he’s portrayed, as a skeleton, the symbol of death who cannot actually
die. The Storm Knight is defined by wild ostinatos, even though he’s
more of a plot device than a character. Some of the most interesting music,
though, surrounds Kashcheyevna. When she sings, there are echoes of Kundry,
or even Br¸nnhilde. Harps and woodwinds seem to caress her voice, so when her
iciness melts, we sympathise. While the other roles verge on stereotype,
Kashcheyevna is more complex, and Manistina impressed.

Stravinsky’s The Firebird, written a mere four years after Kashchey
The Immortal, inhabits an altogether different plane. While
Rimsky-Korsakov’s music embellishes the vocal line, Stravinsky’s
floats free. It “is” the drama. The ballet evolves from the music
rather than the other way round. Music for dance has to respect certain
restraints, so it’s necessarily quite episodic, but Stravinsky
integrates the 21 segments so seamlessly that the piece has lived on,
immortal, as an orchestral masterpiece. Vladimir Jurowski is still only in
his mid 30’s but has established a reputation for intelligence and
sensitivity. Watching him conduct this piece was instructive : he moves with
the grace off someone who understands how this music connects to dance. His
gestures were understated, yet elegant, his left hand fluttering to restrain
the sweep of the strings and keep the tone transparent. This pinpointed how
Stravinky wrote cues for physical movement into the music itself. Circular
woodwind figures translate into shapes of curved arms, flurries of pizzicato
into rapid en pointe. Dancers must hear levels in this music closed to the
rest of us, but Jurowski’s intuitive approach helps us appreciate its
depths.

The Firebird is a magical figure which materialises out of the air,
leading te Prince to Kashchey’s secret garden. Unlike the ogre, the
Prince is kind and sets the bird free. He’s rewarded with a magic
feather. This time the Princess and other captives are liberated by
altruistic love. It’s purer and more esoteric, and Stravinsky’s
music is altogether more abstract, imaginative and inventive. Jurowski gets
great refinement from the London Philharmonic Orchestra, with whom he’s
forged a very close relationship in only a year of being their Chief
Conductor. The solo part for horn, for example, plays a role in the music
like that of a solo dancer. Textures around it need to be clean as they were
here, so its beauty is revealed with poignant dignity. The rest of the
orchestra plays barely above the point of audibility, until the flute enters
carrying the horn’s melody. Later there’s more magic, when the
double basses and cellos are plucked quietly, building up towards the
crescendos which sound for all the world like the joyous tolling of great
bells. In the finale, trombones and trumpets hail the moment of liberation.
The trumpeters stand upright, so their music soars above the orchestra,
projected into the auditorium with superb, dramatic effect. 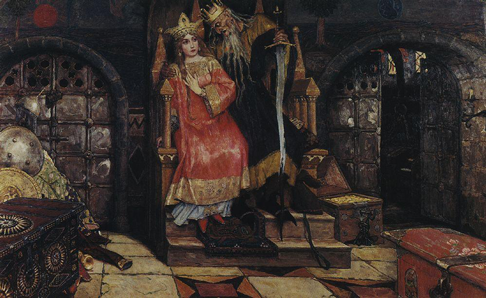 Kashchey the Immortal by Viktor Vasnetsov