Korngold’s third opera Die tote Stadt premiered in 1920 in
Cologne, the composer a mere 23 years old. Back then, opera remained a living
art form, with the likes of Strauss and Puccini keeping the public excited
about new works. The Met, not wanting to miss out on any of the excitement,
immediately grabbed this odd piece for its American premiere only a year
later. Korngold’s next opera Das Wunder der Heliane premiered
in Hamburg in 1927 but its generic musicality and moralistic satire failed to
ignite enthusiasm on either side of the Atlantic. Never mind though, it was
time to write movie music.

After its initial Met performances, Die tote Stadt had to wait
more than fifty years to again seduce American audiences with the heavy
nostalgia that permeates Korngold’s score. This time it was a brave
excursion into rare but revered repertory by America’s only adventurous
company of the time, the New York City Opera, where the 1975 Frank Corsaro
staging remained in its repertory until 2006. San Franciscans had to wait
even longer for Korngold’s enigmatic work.

Die tote Stadt is a masterpiece, at least in the hands of a stage
director able to superimpose the real and the imaginary, of an indulgent
conductor able to sustain its unending waltzes and revivals of a single tune,
of a tenor able to sing loud and long and high, and of a soprano able to do
the same as well as impersonate a cabaret dancer. All this the San Francisco
Opera brought over to us from the Salzburg Festival where it originated in
2004, with a brief stop in Vienna to pick up soprano Emily Magee.

Die tote Stadt is a tour de force for everyone involved.
The formidable role of Paul, the bereaved husband of the dead Marie, belongs
these days to Torsten Kerl, who continues on to London with this superb Willy
Decker production. Frank, Paul’s friend and finally rival for the
attentions of the dancer Marietta, is the third of the opera’s
formidable roles, particularly as it is tied to the Pierrot song and antics
of Fritz who taunts Paul in Marietta’s cruel commedia
dell’arte improvisation on death and resurrection. The staging of
this complicated scene (as well with the entire opera) was entrusted to and
effectively realized by Meisje Hummel, an assistant for the Salzburg
premiere. 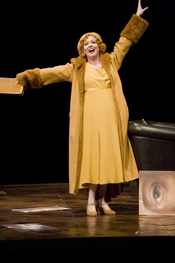 Emily Magee (Marietta)
There is no doubt that the piece casts its spell from the first note. The
San Francisco audience gave its immediate and full attention to
Korngold’s rich sound, conductor Donald Runnicles lovingly pulling
forth its thick and weighty sonorities from San Francisco Opera orchestra.
The big tune from the opera, “Marietta’s Lied” comes fairly
early but it is really a duet for Paul and Marietta (though it is far better
known as a stand alone concert aria for soprano), and this tune comes back
many, many times, finally as Paul’s wrenching farewell to his dead
wife.

The message of Die tote Stadt is simple – there is no
resurrection. It is a plain statement, unadorned with philosophic and
religious implications, forcefully presented with the full resources of the
post Romantic orchestra with expanded percussion. The Willy Decker production
assumes equal proportion in a conception that sometimes juxtaposes and other
times superimposes Paul’s present upon Paul’s past, resulting in
a confusion of life with dream that brings a whirling corporealness to what
is cold and dead. These are the brilliant designs of Wolfgang Gussmann whose
black boxes and shadowy abysses inhabited by Decker’s real people and
by their shadows. The production means are both enormous and delicately
expended. 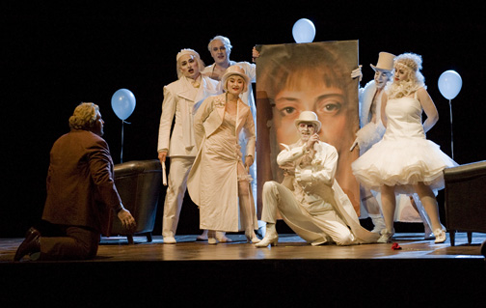 Donald Runncles resonated mightily with Korngold’s over-the-top
sonorities. Torsten Kerl is justifiably famous for the role of Paul. Emily
Magee brought impeccable musical taste and character dimensionality as the
nemesis of the dead wife. San Francisco Opera’s particular
contributions to its performances of the Decker production were adequate. The
Frank of Lucas Meachem fulfilled the formidable needs of this role, though it
lacked the weight as antagonist to counter balance the musical and dramatic
personalities of the production’s protagonists. The Brigitta of
Katharine Tier was similarly out of balance. The well-performed
commedia scene added enormously to the many pleasures of this
production.

All photos by Terrence McCarthy