(Not only for Mozart – his libretti for Martin y Soler and
Salieri are generically similar, their characters similarly self-aware.)

Take, for example – and I will explain my reasons for bringing her
up in particular – Donna Anna. As Brigid Brophy notes, in Mozart
the Dramatist, we will never know what passed between her and Don
Giovanni in the moments before the curtain rises – people have been
debating it for two hundred years, and each age, cynical or idealistic by
turns, guesses what it wants to guess from the evidence. We first meet an
Anna outraged at Giovanni’s attack – which is still in progress
– and only her own furious resistance prevents his easy success, and
then commences her unappeasable rage at her father’s murder. In
contrast, there is her tenderness for Don Ottavio in the prayer trio, and in
“Non mi dir” – such slight moments we might overlook them,
as those who don’t like Ottavio much tend to do – too, we
are a bit tired by the time “Non mi dir,” the
opera’s last aria, rolls around. Yet surely these are the normal Donna
Anna, the Anna who existed before abnormal events, assault and murder,
released a new, furious figure on Seville, and her life and relationships
– not least, her relationship with herself. That she asks Ottavio for
another year to ponder the events of the last 24 hours before she weds him
always raises a snicker nowadays (it certainly does at the Met), but that she
wants some time to breathe, to think, to understand the outrages that have
transformed the orderly world she was raised to believe in seems entirely
within character. Will she hold out for a full year of formal mourning? Will
she break down and elope – with Ottavio or someone more dashing? Will
she ever bring herself to yield to the too-courteous Ottavio? Mozart and da
Ponte preferred to leave us uncertain – they liked us like
that.

Some analysts – especially stage directors – do not agree:
Frank Corsaro insisted Anna was after the “Big O”; having had her
first sexual encounter and craving more – which seems to me most
unlikely for this formal, uptight woman in response to rape. It is nowadays a
clichÈ (perpetuated in Marthe Keller’s vulgar and ugly Met staging) to
have Anna yielding to Giovanni at the end of the opening trio, falling into
his arms right there on the ground, but no note of the music or word of the
libretto justifies such an interpretation, and the scene was never presented
this way until quite recent times. This view of Anna’s motivation is
not itself modern – in a celebrated tale of E.T.A. Hoffman. a bare
generation after Mozart’s time, the real Donna Anna appeared in
Hoffman’s box during a performance of the opera and explained that her
anger was all an act, concealing true love. This is not the way modern
directors see her either – they tend to regard Donna Elvira as the
devotee, Anna as a neurotic, a creature of artifice, of propriety, incapable
of – or at least out of touch with – genuine feelings. And G.B.
Shaw (a man without sexuality himself, whose creations seldom have much of
it) made his Ann the self-conscious mother of the future Superman, seeking
the proper father for such a being – which still does not explain why
she would choose Shaw’s sexless and misogynistic Jack Tanner for the
part. 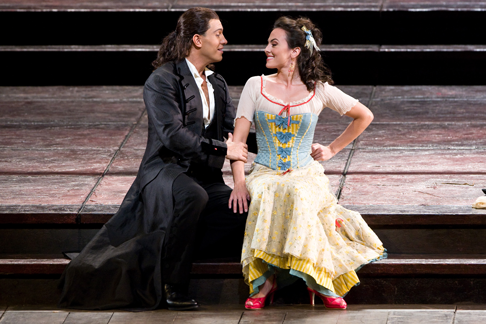 Erwin Schrott in the title role and Isabel Leonard as Zerlina in Mozart’s “Don Giovanni.”

Anna’s emotions must be examined because the music supports any and
all of these interpretations: Donna Anna must be in control of a
voice’s ornamental capacities both when howling for revenge and when
expressing dulcet sentiments to her faithful fiancÈ. She must be capable of
seizing our attention with the rages of her initial trio and duet, of holding
us through the long accompanied recitative of her narrative of assault and
resistance, of performing “Non mi dir” at the shank’s end
of a long night, and of still singing beautifully in the final sextet. (Some
directors finesse that by omitting the finale entirely. If the Anna is not a
brilliant singer, they will even cut “Non mi dir.”)

So it is that though I have heard perfect Don Giovannis, perfect
Leporellos, perfect Ottavios and Zerlinas and even (not often) Elviras, I
have never encountered, on stage or on recording, a perfect Donna
Anna – one who made the role complete, explicable, musical, at once
beautiful and irresistibly exciting. As with Norma or Tosca or Isolde, I do
not expect ever to hear one singer draw all the threads, the possibilities,
the range of this character into a single portrayal, and make it a thing of
beauty besides. 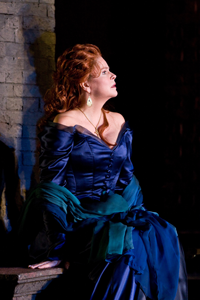 Susan Graham as Donna Elvira in Mozart’s “Don Giovanni.”
I bring all this up because the Met’s most recent Donna Anna,
Krassimira Stoyanova, comes about as close as I ever expect to hear. My date
said, “95 percent,” which I’ll accept; an older friend
said, “No one as good since Eleanor Steber,” whom I never heard,
but whose Mozart technique as recorded was nonpareil. My best Anna to date
was that of Carol Vaness in the early ’80s at the City Opera,
beautiful, fiery, classy, but lacking the tenderness, the occasional
vulnerability Stoyanova gives us at those moments when Anna is alone with her
own soul and need not put on an act.

Stoyanova, who is the toast of Vienna and Barcelona (her superb Desdemona,
Luisa Miler and Violetta can be heard on webcast from those houses),
possesses one of the most beautiful soprano voices before the public today.
In the prayer and in “Non mi dir,” it was impossible not to focus
on each note – one did not want to miss any one of them; one did not
want the moment to end. And yet it was not the beauty of the voice but its
range of color, the forceful statement of each phrase that riveted us during
the narration of Giovanni’s attempted rape that leads up to “Or
sai che l’onore.” She was all steel here, without sacrificing
beauty of tone: every word, every phrase meant something. Without
eliminating the possibility that Anna is covering something up while speaking
to her lover, she gave us a woman outraged, stirred and alarming, even to
herself. Her ornaments were tasteful and, as her Anna Bolena for Queler
demonstrated, capable of expressing rage and inner torment – but there
were turns in “Non mi dir” (where so many Annas come to grief)
that were less than ideal – her only such moments, and it was still a
“Non mi dir” that deserved – and got – the loudest
ovation of the night. The duet with Polenzani’s Ottavio during the
finale could have gone on all weekend for my money: I would never say hold,
enough! This is a singing actress of the rarest quality, as a vocalist and a
performer, and it is a tragedy for us in New York that the Met doesn’t
appreciate her. 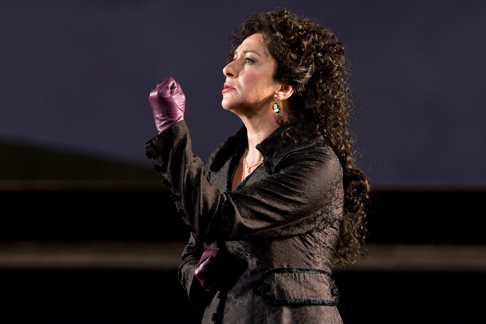 I had never heard Erwin Schrott before, and concur that he has the
swagger, the elegance, the wit, and the solid top-to-bottom lyric bass for
the role. He tends to play the charming Don rather than the brutal Don
– an ideal Don must be both. Somehow, Schrott has such fun acting the
role that he does not put his energy into singing its vocal high points. His
arias passed almost without notice – there was no sweetness in the
serenade, little exuberance in the Champagne Aria. I cannot remember if it is
Keller’s idea to have Giovanni without a mask in both the opening scene
(which obliges Anna to contort herself so as not to see him) and in the scene
with Masetto’s friends, when a mere hat would do. Was Schrott afraid to
conceal his pretty face? Or did the director fear audiences would be confused
by his disguise as Leporello? What confused me was how Anna could not
recognize him, and how a high collar could disguise him from Masetto.

Considering Scrott’s formidable height and muscularity, and that of
his voice, this was a surprisingly insubstantial Giovanni. 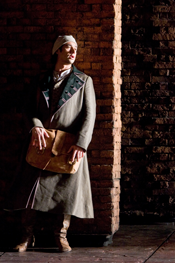 Ildebrando D’Arcangelo as Leporello in Mozart’s “Don Giovanni.”
Ildebrando D’Arcangelo (and, in the next performance, Ildar
Abdrazakov) seemed to be having the most fun of the evening. Keller seems to
like Leporello so much and to dislike Giovanni so much that she has given the
valet all the good moments. Scrott and D’Arcangelo played like
vaudeville partners, mugging and traipsing and interacting, and their delight
was infectious, but though this is certainly the most intimate relationship
of Giovanni’s life (in the libretto we often see one of the pair
imitating the other, or protecting, or cautioning), as played here it did not
allow much room for the ladies or the plot. They would play a good skit
on Don Giovanni; I’m not sure this allows us a view into the
opera as a serious drama.

Matthew Polenzani is one of the finest Mozart tenors now before the
public, and he has emerged as a favorite with Met audiences as well; his
“Dalla sua pace” was strong, but his breath control was not quite
up to “Il mio Tesoro.” For me, his finest singing all night was
the five minutes of duet with Stoyanova in the finale, when his, warm,
supportive sound acted like a ballet cavalier to his lady.

Susan Graham’s mezzo had no problem with the (slightly lowered)
music of Donna Elvira, and she wielded her height to make the scenes with
Leporello comic, but the instrument itself lacks the soprano sheen one
recalls of the greatest Elviras. It’s a pity that the Met has so many
mezzos on hand they have seem to have lowered this role as a regular
habit.

I don’t often approve of mezzos Zerlinas either, although that can
pass as long as this flirtatious but demure peasant bride is not a slut
sticking her rear end in the air in the middle of the public street, as
Keller (and too many other recent directors) demand. Isabel Leonard was in
some trouble on the tenth, and was replaced in Act II by Monica Yunus, who
also replaced her in the performance on the fourteenth – a short,
pretty woman with a bright, easy soprano of no obvious individuality. She
seemed able enough on stage. Both Zerlina and Masetto are obliged to do
rather complicated steps, mimicked by dancers, in their entrance duet –
an assignment Leonard and Yunus and their Masetto, Joshua Bloom, handled with
style. Bloom has a winning presence and a voice of great character and, well,
bloom – I look forward to his Figaro and Papageno. Here, after slamming
Marthe Keller, I must insert a word of praise: the scene in the Act I finale
where Leporello and Giovanni manage to separate Zerlina and Masetto, usually
so inexplicable, is very cleverly handled here, as Leporello sics a peasant
girl on Masetto, and she refuses to leave him alone.

Louis LangrÈ, the head of the Mostly Mozart orchestra, demonstrated who
his favorite composer is, drawing out the light, luscious touches that make
every Don Giovanni as much a revelation as one’s first. He
will return with the production this spring, with Peter Mattei’s highly
praised Giovanni.

All photos by Marty Sohl courtesy of Metropolitan Opera