There are many concessions which have to be made when touring on a budget, and nothing about this Falstaff was as big as it normally is. The score, which had several cuts, was performed in an (uncredited) arrangement for an orchestra of fewer than 30, and no chorus (the principals making up the vocal ensemble wherever appropriate). At London’s Cadogan Hall there is nowhere to put a backdrop, and all that survived of the adaptable touring set was a versatile set of blocks which transformed into the various different settings with the addition or subtraction of panels or furniture. The scene changes — given that Cadogan Hall has no curtain — were entertaining to watch, almost little scenes in their own right.
Daniel Slater’s production (revived by Hazel Gould) was performed in modern dress, and Act 1 Scene 2 used one of the favourite generic settings for contemporary productions, the luxury health club complete with sun-loungers. It was colourful but not very original, and the possibilities of the setting were ignored — why couldn’t Act 2 Scene 2 be set there too, with Falstaff being dumped in the swimming pool at the end? But no, for that scene we were in the traditional setting chez Alice, with the Thames running past the back door as per the original stage directions. At least there was one bit of business which utilised the unusual layout, with the orchestra to the right of the stage area; Falstaff hid from Ford by crouching next to the band and attempting to blend into the violin section.
Falstaff himself was also on a smallish scale, with minimal padding, but while the young Swiss baritone David-Alexandre Borloz lacked physical bulk, there was nothing insubstantial about his vocal resources, which were if anything a size too big for the intimate venue. James Cleverton’s Ford was also impressive. Rebecca Cooper’s neat, classy Alice was vocally secure, but dramatically she was upstaged by Emma Carrington’s sardonic Quickly and Margaret Rapacioli’s Meg with her wonderfully expressive eyes.
As Fenton, Patrick Ashcroft’s tenor was rather monochrome and lacked bloom in his lovely Act 3 aria, but he had a natural and charming stage manner, while Verity Parker’s Nannetta was a vocally appealing and believably youthful girl-next-door (though I couldn’t work out why was she made to wear a black cloak over her white fairy costume — she would have looked far more effective without). 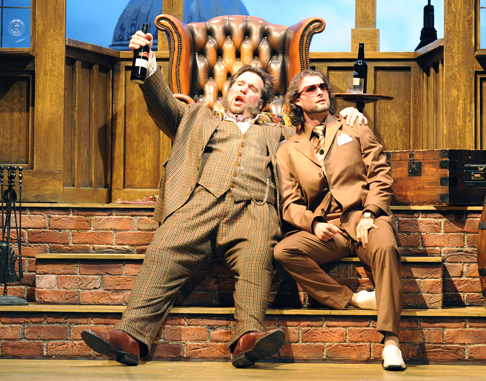 Alice Farnham conducted with vigour, but the limitations of the reduced score were evident throughout — the lack of richness in the opera’s musical texture was a significant loss to the piece. It was just as well that Verdi’s final opera (*not*, as the programme stated, his only comedy) is virtually indestructible, and that the cast was a more than solid ensemble. The joy of the final fugue could not have come across more effectively on the stage of a major international house.
Regrettably, the audience, too, was pared down — the small hall was far less than half full.
Ruth Elleson © 2008 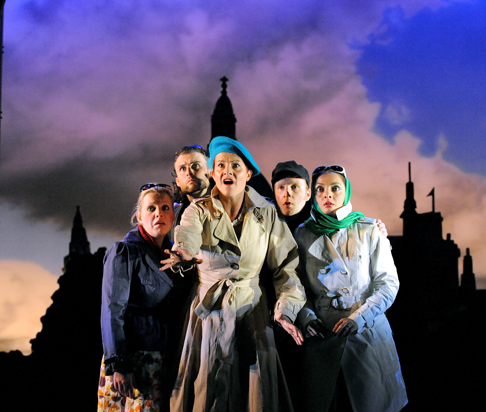 [**Click here for an excerpt via YouTube.**](http://www.youtube.com/watch?v=7nSiQVXt-rc&feature=related)
**[Editor’s Note: It is with deep regret to note that David-Alexandre Borloz (age 32) died in his sleep on 19 October 2008]**

All photos by Alistair Muir