Thus the *Turandot* staging new at Berlin’s Deutsche Oper this season is an eye-opener of quite another kind: Turandot make her entrance dressed in black from head to toe and with face veiled. She mourns the injustice of earlier generations that continues to dominate life in the undefined present, in which Lorenzo Fioroni has set the production.
With a minimalist single set by Paul Zoller Fiorini makes *Turandot*, performed with Franco Alfari’s long-traditional conclusion, a play-within-a-play, and it’s the people who — as in German Expressionist drama of a century ago — are the downtrodden mass hero of the story as he tells it. Aged Emperor Altoumi and his partners in power look down on the stage from a director’s box high on the rear wall. The people, clad in Goodwill-type glad rags, sit as spectators in rows of folding chairs facing the audience.
The bloodletting of repeated beheadings is the opium with which Altoumi manipulates them and keeps them in line. They cry out for yet another head to role, unconscious of the cruelty and senseless abuse of power involved.
Turandot and Calaf engage in their riddle game seated eye-to-eye at a small table downstage. For Fioroni it’s a TV quiz game. Interesting, but does it make sense? It does — even if traditional Puccini fans no doubt miss at first the Orientalizing excesses of familiar stagings.
What is new — and the real eye-opener of Fioroni’s production is the double patricide that concludes it: Turandot and Calaf each cut down the father responsible for the generations of horror inflicted on their people.
Yes, yes, yes. Calaf’s father Timur was deposed somewhere along the line, presumably — it is always implied — due to great injustice. Here one feels that alcoholic Timur lost out rather because the other guy had more toys. When the chips are down and the play is over, Timur sit down at the side of the stage — back to audience — and takes out a bottle from his camel-hair coat.
Many who see *Turandot* are troubled — to be sure — by the torture and suicide of Li˘, the only truly good person in the opera, for it is only she who knows what caritas, a truly selfless love, is. So is Fioroni, who suggests that with Li˘ Puccini composed himself into a corner and — unable to find a way out — left the opera unfinished. For him her sad fate hangs literally over the opera: her lifeless body is suspended above the stage in the hour of resolution. 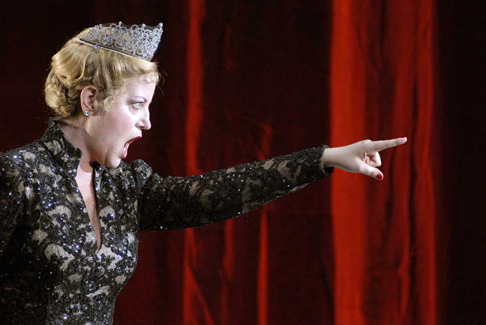 “These are people caught up in boundless hysteria,” Fioroni writes in the exemplary program book of the Deutsche Oper. “None of them is in a position to see the situation with a clear eye.” How otherwise can Calaf witness Li˘’s pain and still ruthlessly pursue an obsession that guarantees the continuation of the status quo? At the risk of sounding sit-com, can her meaningless death nourish happy love forever after? To keep the audience thinking with him, Fioroni eschews a Broadway finale and has the chorus sing its final “big number” off stage.
Undisputed star of the October 18 cast was Mario Zhang who stepped in for an ailing Carlo Ventre as Calaf. The Canadian tenor sang the role at Dresden’s Semper Oper early in the year and was immediately engaged by other European companies. His rich and robust voice, employed with ease even at the most demanding moments, suggests that he could be the tenor the world waits for.
Lise Lindstrom, who laid the foundation of her career with regional companies of her native America, is a near-ideal Turandot. Tall and lean, she is happily free of the mannerisms that can bring this role close to parody — and, of course, Fioroni’s approach leaves no room for brightly painted feline fingernails. While Lindstrom’s somewhat metallic voice underscores Turandot’s initial frigidity, greater warmth would have been welcome later. Yet she sings with power and enviable accuracy in all ranges. 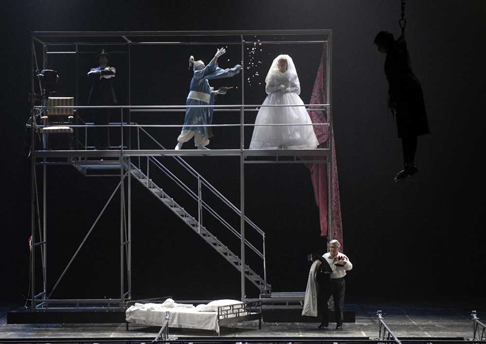 Without capitalizing on the sympathy that an audience always feels for Li˘, Balkan soprano Inna Los is an especially strong presence in this cast. (Yet one cannot stop wishing that Fioroni had been able to make his point without her corpse on stage for such an extended period.)
Paata Burchuladze, the Timur of the evening and still a major bass on the international opera scene a decade ago, has clearly reached retirement age, while Peter Maus, Altoumi in the cast and veteran of many years with the Deutsche Oper, remains an impressive tenor.
Ping, Pang and Pong, well-oiled cogs in the wheels of power as Fioroni sees them, were satisfactorily sung by Nathan Meyers, Jˆrg Schˆrner and Paul Kaufmann.
While Zoller’s designs intelligently supported Fioroni’s concept, his video projections were more movie- than opera-house and detracted from the strong story line of the staging.
Attilio Tomassello conducted an ensemble that now ranks high among Berlin’s many large symphonic ensembles. The chorus was superbly rehearsed by William Spaulding. 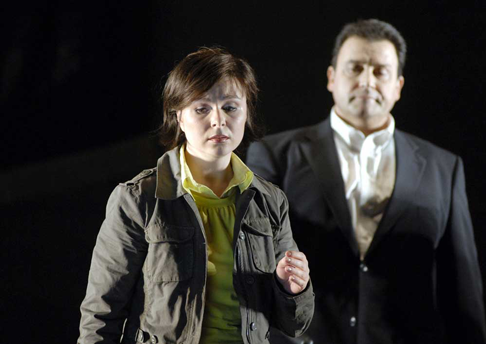 “An end with horror,” says Thomas Mann following the murder of the dictatorial manipulator in “Mario and the Magician,” his psychological short-story study of Italy in the early days of Mussolini. “Yes, but a liberating end nonetheless,” he concludes. In this sense Fioroni liberates Turandot and Calaf and the people whom they will now lead from darkness into light.
This is a *Turandot* obviously to be taken seriously.
Wes Blomster