Indeed, when in “Don Quixote” the knight’s books are burned, a priest spots the volume and calls it “a treasure of enjoyment and a gold mine of recreation.”
That very quality placed the tale of the White Knight’s crusade against the Turks threatening Constantinople at the center of a constellation that made it the central event of the 2008 International Cervantino Festival in Mexico‘s historic Guanajuato. The 36th festival season subtitled — not coincidentally -“CataluÒa in Cervantino.
The dramatic appeal of Martorell’s medieval novel was spotted by Calixto Bieito, the Catalan theater genius who has become the *enfant terrible* of European opera in recent seasons. Since Bieito’s impact has not yet been felt in the States, a sample of European critical reaction indicates just how radical a presence he is on a scene that has for years seemingly known no extreme.
“It’s one thing to set Macbeth in a mall from hell, with the secretaries drinking from that famous devilish cup, a Starbucks Grande,” a reviewer for Opera Chic writes. “And yeah, a nutty ‘Don Giovanni’ with Leporello in a red + blue azulgrana soccer jersey (for Calixto’s beloved Barcelona) & Don Ottavio in a Superman costume, OK, it’s a *dramma giocoso* so we’ll pretend it’s more giocoso than dramma anyway, and DaPonte was one horny bastard so the naughtier the better — maybe.
“Insane as he may look, Calixto has been blessed (by Satan, clearly) with an uncanny sense of dramatic tempi, and a great eye, and a quick mind.” Yes, like him or not, Bieito is here and he’s not going away. And he is a genius and his work fascinates, as was clear from the enthusiastic reaction to “Tirant” at the Cervantino.
In 2007 Bieito, relying on the immense talent of his Barcelona Companyia Teatre Romea turned the novel into an orgiastic three-hour music-theater spectacle, first seen in conjunction with Germany’s Frankfurt Book Fair in 2007. In October at the Cervantino Beito mounted the production on a runway that extended far beyond the stage of Guanajuato’s cavernous Auditorio del Estado. 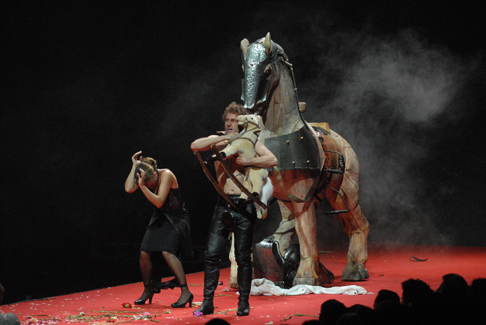 Bieito’s account of the White Knight’s heroic and amorous adventures makes the “Satyricon” look like Little Orphan Annie. It’s an exercise in excess that mixes Fellini and Pasolini, Wagner and Madonna in a raucous romp through nudity and nonsense, through seduction and seriousness.
“‘Tirant’ may be the greatest book ever written,” said Cervantino general director Gerardo Kleinburg. And Bieito has shown us another way of reading a classic. “The staging is rich in issues extremely sensitive today. It is totally non-conventional and somewhat risky, but that makes it healthy for the festival.” “It underscores the social relevance of art, which is essential to the mission of the festival.”
Bieito has made “Tirant” a panorama of a society torn by contradictions, obsessed with splendor and devoured by depravity and decadence. The contemporary relevance of the production was overwhelming. The musical score — performed partly on tape, but largely by an on-stage organist, is by Charles Santos and Bieito himself. It offers a hint of Michael Nyman, Orff and Messiaen.
Performed for an audience seated on stage on either side of the runway, the three Cervantino performances featured almost the entire 2007 original cast, an ensemble distinguished both as actors and singers headed by stellar — and handsome — Joan Negrie’. One reservation: True, the world is still peopled by prudes; nonetheless — well over a century after the Victorian age — a certain advance has been made in popular perceptions of human sexuality.
In “Tirant” it was almost a given that any character who appeared would be stripped to the skin within minutes, and one poor fellow played a great part of the three hours in the buff. It gets a trifle sophomoric after an hour or so. And, in addition, there’s a practical problem. “Tirant” was amplified throughout, and there’s no obvious solution regarding the placement of a body mike on a person wearing Jockey’s — or less.
“Catalonia is a region with a very strong cultural identity,” said Cervantino general director Gerardo Kleinburg regarding the theme of the ‘08 season. “The region is rich in incredible modern artists in all fields.”
He stressed further a strong feeling of kinship between Mexico and Catalonia, due to the thousands who fled to Mexico from that region between 1936 and 1939. “New generations have grown up here,” said Kleinburg, for a decade director of Mexico’s National Opera. “They strengthen the feeling that we are part of the Iberian peninsula.”

An opera in the intimate opulence of Guanajuato’s 1908 Teatro Ju·rez recalls scenes from long-ago films in which the aristocracy indulged itself in the arts. It’s an experience beyond the every day, and Cervantino made it special with a co-production with Mexico’s National Opera of “Manon Lescaut” that honored Puccini on his 150th birthday. 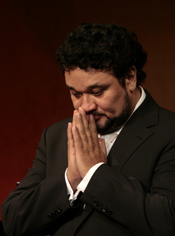 The all Latin cast was headed by Chile’s VerÛnica Villarroel in the title role. Although too mature today to be convincing as the virginal, cloister-bound Manon of Act One, Villarroel is a formidable singing actress who was impressive and convincing in the remaining three acts of the work. Brasilian Richard Bauer as Des Grieux and Jesus Suaste as Brother Lescaut completed the cast.
Hero of the emotionally intense production, however, was veteran Italian conductor Guido Maria Guida, who brought rarely heard emotional intensity to Puccini’s score. Earlier in the day — October 12 — Guida conducted an expanded Sinfonietta Ventus, a Mexican chamber ensemble of international stature, in the gilded splendor of Guanajuato’s Templo de la Valenciana, the city’s handsome Baroque cathedral.
Guida, a key figure in the educational wing of Bayreuth’s Wagner Festival, offered a translucent reading of the “Siegfried Idyll,” follow by a spellbinding performance of Schoenberg’s early Chamber Symphony, No. l. Op. 9. The Schoenberg performance touchingly laid bare the deep Romantic roots of this first fully modern composer. Orchestra and chorus — both superb — came from the National Opera’s home bass in Mexico City.
Nothing makes a festival more festival than the return of a native son who has achieved fame beyond his country. All the joys of homecoming were felt when RamÛn Vargas came on stage in the Teatro Ju·rez on October 9, the first full day of Cervantino ‘08. Vargas, one of the world’s leading tenors for 25 years, was given a hero’s welcome, and he responded with equal warmth.
Despite his excellence in both the bel canto and Italian repertory, it was in the music of Tchaikovsky and Rachmaninoff that Vargas overwhelmed the audience in the packed theater. The emotion that he brought to “Kuda, kuda,” Lensky’s valedictory, pre-duel aria from Eugene Onegin,” touched the heart, and his work with two soul-searching Rachmaninoff songs was equally moving. Outstanding also was his accompanist of many years, Georgian-born Mzia Bakhtouridze.
The Cervantino remains the outstanding all-arts festival of Latin America. It remains — alas — yet to be discovered by Americans.
Wes Blomster