Traditional stagings of 19th-century
opera have become something of an embarrassment to a genre which is still
struggling to shake off the clichÈs which haunt its perception in
non-opera-going circles. This is in spite of there still being a keen and
thriving audience for those clichÈs; you need only look at the popularity of
the Eastern European touring outfits which, with cardboard sets and cardboard
acting, keep the standard repertoire alive in provincial theatres around the
UK.

Jo Davies’ production of AÔda for ENO and Houston, which was
first seen here in London a year ago, is not made of cardboard (though
sometimes it looks as if it is made out of gift-wrap). Nor is it lacking in
visual imagination, with its wacky turquoise and gold designs by Zandra
Rhodes. Still, it ticks enough unfashionable boxes to guarantee divided
opinions from opera aficionados and the theatrical establishment. Static
direction – check; “spectacular” sets and effects –
check; appeal to the masses – check. Remind me – why exactly is
that last point a bad thing?

With last year’s cast returning almost wholesale, the revival was a known
quantity, though a non-specific announcement was made at the start to excuse
the possibility that several of the principals might not be at full strength
having been unwell earlier in the week. Further investigation yielded the
fact that this included both female leads, though here on the first night
there was little to fault their performances. In the title role, Claire
Rutter’s bright-toned soprano soared above the large ensembles but also made
beautifully delicate work of ‘O patria mia’, and although Jane Dutton’s
all-guns-blazing dramatic delivery often came at the expense of tonal beauty,
her Amneris was always a force to be reckoned with.

Perhaps the most impressive singing of all came from Iain Paterson as
Amonasro; his lovely legato and depth of emotional expression made me long to
hear him in other Verdi ‘father’ roles.

The strength in John Hudson’s RadamËs seemed to lie in different areas
this time around – the big moments at the end of Acts 1 and 3 were
thrilling, but his attempt at the diminuendo at the end of ‘Celeste AÔda’
didn’t come as easily. Matthew Best, the only major newcomer to the
production, was a verbally incisive and vocally authoritative Ramfis. Only
the Pharaoh, Gwynne Howell, celebrating the 40th anniversary of his company
dÈbut, sounded threadbare and tired, though he remains a major asset to the
cast thanks to his delivery of the words. 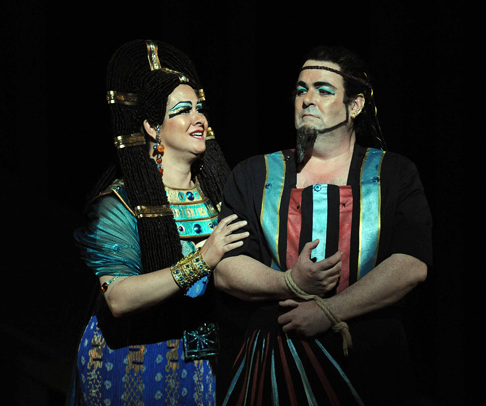 Ah yes, the words. Unfortunately, Edmund Tracey’s translation sounds
dated, with ungainly vocabulary and some truly cringe-worthy rhymes (‘Death,
o King, to the savage invaders/Close your hearts when they try to persuade
us’) and often presents the singers with tricky or ugly vowels on difficult
notes. It didn’t help that two days after opening night, I heard a concert
performance in Italian of the same opera, which only served to underline how
much better the original Italian text works with the musical line. Verdi and
his 19th-century compatriots are particularly hard to render in English; I
don’t think I’ve ever heard a truly successful English singing version of any
Verdi opera, whereas Handel, Mozart, Puccini and Jan·ček can all be
perfectly convincing given the services of a skilled word-setter. The
shortcomings of some of the translations have become increasingly evident
since ENO introduced surtitles.

The conductor, GÈrard Korsten, who is new to the production, favoured slow
tempi which lent an air of stateliness and grandeur to some of the large
public scenes, but which made parts of the solo arias rather sluggish. The
on-stage trumpets were out of time, too – I hope this will be sorted
out before the next performance. 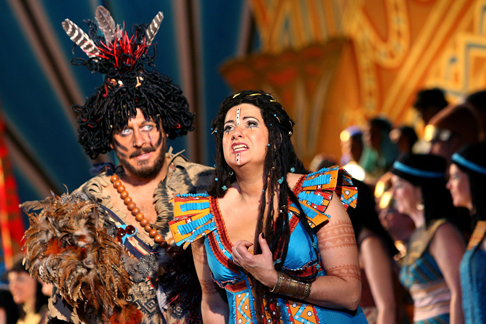 Sometimes the staging’s superficiality is a little overpowering, and it is
frustrating that only AÔda herself consistently exceeds two dimensions. Only
in the Nile Scene, and the great sequence for Amneris which follows, do we
really start to see what motivates the principal characters. Though this is
partly a result of the way the piece is structured, with its grand public
scenes dwarfing the protagonists’ personal struggles, it’s the director’s job
to give them real definition. Even so, this remains an eminently sensible
production of an operatic classic.