Despite his extensive experience, this is Mark Elder’s first
Elektra. He was adamant that the characterization should reflect the
music. Elektra’s part is surprisingly tender at times. Twisted by fate,
she’s become wild, but beneath the madness still lurks the real woman
Elektra might have been. This makes her tragedy all the more poignant. The
real drama here doesn’t lie in decibels. Orchestrally, this was superb.
Elder understands the inner dynamic of the music, grasping the fine detail
sometimes lost in the vast sweep. Harsh, dry percussion punctuates the
beating of the maids. They, too, are victims of the brutal regime. The fifth
maid, who protests, is destroyed, as Elektra will be. The playing was so well
judged that this would have made a superb recording, even without the
visuals.

Yet what visuals ! A monstrous Bauhaus monolith is set at an awkward angle
against a Greek temple. These architectural fault lines remind us that
Elektra is powerful political commentary. Klytemnestra murdered Agamemnon to
seize his kingdom, but she can’t enjoy power, her nightmares pursue
her. Elektra is duty bound to avenge her father, but she’s irrevocably
warped by it, and cannot live past retribution. As for Orestes, who will now
be king ? Neither Strauss nor von Hofmannsthal make this explicit in the
opera, but they knew, and their audiences knew, Orestes continues to be
punished by the Gods. This production was conceived at the start of the Iraq
war although it references that turning point in European history, just
before the collapse of the Austrian, German and Russian empires. If anything,
recent events like the failure of the banking system, reinforce the point
that power is an illusion, easily destroyed. Nothing’s stable : Aegisth
whirls round, dying, in a revolving door.

In this palace, family values are dysfunctional. There are disturbing
sexual undercurrents in all relationships. Perceptively, however this
production doesn’t play up the kinkiness, but places it firmly in the
context of the power crazed society around the palace. Everyone is trapped in
this brutal situation. Hence the production accentuates the importance of the
maids and subsidiary characters, expanding them as silent roles.

Susan Bullock as Elektra is outstanding. Because this interpretation makes
her sympathetic, Bullock can develop the more subtle aspects of
Elektra’s personality. She’s no screaming mad harpie. There are
many traces of the woman she might have become. She mocks the maids for
having children, yet understands why Chrysothemis wants babies. The dynamic
between Elektra and Chrysothemis (beautifully realized by Anne Schwanewilms),
is lucidly defined. “Ich kann nicht sitzen und ins Dunkel starren wie
du “, cries Chrysothemis. It helps explain why, at her moment of
triumph, Elektra deflates. She has nothing to sustain her but vengeance and
must die when she achieves it. Her final dance is slow, barely perceptible,
as if she’s sinking into the very ground, carrying the “burden of
happiness” which no longer has meaning. 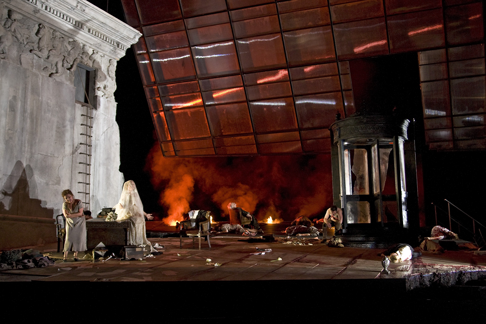 A scene from Elektra [Photo by Clive Barda]

Orestes is the finest part I’ve seen Johan Reuter play so far, and
it suits him well. So much more can be made of Klytemnestra and Aegisth than
Jane Henschel and Frank van Aken presented, but in theatrical terms this was
no real loss, as it didn’t pull focus away from the sisters and
Orestes, and the wider drama around them. Rarely does lighting merit a
mention, but this time it was exceptionally effective. Agamemnon features
prominently as a silent role, his “ghost” projected onto the
walls of his palace. When Elektra sings to Orestes of “Der milchige des
Monds”, a faint, but persistent light shines on the corrugated panoply
above her. It’s a tiny detail, easily missed, but that moment of beauty
throws the tragedy into high relief. This Elektra becomes more
profoundly moving, the more it unfolds.