One is Handel; the other, the large-scale
Russian repertoire. It has been almost six years since the company last
tackled the latter, but that revival of Khovanshchina left such an indelible
impression that a new foray into this sector of the repertoire could not have
been more eagerly awaited.

It is, to my mind, a shame that ENO chose to give Boris Godunov
in its original seven-scene version of 1869. Running slightly over two hours,
without an interval, it certainly has its merits in terms of dramatic
tautness and momentum, but it is undeniably a weaker and poorer piece than
the later versions. Most crucially, it lacks almost all the political and
religious context of the later, longer version. The missing Polish act holds
vital pieces of the jigsaw when it comes to Russia’s history with Lithuania
– it actually supplies the bedrock for the whole story. Without those
scenes, all the focus is thrown onto Boris’s private demons and the hardships
of the Russian people. It is almost an entirely different opera. 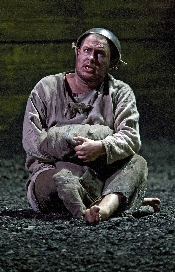 Simpleton (Robert Murray)
Tim Albery’s new production follows through the idea of stripping the
piece bare. Tobias Hoheisel’s set is simple and unusually austere; the entire
opera seems to take place in a giant wooden crate, perhaps a barn. Various
different rooms are created by platforms which slide in and out or come out
hinges. It’s a drab brownish-grey, the colour of the peasants’ costumes. When
colour is used, it is generally for effect; against this muted background,
the rich patterns of Boris’s coronation robe are as garish as the clanging
bells up in the Balcony. Grigory’s red hair instantly marks him out as a
figure of interest. The Innkeeper (Yvonne Howard) is vividly attired too, and
her mobile bar is a colourful affair – a welcome break for travellers
from the surrounding dreariness. Together with costume designer Brigitte
Reiffenstuel, Albery has done his best to make the action timeless by
combining costume designs from different periods. The peasants’ attire is
generically 20th-century, while Boris’s coronation seems to take place
centuries earlier; other costumes fall somewhere in between.

Peter Rose played Boris as a man whose occupation of the throne is as
uneasy as he feared it would be. There was a warmth to his portrayal which
made Boris likeable; the mad scene was never really gripping or hair-raising,
but was full of pathos. Vocally, he held his own, with a sharper focus than I
have heard in the past, though his expressive range is limited. 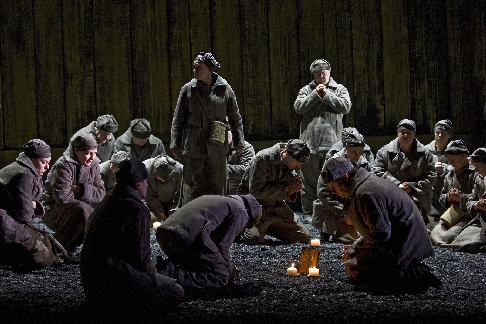 The staging makes much of the Simpleton; curled up in one corner of the
stage during the final scene, he witnesses Boris’s breakdown and eventually
leads the dying Tsar off into the beyond. Robert Murray’s clear, lovely tenor
was ideal, imbued with innocence and pathos.

The American tenor, Gregory Turay, was a handsome and secure-voiced
Grigory, while John Graham-Hall was a wraith-like Shuisky, the pointed
precision of his diction making him all the more sinister. Brindley
Sherratt’s Pimen was outstanding.

Although this version of the piece barely gives either of Boris’s children
an opportunity to make their mark, Sophie Bevan was an attractive and lyrical
Xenia, and Anna Grevelius a confident Fyodor. (Xenia’s second costume –
the most striking of the whole production wardrobe – was worn for a
ten-second dash across the stage, and again for the curtain call. What a
waste!) Jonathan Veira was a characterful Varlaam. 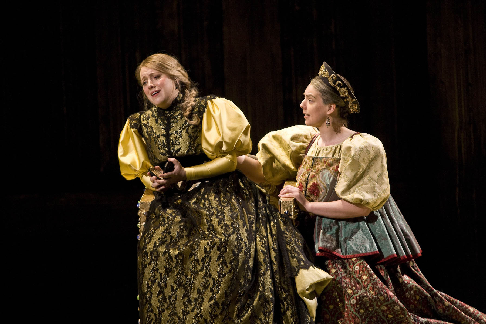 The opening scene did not show the (greatly augmented) chorus in their
best light, with the ladies especially sounding shrill and vibrato-laden
– but they rose to the challenge as the evening went on. The orchestra
was magnificent under the baton of ENO’s Music Director Edward Gardner, with
muscular sound, sensitive phrasing, and particularly fine playing from the
woodwind section. Now can we have the rest of the opera, please?