With it, he opened the gates through which the monumental programmatic scores of
the 19th century would soon flood the musical scene. In 1862- Berlioz wrapped up his career
with the opéra comique Beatrice and Benedict, a brief and understated score of such grace and
delicacy that the composer saw it as one of his loveliest and most original works — indeed, “as a
caprice written with the point of a needle.”

The Houston Grand Opera, founded in 1955, kicked off its 2008 season with the work, for which
Berlioz extracted the libretto from Shakespeare’s Much Ado About Nothing. In its first staging of
any Berlioz work, the HGO made the Australian Opera production a delight, further underscoring
the high quality that Anthony Freud in his second full year as its general director, insists upon
with this company.

Australia apparently offers escape from the excesses of European Regieoper, for this production,
the work of Elijah Moshinsky, recreated for Houston by Robin Tebbutt, is simple and
straightforward and set realistically in the middle of Berlioz’ own 19th century. It is beautiful and
enchanting. Michael Yeargan’s single outdoors set, rich in autumnal hues, is magically lighted by
Howard Harrison, whose twilight is of a perfection that outdoes Nature herself, and the very full
moon that rises through an arched entrance is astonishingly unhackneyed. It’s a fine touch that
Moshinsky has the happy ending of the opera — a huge double wedding — caught by a period
photographer. The curtain falls as his light flashes.

The performance heard on November 2, was as impressive vocally as it was visually. Joyce
DiDonato and Norman Reinhardt sang the spunky title figures, two young people, proud and
individually minded, fighting the fact that they are madly in love with each other. In DiDonato,
now an international star, one experiences magnificent growth with each encounter; it is hardly
surprising that she walks a path already strewn with awards. And Reinhardt, tall, handsome and
virile of voice, is a perfect partner for her.

It is, however, Ireland’s Ailish Tynan who almost steals the show as Hero, the gentle and
steadfast female of the story’s second couple. Tynan, celebrated both in Europe and the US as
Susanna, Papagena and Zerlina, is a petite woman who sings with shimmering ease. And one
wished that Berlioz had provided her partner Claudio, baritone Lian Bronner, with more to sing. 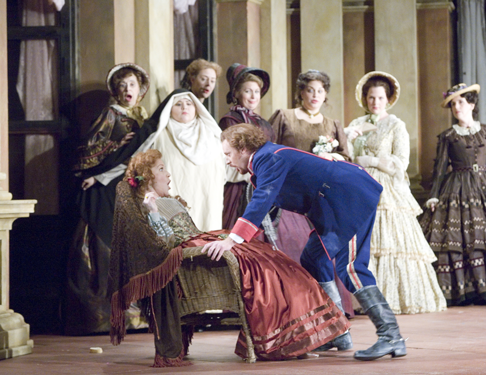 Yet a third female brought splendor to the cast: Leann Sandel-Pantaleo, who was stellar as
Hero’s lady-in-waiting Ursule. Hers is a voice of such melting gentleness that it is difficult to
imagine that Amneris and Siegrune are among her signature roles. The duet with which Tynan
and Sandel-Pantaleo concluded Act One, was a masterpiece of refined singing.

Indeed, so overwhelming were the three sopranos in the HGO cast that one wondered whether
Strauss might have taken cues from Berlioz in composing Rosenkavalier. Rarely does one hear
female voices so touchingly combined. The cast further documented the excellent training
offered by the HGO studio, for DiDonato, Reinhardt and Bronner are all alumni of the program.

True to the conventions of opéra comique, Berlioz included a good bit of spoken dialogue in his
libretto and — concerned about its delivery — instructed singers at the Baden-Baden premiere to
“speak like human beings,” and that is exactly what this cast did, allowing speech and music to
flow easily into each other. 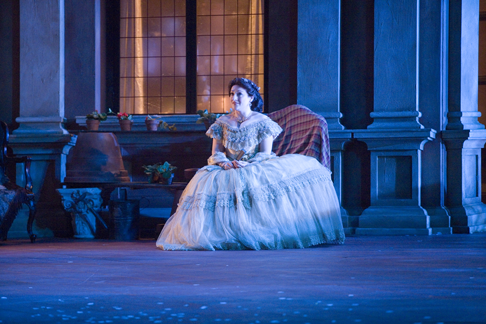 An unfortunate exception was veteran actor Donald Maxwell as alcoholic choirmaster Somarone,
a role that is largely ad-libbed. Although a great hit with the audience, Maxwell sadly overplayed
his hand, speaking further in an overblown British that conflicted sadly with the American
English of the remaining cast.

Young German conductor Michael Hofstetter, now maestro of the Stuttgart Chamber Orchestra,
showed his understanding of the unique and transparent reserve of this score, while bringing to
the surface the melancholy undercurrent of the work. Richard Bado did his usually exemplary
work with the HGO chorus.

The HGO performed the musical portion of Beatrice and Benedict in Geoffrey Dunn’s English
translation, while Moshinsky, rather than translating Berlioz’ spoken text into English, went
directly to Shakespeare for much of that dialogue. It was a fine touch that elevated the stature of
the work. Despite its many merits Beatrice and Benedict is an uneven score, which makes the
well-rounded coherence of the HGO staging even more admirable.