Each of the four principals in this
production demonstrates a strong sense of character portrayal and interpersonal emotional
involvement in both singing and acting. The talents of this cast are essential to the success of the
music and drama, since the solo and duet pieces are interwoven by Bizet to highlight individuals
interacting with each other or with the chorus throughout the opera. The work is set in ancient
Ceylon with Lyric Opera’s staging showing a mixture of images from Eastern religions. The
virgin priestess Leïla, who pays a ceremonial visit of several days to the region of the pearl
fishers, is sung by soprano Nicole Cabell. The long-standing friendship of two members of this
community will be tested again during the course of the action. As the friends with a variable
past, marked by loyalty as well as jealousy, Nadir and Zurga are sung, respectively, by tenor Eric
Cutler and baritone Nathan Gunn. Finally, the spiritual leader of this society, identified as the
high priest of Brahma, is sung by the bass baritone Christian Van Horn. The Lyric Opera
Orchestra is conducted by John Mauceri. 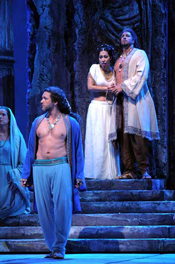 From the start of the first act, the tensions that will mark a constant shift between peaceful
friendship and rivalry in love are established already in the opening music and staging. A scrim
covering the stage during the overture suggests a placid tropical setting whereas the initial music,
as emphasized skillfully under Mauceri’s direction, contains a multi-layered projection of
forthcoming oppositions. As the assembled fishers are reminded by Zurga, they are obligated to
choose a new leader. Nathan Gunn, in the role of Zurga, urges the reveling dancers with his
supple and convincing vocal lines, just as he accepts their decision to make him their king with a
lyrical expression of dignity. Immediately after this choice is settled, the figure of Nadir
reappears following a long absence from the fishermen in search of adventure “des savanes et des
forêts” (“in savannas and forests”). The role of Nadir is ideally suited to the musical sensibilities
of Eric Cutler. From the first notes of his entrance, Cutler’s voice soared in Nadir’s emotional
scene of recognition: the challenging upper range of the part was sung consistently on pitch and
without a hint of strain. More importantly, the voice communicated at once an exciting narrative
of a wandering and curious spirit. Once Nadir is welcomed back into the society of pearl fishers,
he finds himself alone with his former friend. As they reminisce on the priestess whom they had
both seen years before in a temple at Candi, the emotions of rival attraction vs. renunciation for
the sake of friendship are poured into the justly famous duet for tenor and baritone. In both
declamation and poetic singing the voices of Cutler and Gunn melded yet remained distinct in
exquisite lyrical effect. As Cutler pronounced “Voyez” (“Look”), one sensed that he truly could
see the priestess still in his mind’s eye. Gunn’s evocation “O vision, o rêve” (“Oh vision, oh
dream”) was equally effective as memory through song. After concluding the duet with the
mutual assurance of sacred friendship, the announcement of a vessel landing at shore introduces
the remaining two principal figures. In a ceremonial procession the unnamed virgin, whose
identity must be concealed by a veil, is led into the community under the protection of Nourabad
the high priest. Her duties and the promise she must swear are detailed by Zurga as newly
chosen leader. Here the impressive effect of Gunn’s seamless lyrical line was paired with the
rapt attention of the assembled chorus of fishers. Leïla the veiled priestess recognizes Nadir; by
the same token, Nadir is reminded of his past love, when he hears now the voice of the veiled
woman assenting to the conditions of chaste anonymity. The priestess is led into the temple by
Nourabad, the community disperses, and Zurga leaves his friend to conclude the day in solitary
reflection. The second most familiar number of the opera occurs at this point in the score. Nadir
has been greatly moved by the reminder of a voice so similar to that of his beloved Leïla. He
recalls the vision of the woman from the past in his “Je crois entendre encore” (“I believe I still
hear”), an aria in which Cutler demonstrates not only scrupulous legato and attention to text but
also high notes imbued with feeling and sung with a remarkable piano effect. His intonation of
the line “O souvenir charmante” (“Oh charming souvenir”) remains in one’s memory long
afterward. As Nadir falls asleep, Nourabad returns with the priestess and gives instruction for
her continued prayers on an exposed rock. In the concluding scene of the first act, Leïla begins
her prayer to the god, “O Dieu Brahma,” and continues, urged on by the alternating voice of the
chorus, with her lines “Esprits de l’air” (“Spirits of the air”) and “Dans le ciel sans voile” (“In the
cloudless sky”). In the role of the priestess Nicole Cabell sings with beauty of tone and
flexibility, her range secure in all the scales and coloratura required at this point of the score.
One senses her creation of a character with voice, since she remains stationary at first during her
prayer. As Nadir awakens and hears again the once familiar voice, he moves toward the base of
the rock. Leïla reveals her identity by lifting momentarily the veil: the mutual recognition —
and Nadir’s fervent request — prompts Leïla to continue her song. Here Cabell’s performance
excels in varying and decorating the repeated lines, her effortless coloratura including several
skillfully executed trills. Before the final chords of the orchestra in the act the listener senses, in
this performance, that both characters have been able to use their voices to sing of and to
communicate their feelings for the other, yet they must still maintain distance because of oaths
sworn by each to Zurga. 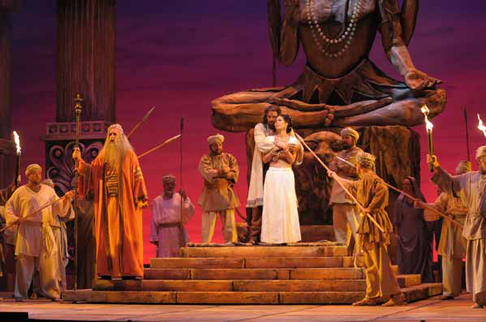 In the second, shorter act of The Pearl Fishers the anticipation and tension established already
from the first act develops into both reunion and crisis for the lovers. The priest Nourabad leads
Leïla to her shelter for nightly rest. Christian Van Horn sings imposingly and is able to inject a
truly credible spirit of authority into his rich and flexible bass baritone. He warns Leïla to remain
faithful to her vow and to eschew the temptation of earthly love. When she is alone, Leïla senses
that Nadir must be in the immediate area, and she begins her cavatina “Comme autrefois” (“As in
the past”). In this piece Cabell exhibits ravishing lyrical control as she combines memories of
the past with hints of an imminent reunion. Her song is answered from outside the temple by
Nadir so that music serves fittingly as their reintroduction to physical contact. Once they
embrace, their duet is a confession of love and loyalty as well as a realization of the conflicts that
will follow on their renewed bond. Both Cabell and Cutler give full expression to the complexity
of emotion and commitment awaiting them. As a storm begins at the shore, Nourabad enters and
sees that a man has defiled the temple by his presence. He sends for guards who capture the
fleeing Nadir. Upon Leïla’s surrender in the temple, the fishers return and demand that both
lovers be killed. This final scene introduces the dramatic conflicts of the following act once
Zurga enters and attempts to mediate. He counsels leniency, which the crowd is prepared to
accept until the identity of the priestess is revealed. Zurga’s mood shifts rapidly to rage as he
sees that Nadir and Leïla have broken their separate oaths sworn to him.

The final act of the opera is neatly divided into two scenes. At the opening Zurga remains alone
in his tent, where he is torn by guilt. Now that his fury has subsided, he regrets that Nadir, his
cherished friend, must die at sunrise. In this scene Nathan Gunn sings the aria “Nadir, ami de
mon jeune âge” (“Nadir, friend of my youth”) as a dramatically wrenching showpiece. Although
the aria is not as interesting musically as other parts of Bizet’s score, Gunn performs it as a
telling moment for the character of Zurga. Leïla now enters the tent to ask that he pardon Nadir,
yet the rage of Zurga returns when he realizes that she still loves his rival. The exchange here
between Cabell and Gunn becomes one of the dramatic highlights of the performance. She
leaves the text prepared to die and deposits with a guard a necklace that she has worn since her
youth. Zurga recognizes the necklace as one that he had given to a child who had saved his life
by hiding him years before. In the final scene Nadir is surrounded by fishers, who prepare for the
execution. Leïla is brought in to join him in death, as both sing of their happiness in remaining
together. When Zurga declares that fire has broken out in the camp of the fishers, the latter rush
off to save their families. Zurga announces to Nadir and Leïla that he himself has started the
blaze: he frees the lovers and urges them to escape, returning the generosity that he had
experienced from Leïla long before. Although he will surely pay in sacrifice for this act, Zurga
has redeemed his friendship.

This production of The Pearl Fishers by Lyric Opera is a revival of the original design and
staging from the 1997-98 season. Both sets and costumes have been redesigned under the
direction of Scott Marr. This production argues convincingly for more frequent revivals of
Bizet’s early opera, with the cast and direction of these performances serving as a model for
future productions as well.