Our worst fears came true at the opening of L’elisir d’amore when
the curtain rose to reveal a bandstand right out of a Kansas farm town sitting center stage,
instilling the dread that it was going to sit there all night. It did.

The joke was on us. The singers, looking like they were stepping out of a retro production of
Oklahoma, were absolutely dripping with the credits that comfort all opera snobs. In fact you
asked yourself how all this high operatic horsepower could find itself in the middle of
Republican, mid-western America. But a Mexican tenor, an Albanian soprano, two Italian buffos,
even a Korean soubrette stepped right out onto that bandstand and made Oklahoma or Nebraska
their own. 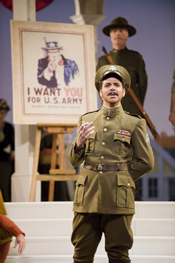 Giorgio Caoduro (Belcore)
It was a perfect fit. This edition of Donizetti’s one hundred seventy five year old opera about
rustics in Northern Spain had all the trappings of pre-World War I rural America as envisioned
by American stage director Jim Robinson. What we saw was was not the Midwest as illustrated
by this scenery for earlier versions of the Robinson production, but a special San Francisco
version. In fact it was “Harvest Day” celebration in Napa Valley. Albanian soprano Inva Mula
was “Crush Queen,” and we were quickly swept into the wine country flow.

The Elixir of Love (as it was named in San Francisco even though it was sung in Italian and
should have been called L’elisir d’amore) is a perfectly constructed little “numbers” opera. The
plot is carefully made so that the succession of arias, duets and trios is foremost an opportunity
for singers to show their stuff and then coincidentally a means by which to move this nineteenth
century sentimental opera buffa story along. All this happened with the utmost ease, the grace of
bel canto echoed in the grace by which sight gag after sight gag flowed throughout the evening,
footballs sailing in great arches across the back of the stage during the first act finale.

Life was good in those old days, pleasures were simple — apple pies, layer cakes and ice cream
sundaes. Bel canto is a downright delicious confection too, so all this went into the same pot.
Nemorino and Adina were as interested in ice cream as they were in each other, Belcore
devoured an entire apple pie, Dr. Dulcamara picked at leftover tidbits of fried chicken and potato
salad from the potluck. And through all of this gourmandaise, Italian conductor Bruno
Campanella, another star of bel canto, never missed a beat, keeping the singers in musical rapture
from the first note to the last. 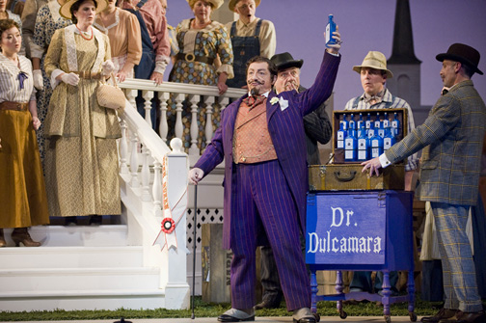 These were the really old days when even simple country folk could afford (almost) a Napa
cabernet. Nemorino, Mexican tenor Ramón Vargas, downed his two bottles and never faltered
from consummate Italian tenorial schooling, even while dancing the two step, a tango or the
doing the Lindy. Not to mention the consummate charm he exuded while catching a flying piece
of apple in his open mouth.

Soprano Inva Mula is no shrinking violet. With her girlish figure and full scale vocalism she
easily took center stage as the town diva, relentlessly teasing Nemorino while being swept off her
feet (literally) by the irresistible Belcore. The pleasures she brought to the bandstand were as
much her fine, rich, very stylish singing as was her warm, natural presence. This Adina was never
coy, she was always intensely vocal as a bel canto diva should be.

The role of the lady killer Sargent Belcore was an easy fit for young Italian baritone Giorgio
Caoduro, his swagger a natural one, his fluid baritone breaking into Donizetti’s giddy coloratura
with utmost ease, communicating an inborn sense of fun, a strong dedication to Italianate high
style, and a go-for-broke physicality when he ended up tackled under a pile of his recruits (the
high-school football team) or doubled over, punched in the nuts by Nemorino.

Too often San Francisco Opera’s Adler Fellows are thrown into important roles before they are
mature enough to take them on. Not so the Gianetta of Ji Young Yang. Here is a charming,
finished singer who will soon be an Adina in her own right. 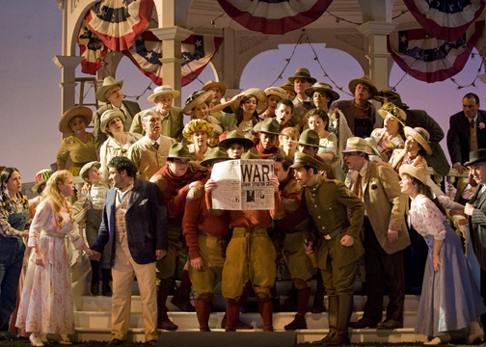 A scene from Act II

The purple suited shyster Dr. Dulcamara, bass-baritone Alessandro Corbelli, exploited his native
Italian to the fullest, every syllable flying across the pit into the house, making his Italian so
understandable that it seemed to pass for real American. The lively, inventive San Francisco
Opera Chorus that eagerly lined up to buy the elixir seemed as delighted and gullible as was the
audience, clearly eating up every nuance of bel canto and Americana. And finally it dawned on
Dr. Dulcamara, as Robert Mondavi was just then learning and we all now know, that he had the
best elixir around — a Napa cabernet.

It is all to rare that productions by American directors find there way onto major American
stages. James Robinson gave San Francisco audiences enjoyment that was specifically American,
designer Allen Moyer provided brilliant, minimalist scenery with subtle detail that was as
delicious as Donizetti’s coloratura. Yet another American, costume designer Martin Pakledinaz,
though no stranger to big-time international opera, gave us costumes worthy of Broadway.
Central to the success of this fine production were the supertitles written by Jerry Sherk and
Francesca Zambello.