Musically
and structurally, it is unusual; not only does the first act last over two
hours, with a full forty-five minutes before either of the major principals
put in an appearance, but there’s barely a solo aria in the piece; the score
consists almost entirely of duets and ensembles. At Covent Garden over a
decade later, the prospect of such an opera (mounted as a star vehicle for
FlÛrez) was enough to provoke a certain amount of trepidation despite the
house being sold out months in advance.

But the opera’s principal message is a familiar one: no man stands a
chance when pitted against a talented and resourceful woman. It’s an idea
reminiscent of two of the composer’s better-known operas, L’italiana in
Algeri and Il barbiere di Siviglia, and Matilde drives
the point home so unequivocally that rather than feeling formulaic it comes
across at times as a Rossinian self-parody. The characters are
two-dimensional and limited in range, especially FlÛrez’s character, the
tyrannical Corradino whose motiveless misogyny is such that he barricades
himself away from the world to avoid having to deal with women, but who melts
like a lovesick puppy the second he’s confronted by the feisty Matilde.
There’s plenty of catty business between Matilde and the Contessa d’Arco (the
noblewoman with her own legitimate claim on Corradino), pathos from
Corradino’s young prisoner Edoardo and the father who is searching for him,
and a convenient ending made possible by the verbal cunning of an omnipresent
itinerant poet called Isidoro.

As Matilde comprehensively conquers the war-hungry Corradino, so the young
Polish soprano, Aleksandra Kurzak, upstaged the mega-star tenor whose
availability was responsible for the opera’s rescue from obscurity. Kurzak
brought an air of confident modernity to Rossini’s heroine, with a pert,
confident stage presence and pinpoint accuracy in the fiendish coloratura
which she delivered with a crystalline tone. The flexibility in FlÛrez’s
upper register was as show-stopping as ever, but the small size of his voice
was shown up by the strength of the female leads (not just Kurzak, but
Enkelejda Shkosa as a fiery Contessa d’Arco) and he sounded a little dry at
times. His music just doesn’t have the same potential as the women’s; he’s
not even destined to be the voice that stays in the memory at the end of the
night, as Matilde concludes with a triumphant rondo a show in which Corradino
has had no real solo at all. 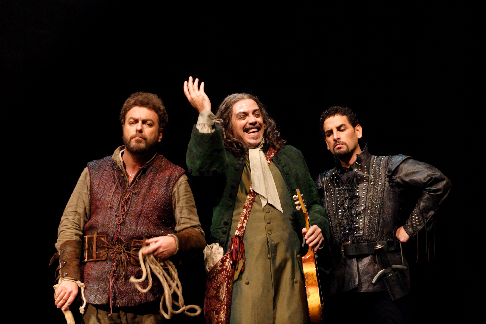 In the trouser-role of Edoardo, Vesselina Kasarova was disappointing, her
top register sounding disjointed from the rest of her voice, though it’s
always a warm sound, and the reunion with father Raimondo (Mark Beesley) was
very affecting – a serious sub-plot in an opera which is otherwise a
sharp comedy. Alfonso Antoniozzi was endearing as the poet Isidoro, and those
in the minor roles all contributed to a surprisingly well-integrated ensemble
performance considering the opera’s hybrid pedigree.

Mario Martone’s production was constrained by Sergio Tramonti’s austere
set design, consisting of two enormous concentric spiral staircases snaking
up into the flies, and a ramp leading up to an aperture at the back. Though
it gave three dimensions to the movement on stage, it was excessively
limiting, not to mention colourless. It was left to the principal singers to
maintain interest throughout a long evening, a feat which they more than
achieved with snappy assistance from Carlo Rizzi in the pit. But really
– with this classy a vocal cast – it would have worked just as
well as a concert.