So Carmen
and Rusalka seemed an ambitious prospect for this year’s Autumn slot, without
any apparent increase in resources.

One of the two, Rusalka – Dvorak’s retelling of the Undine fable
dealing with loss of innocence and the impossibility of survival in an alien
world – reached the stage almost intact. The original orchestration is
of Wagnerian proportions, and inevitably a 13-piece reduction (created for
the Iford Festival by Ian Farrington) cannot create a sound-world of anything
approaching the same depth, but there were few actual cuts, and the small
orchestra under conductor Alex Ingram did its best to sound sumptuous and
shimmering.

Director James Conway has chosen to present the opposite worlds of the
water-dwellers and the humans through the medium of a real-life cultural
divide – the American colonisation of Haiti in 1915. The casting
reflected this, with black singers as the Water Sprite and nymphs, and white
singers in the human roles. The only exception was the white Jezibaba,
ostensibly a survivor of Haiti’s indigenous Taino race – though I
confess I wondered if this angle might have been dreamt up because ETO
couldn’t think of a black mezzo to cast in the role.

The general concept, though, was ingenious, successfully conveying a
culture of unwitting ignorance and an irreconcilable chasm of difference
between peoples, each ‘side’ unconsciously incapable of viewing the other as
equal.

In the title role, Donna Bateman lacked legato occasionally, but her
performance was full-voiced, passionate and involving, a very physical
portrayal of a would-be free spirit who feels trapped and unfulfilled in her
own world, but who finds that every step she takes only leads her to a new
prison. As the Prince, Richard Roberts had ardour, good looks and a lyrical,
evenly-produced tenor, while Fiona Kimm’s Jezibaba was a tour de force.

Keel Watson was a characterful Water Sprite, his full bass caressing the
melancholy falling phrases. The trio of nymphs – Angela Caesar, Abigail
Kelly and Alison Crookendale – were mellifluously pleasing to the ear
when singing together, with Caesar’s light and attractive soprano a
particular solo highlight. The Gamekeeper (Maciek O’Shea) and Turnspit
(Jessica Summers) were lively and engaging in their second-act cameo, while
as the Foreign Princess, Camilla Roberts was vocally powerful, full of
hauteur and chillingly unpleasant in her snide insults towards Rusalka. 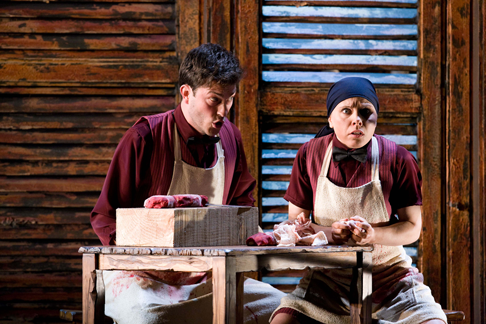 The staging and lighting were very simple, with minimal set and a backdrop
consisting of a giant corrugated moon. 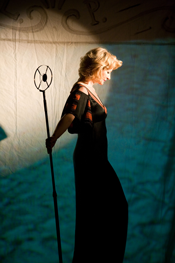 Leah Marian Jones (Carmen)
Far more adventurous, though maintaining the theme of cultural contrast,
was La tragedie de Carmen, Peter Brook’s short theatrical piece
based on, but not a direct equivalent of, Bizet’s opera. In an effort to be
faithful to the spirit of MÈrimÈe, it presents the bare bones of the story in
a single act, a nightmarish sequence of flashbacks haunting the demented Don
JosÈ, who at the start has Carmen’s blood fresh on his hands.

Brook’s version was created in 1981 and is only licensed for performance
in French, which – although ETO prefers to perform as much as possible
in English – director Andrew Steggall capitalises upon, staging it as a
film noir. It all feels quintessentially French: the Carmen, Leah-Marian
Jones, with her fair colouring and feline eyes and demeanour, comes across as
a sultry French chanteuse a la Marlene Dietrich rather than a gypsy.

Marius Constant’s score, freely adapted from Bizet’s, makes imaginative
use of orchestral colouring, using percussion to particularly evocative
effect. All Carmen’s own arias survive, but she sings them as introspective
solo concert-pieces not addressed to anybody in particular, and Nicholas
Garrett is made to croon the Toreador Song in a similarly intimate and
non-operatic style. The straight ‘operatic’ numbers bloom like moments of
unexpected beauty, and are mostly reserved for Don JosÈ (David Curry) and
Micaela (SinÈad Campbell-Wallace), evoking the world of innocence from which
they originate.

La tragÈdie is a juxtaposition of this musical beauty with raw,
violent horror; in little over an hour, Don JosÈ is dragged further and
further into obsession and madness, bludgeoning Carmen’s gypsy husband with a
bull’s skull in a breathtaking piece of shadow-play. Not even Escamillo gets
out of the nightmare in one piece. 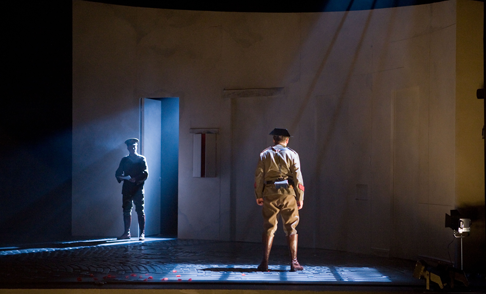 It is the kind of piece which would normally lend itself to performance in
an off-West-End studio by a cast of theatrically-trained singing actors, and
it was a luxury to hear it performed by opera singers. Moreover, it was an
extremely powerful drama.

All photos by Robert Workman courtesy of English Touring Opera