As recently as 1992 SFO still made use of an
“improved” version of this magnificent opera —
Mussorgsky’s own so-called definitive version (1872), improved in that
it provided a role for a diva, added a resplendent ball scene and included
the pretender Dimitri’s march to Moscow.

The fate of Mussorgsky’s Boris gets even more complicated
because after his death his friend Rimsky-Korsakov did him the favor of
improving his vocal lines and his orchestration, and then 50 years later
Soviet composer Shostakovitch improved the Rimsky-Korsakov version. San
Franciscans know all three musical versions, in the early years it was the
Rimsky-Korsakov, but as one of the world’s progressive companies in the
1970’s San Francisco Opera was among the first to recover
Mussorgsky’s original orchestration. The more recent 1992 staging
offered, gratefully, the fine Shostakovitch version. 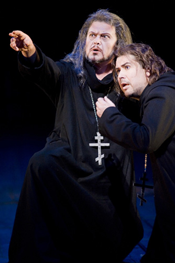 Vitalij Kowaljow (Pimen) and Vsevolod Grivnov (Grigory)
This twelfth San Francisco Opera staging of Boris Godunov is the
first time that San Franciscans will see Mussorgsky’s original seven
scenes. The profound concentration of the audience (10/30/08) made it
apparent that there was not one note too many, nor one note too few. It was a
performance of perfection, our hearts and minds focused, with Mussorgsky, on
the power, the fear and the anguish of Pushkin’s guilty czar Boris.

Never mind that modern historians do not find Boris guilty of murdering
the czarevitch Dimitri, Pushkin and Mussorgsky did, thus Boris lives in
history as a magnanimous ruler tormented by the crime that made him the ruler
of Russia. Boris is a man who is kind to his children and his people, and
brutally cruel to his enemies. Obsessed by the terrible guilt of murder, he
understands that his crime will inflict unspeakable suffering onto the
Russian people.

The program booklet attributes this production to Norwegian theater
director Stein Winge, who staged Boris at the Grand ThÈ‚tre de
GenËve in 1993. These fifteen years later any reference to his original
staging is surely coincidental, though the rudiments of his conception still
exist in the huge abstract wooden structure, a massive skateboard ramp that
is the stage, and the magnificent costumes that seem to have jumped out of
the museum paintings that commemorate this turbulent period of Russian
history. Though the production hardly reflects current operatic thought, it
is timeless in concept, the powerful image of the land and state made only of
wood and therefore as vulnerable to easy destruction as are Russia’s
forests and her wooden churches, palaces and villages.

Mussorgsky’s opera is really only a few scenes from Pushkin’s
huge play of the same name. These scenes are intoned over music, a sort of
opÈra dialoguÈe though Mussorgsky’s Boris adds the historical
social moment with huge, beseeching choruses, the wily songs of countryside
peasantry, and the landscape itself echoing in the tonal magnificence of
church bells. Its biggest moments are however its most intimate moments, the
two monologues that tell of the czarevitch’s murder, Boris’ great
soliloquy and then his death, and the moral authority of Boris’ nemesis
— an idiot — in a simple song. 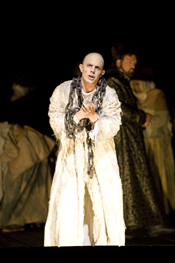 Andrew Bidlack (The simpleton)
Nothing is ever perfect, least of all this San Francisco Opera production,
but the word perfect lingers because of the many fine performances turned in.
Russian conductor Vassily Sinaisky brought Mussorgsky’s score radiantly
alive in the huge chorus scenes, and brilliantly detailed the musical colors
of the monologues, eloquently stating the ironies of Mussorgsky’s
leitmotifs.

Perhaps bass Samuel Ramey was once perfection itself as the czar Boris
Godunov. At this point in what has been a distinguished career only the shell
of a voice remains. He held himself at a strange distance from Boris, seeming
only occasionally to make contact with either the vocal line or the Boris
character. By contrast his son Fyodor was brought alive by twelve year old
Jack Gorlin, in an extraordinary performance that was vocally, musically and
histrionically that of a finished artist.

The cast is large, thus San Francisco Opera made a lot of use of its
artists-in-training program, the Adler Fellows. Soprano Ji Young Yang was
perfect as the Czar’s daughter Xenia, and tenor Matthew O’Neill
was masterful as the rogue monk Missail. The commanding stature of whip
cracking baritone Kenneth Kellogg was effective. Soprano Daveda Karanas
functioned as the Nurse to the Czar’s children. The casting of a young
artist-in-training as the Simpleton was unfortunate. Tenor Andrew Bidlack
could not contribute the complex stature needed for this role, nor does he
possess the purity of voice color appropriate to the simplicity and emotional
import of this daunting personage. 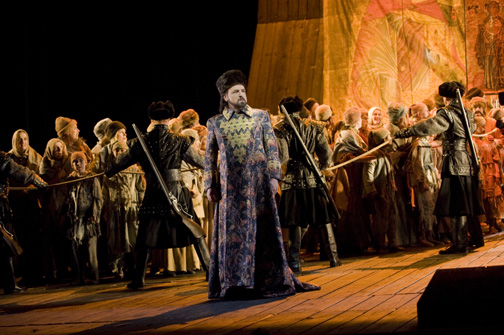 The current stage director for this widely traveled production was Julia
Pevzner who moved people on and off stage as needed, but seemed to have left
the huge cast otherwise helpless. The brilliant, now dated set for this 1993
Geneva production was designed by Sweden’s Goran Wassberg, the
sumptuous costumes the work of Norwegian designer Kari Gravklev.