Perhaps it won’t be too long before EMI decides that release belongs in their “Great Recordings of the Century” series, but for now, their Wagner duet collection under that sobriquet comes from 1957, with the legendary Hans Hotter and Birgit Nilsson. Another disc of Wagner duets out recently, from the small Oehms label, features Deborah Polaski and Johan Botha in the major scenes for *Tristan und Isolde*. Both discs feature an established veteran caught somewhat late, and a rising star in the repertoire – but with the genders reversed.
Hans Hotter had been singing Wotan and the Dutchman for a couple decades when Walter Legge decided to pair him with the up-and-coming Birgit Nilsson (although she was near 40 at the time of the sessions). Nillson also sings Senta’s solo number, as well as those of the *Tann‰user* Elisabeth, the *Lohengrin* Elsa, and Isolde’s “Liebestod” (on a bonus second disc). The brief booklet note by Mike Ashman depicts the EMI release as a by-product of Legge’s frustrated desire to record a complete Ring cycle. The last 40 minutes of *Die Walk¸re*’s act three present a Wotan of depleted but still potent authority, with Hotter’s bass at times shaky and short-breathed, yet still commanding respect. Nilsson is in fine voice, but the characterization of Br¸nnhilde would grow as her career continued. It’s intriguing to hear the great soprano hold back her power to get into the characters of Elisabeth and Elsa. However, at times, her intonation suffers a bit. The voice in full cry has more impact, and both her Senta solo scene and the duet with Hotter’s Dutchman show her off well.
The conducting of Leopold Ludwig is more serviceable than distinguished, while the Philharmonia Orchestra sounds very good. The sound has some tape hiss, easily adjusted to.
[ 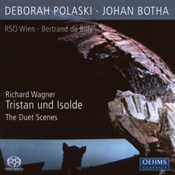 ](http://www.arkivmusic.com/classical/album.jsp?album_id=191301)Oehms offers a “super-audio” CD of *Tristan und Isolde* highlights, with very clean, crisp sound. Bertrand de Billy may not have built his reputation on Wagner, but he leads a warm, intimately scaled reading with the RSO Wien. The strongest attraction of this disc is the beautiful yet masculine performance of Johan Botha as Tristan. Here is a lover and a warrior, soaring high with total security. Botha has yet to sing the role on stage, and if he can be directed to be a livelier stage presence than he has shown himself to be in the past, he should present a formidable Tristan. Deborah Polaski, on the other hand, has sung Isolde for over two decades. On the plus side, she has developed a full-scale interpretation of a woman of barely controllable temperament, almost as fearsome in her passion as in her act one rage. On the not so plus side – the voice simply does not record well. She sounds quite a bit older than her Tristan, and the top tends to spread.
To stick to its chosen framework of “The Duet Scenes,” Oehms allows for some abrupt edits, especially at the end of the love duet. There’s no time for King Marke, either, or anything from act three. So those frustrated by the selections might want to look for another Oehms disc of Isolde’s other music, which presumably contains Polaski’s version of the Liebestod. Perhaps better yet, switch over to the Nilsson/Hotter disc for Birgit’s exalted “Mild und leise.”
Chris Mullins