Michael Volle portrays Georg Buechner’s and Alban Berg’s
character with unparalleled intensity, such a beautiful baritonal sound even
in the most harrowing moments, and such ease beneath the tortured surface,
that it is almost too good. He did everything as one could hope for in a
Wozzeck on stage, but he never elicited much pity and never seemed quite as
helpless-hapless as Wozzeck probably should. In a way, his great musical and
dramatic strengths came at the expense of the character.

Something similar could be said about Andreas Kriegenburg’s
direction – or more specifically the phenomenal lighting of Stefan
Bolliger and how it works with the continuously fascinating set of Harald B.
Thor and Andrea Schraad costumes: It is so absorbing, so good and stimulating
to look at, it might distract from the psychological development of the
characters. On Monday night, it also distracted from some so-so singing
(J¸rgen M¸ller underpowered and underwhelming as Drum Major and Clive Bayley
with an average night as the Doctor) and in doing so, it unleashed the drama
unto the audience in a visceral way that even Wozzeck-lovers might not have
expected.

Because with this would-be quibbles taken care of, the fact remains that
this was a stunning premiere, a spectacular performance, and indeed a
striking success for the Munich Opera’s second new production under the
new general director Klaus Bachler. Kriegenburg, a theater director, had done
only two operas before (which I have not seen), but here he hit a nerve in
just the right way. Instead of exerting a willful personality, ideology, or
aching modernization on Wozzeck, he gives us an internalized picture (set
roughly in the time of the play’s premiere) where the world as Wozzeck
sees it is how the audience sees it. Except for Marie and his son, the
characters are distortions of their personalities, one more disturbing than
the next. The crowds are hordes of unemployed, shadows in the world of
Wozzeck’s steadily slipping sense of reality. When the
apartment-within-the-stage begins to very subtly shift left and right, the
visualization of this losing grasp on reality becomes so perceptible,
it’s as if you could touch it. I felt like I needed a splash of cold
water or a slap in the face myself.

Speculations about his contract not being renewed are only slowly
residing, discussions about a rift between the music- and general director
are still indulged in with tabloid-like diligence by the feuilletons. But
this performance was one for a mark in his supporter’s good books.
Nagano’s strengths emerge best in modern works where clarity is part of
the musical success. 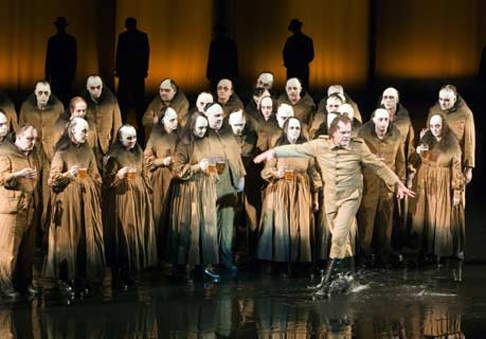 The orchestra, apparently well rehearsed, gave the music
an elastic, clear treatment; the score sounded taut and diaphanous. Only very
occasionally was the orchestra too loud; more often it was very sensitive.
When Nagano waded onto stage, barefoot and his trousers rolled up, he
received as warm a reception as I’ve heard him get in Munich. Only
Kriegenburg and his team got more – wholly absent of boos, too, perhaps
a novelty for a premiere of a modern production in Munich.

If any Wozzeck production can convince the hesitating masses to listen to
this difficult 20th century masterpiece, it would have to be this one.