My subject today is the
first of these, Donizetti’s perpetually underperformed 1833 masterpiece
Lucrezia Borgia. The next installment, to appear in a few days, will
comment on the second – Bizet’s perennial favorite, the 1875
Carmen.

Lucrezia is a fiendishly difficult work for all involved.
Spectacular settings of Renaissance Venice and Ferrara require the expensive
kind of luxury in staging – luxury without ostentation. The director
must create a sympathetic figure out of a legendary mass murderess, whose
grit Donizetti evidently admired enough to make her a soprano, a victim, a
mother, and a girl with a heart – most of the time… Meanwhile,
the lead singer has to survive the endless bel canto lines and the
head-spinning coloratura of her dramatic role written for a lyrical voice,
all the while staying “in character” – and a character that
psychologically is barely comprehensible to most of us. This was a tall
order, and the result was worth the price of admission, which at the
Washington National is always memorable in and of itself. 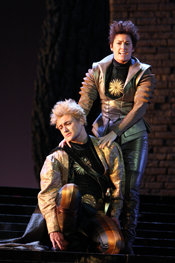 Vittorio Grigolo as Gennaro, Kate Aldrich as Maffio Orsini.
A major ingredient in the production’s success was the fact that it
was a Gesamtkunstwerk of sorts, with both stage direction and visual
design in the excellent hands of the admirable John Pascoe. The stunning
visuals, a fusion of old-world luxury with edgy and abstract modern lines,
were sophisticated yet not overbearing. Central to the design were gigantic
stone walls, first parting in welcome to the carnival atmosphere of Venice,
the endless party town, then closing ominously to lock the characters and the
audience in. Together with the fabulous lighting, a persistently excellent
WNO feature (designer Jeff Bruckerhoff), these sets enhanced the complex
psychological drama woven by Mr Pascoe the stage director. His reading of the
libretto explained (if not entirely justified) Lucrezia’s bloodthirsty
nature and reputation for promiscuity by casting her as a victim of incest
and sexual abuse – an interpretation for which there is a valid
historical precedent, as well as some veiled hints in the Donizetti score.
Just to top it off, the historical heroine’s fictional son, Gennaro, is
torn between an oedipal passion for his mother and a homoerotic one for his
best friend Orsini – it is almost hard to believe Lucrezia has
not yet joined The Tudors as a prime-time show on Cinemax!

RenÈe Fleming was billed as the star attraction of the show, and so she
was. The singer’s famously buttery voice was on full display, even in
Donizetti’s inhumane coloratura passages, which not only seemed easy,
but were – a rare treat indeed – musical. Ms Fleming’s
formidable acting skills served her best through the sections of the drama in
which Lucrezia comes across as a sympathetic victim, fighting desperately for
survival and the remaining shreds of her feminine dignity. It was harder to
appear sympathetic in her Act 3 Scene 2 entrance, clad in male warrior attire
(an unfortunate costume choice, in my opinion) and rejoicing in having just
poisoned a group of admittedly foolish but basically harmless young men. 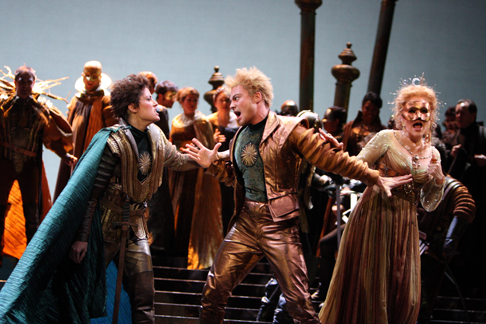 Vittorio Grigolo as Gennaro had an easier task. His character’s
sexual ambiguity is defined situationally, in relation to others throughout
the opera, while Gennaro himself essentially remains unchanged – a
young, passionate, straightforward (if not totally straight) macho warrior.
Mostly what is required to strike the right tenor here is, forgive the
obvious pun, the right tenor. Mr Grigolo is in a possession of a fantastic
one: sonorous, yet crisp and metallic, a highly appropriate timbre for
Donizetti’s character. Despite his youth, the singer was a worthy
partner to Ms Fleming. Then again, he started performing professionally at
age thirteen, and his first solo gig was at the Sistine Chapel – not
your average rÈsumÈ!

Vittorio Grigolo was not the only young singer in the cast. He was
partnered with mezzo-soprano Kate Aldrich in the travesti role of
Maffio Orsini. One of the least experienced members of the ensemble, Miss
Aldrich did an admirable job, which under normal circumstances would have
garnered her well-deserved accolades. However, she was cursed by proximity.
She simply could not quite hold her own in this all-star production and came
across, undeservedly perhaps, as only adequate. On the other hand, the
performance of the most venerable member of the line-up, the legendary
Verdian bass-baritone Ruggero Raimondi, demonstrated both the advantages and
pitfalls of experience. The 67-year-old singer appeared in a role with a
significantly lower tessitura than those he performed in his early years. The
part was shorn of most of its coloratura in an effort to accommodate the lack
of flexibility in the voice, particularly conspicuous against Ms
Fleming’s nonchalant virtuosity. Yet, unencumbered by the customary
technical fireworks, Mr Raimondi was free to unleash his impressive dramatic
talent, arguably more important than vocal prowess in the role of villainous
Duke Alfonso. It was an honor to watch the old master at work.

Another master, Raimondi’s old partner Placido Domingo, was also
involved in the production as the conductor of the performance.
Unfortunately, on that front I have few laurel wreaths to award. Just as
visual spectacle has consistently been one of the strongest elements of
WNO’s productions, the company’s orchestra is almost always the
weakest link. Donizetti’s score for Lucrezia Borgia is quite
difficult for its time and genre; it contains, for instance, an unusual
amount of brass writing, both in the pit and off-stage. Mr Domingo did a good
job as a conductor, and the orchestra sounded better than the last time I
heard it (in La traviata), but that is a very low bar to hurdle. In
comparison with the level of artistry displayed by the singers and the
director-designer in this production, the orchestral performance was barely
passable, and I wish Mr Domingo, as the artistic director as well as
conductor of the Washington National Opera could do something to improve a
situation that surely cannot satisfy him. Other than that, Lucrezia
is a world-class production, and the company is to be congratulated on its
well-deserved success.

All photos by Karin Cooper courtesy of Washington National Opera.