Meaning, if there is something you don’t fancy, wait a minute and the artistic gears will likely shift. Not that there is not a great deal to admire.
Updated to the Thirties, Paco Azorin’s exceedingly handsome set design and Franca Squarciapino’s elegant, tailored costumes provide much visual pleasure. The floor space consists of a large square platform, turned so that the downstage corner pokes just over the lip of the stage. In both of the first two acts, handsome white walls with detailed molding vie for prominence with Mylar-mirrored windows, hung with diaphanous drapes. The sleek white, rectangular low “sofas” get re-arranged to make a bed, a faux chaise lounge, etc. But while the handsome fireplace in Act II lent a homey counterpoint to the Countess’ melancholy, the odd inclusion of several ballet barres in the Act I bedroom was just plain “curious.”
Much more Mylar was on display in Act III, and the transparent qualities of these “two-way mirrors” was exploited by the exceptional lighting design from Albert Faura. Later in Act IV’s garden, these mirror panels painted with trees glided and re-grouped fluidly to provide plenty of hiding places for the conspirators. So beautiful were these tree effects it might be worth keeping them and standing up a production of *A Little Night Music*.
In spite of the quite dazzling physical production, I found the time period somewhat a defeating choice for this comedy. To be sure, the idea of the upper class exploiting servants, pursuing in-house sexual peccadillo’s, and calculating political manipulation works after a fashion in any era. But at its heart there is something decidedly unappealing about spoiled rich folks whose plight seems whiny, insignificant, and un-funny compared to a World War and the Great Depression.
That it took until halfway through Act II to generate any titter of laughter is largely the doing of stage director Lluis Pasqual, who can’t seem to settle on a playing style or a concept. Is it realistic? Commedia dell’Arte? Brechtian presentational? Noel Coward sex farce? For Mr. Pasqual, the answer is “all of the above.” What it is not with enough regularity is Mozart/da Ponte, who knew a few things about comedy timing and wrote them right into the piece, by golly. I used to think Figaro was fool-proof, but then I hadn’t yet met this director. 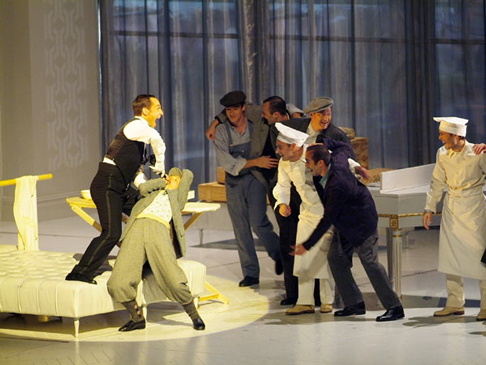 Kyle Ketelsen as Figaro (standing on the sofa) and Sophie Koch as Cherubino during “Non piu andrai”
Case in point, during a Susanna-Cherubino exchange in the first act, Figaro suddenly just walks off the platform to the darkened apron to “observe them” as an outsider. Just as abruptly, he re-joins the scene, in character. Huh? (This idea doesn’t recur.) During “Aprite un’po quegli occhi, “a silver (basket?-)ball descends on a wire, which our title character unhooks and tosses around and dribbles, albeit skillfully. Is it meant to be. . .a woman’s head? A planet of miniature cuckolds? A Harlem Globetrotters tryout? It was an entertaining distraction, but I am not sure it meant anything much to the story at hand.
Blocking was ill-considered in supporting the comic set-up and punch line. The Susanna-Marcellina Act I Bitch-Off was, well, just. . .bitched. Not a laugh to be gotten. Or even a loud smile. Stage pictures were often “all right,” but focus remained a problem throughout the night. When Susanna has her moment in the great Act III sextet of revealed parentage, she is sputtering her “sua madre’s/padre’s” completely blocked as she runs behind the other principals. Too, our director over-used a convention of dragging many solos to the furthest downstage point of the platform, changing the lighting to an isolated dramatic focus one-on-one with the audience, which almost rendered them concert arias. Ah well, happily — very happily — we had at our disposal a first rate cast.
Kyle Ketelsen is a world class Figaro, not only possessed of a healthy, burnished mellifluous bass instrument, even throughout his extensive range, but also gifted as one of the most inventive actors to be seen on an opera stage. His is a richly detailed, solidly acted, individualized impersonation. Ofelia Sala was almost his match as Susanna. Although her dramatic approach seemed more generalized, she displayed good stage savvy, game to try anything, and her well-schooled soprano had a hint more weight to it than many a Susanna. “Deh vieni” may have not had the pristine shimmer of a Kathy Battle, but it was compensated with substantially more thrust. Sidebar: why Mr. Ketelsen (as the title role) and Ms. Sala (who by far has the most stage time) are not getting the final bows is very odd. Those honors fell to. . .
Emma Bell, her securely sung Countess sleek and elegant of mien, really delivers the goods with sensitively controlled vocalism, meticulous phrasing, and, as needed, a generous fire in dramatic outbursts. Is it quibbling to want her to seem less self-absorbed by re-thinking some slightly-too-precious, cooing introspections? Judicious fine tuning might make the audience pity her more, if she pitied herself less. As the Count, Ludovic TÈzier confirmed his growing reputation as today’s leading French baritone. He made good on that promise with a virile, buzzy tone, and solid stylistic command, although he did seem to tire slightly by opera’s end. “Contessa, perdona” was not the melting denouement it should have been, but blame for that moment can be shared with the poorly judged staging and conducting.
I quite liked Sofie Koch’s well-voiced, hard-working Cherubino with the caveat that her slightly covered tone made the lad sound a bit more mature than other, brighter voiced interpreters. A former Susanna, Marie McLaughlin has now graduated to Marcellina, singing it well without quite comfortably fitting the role’s more comic demands. Friedemann Rˆhlig had considerably more success with a rollicking account of Bartolo, securely sung with panache. Ra˙l GimÈnez was luxury casting as the best-sung Basilio I have experienced. Doing all that was required (if no more) as Barbarina and Antonio were Eliana BayÛn and Valeriano Lanchas. The truly funny Don Curzio was exceptionally well performed by Roger PadullÈs. 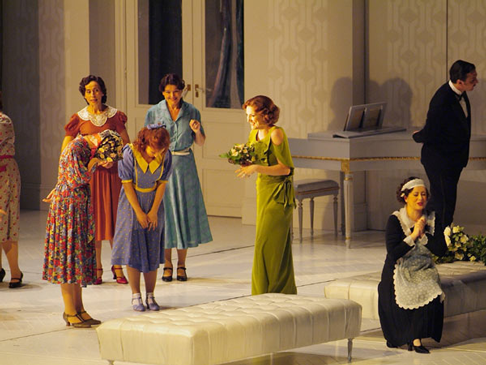 Emma Bell (center) as the Countess accepting flowers from the peasant girls and Susanna (Ofelia Sala, seated, as maid)
Last, and certainly least, the workaday conducting from Antoni Ros Marb‡ did little to serve this sparkling, crackling score. This usually fine orchestra sounded muted and uninspired from the git-go, with the cascading wind figures lacking incisive clarity. The horns had a bad first act but improved, while the keyboardist fat-fingered more than a few notes over the course of the recitatives. Worst, the rhythmic propulsion of the individual numbers was sometimes indefinite, resulting in a momentary disruption of coordination between stage and pit. Even at the leisurely pace of the duet “Aprite, presto, aprite,” our Susanna got ahead and there was a scary moment of Swedish until Cherubino got it back on track.
And so the evening went. . .sometimes too fast. . .sometimes too slow. . .sometimes slapstick. . .sometimes overly serious. . .always well sung. . .always nice to look at. “Figaro la, Figaro qua. . . “ All in all, it was a great pity that the stage director and conductor weren’t at the same high class party as the stellar cast and design team.
James Sohre