The psychological complexities linked to the depiction not
only of the title character but also of her numerous admirers and associates
could pose a daunting task to any company undertaking a new production of
Berg’s final operatic work. Lyric Opera has met these challenges with
respect both to Berg’s score and to his intentions for staging the
opera as dramatic event. Under the musical direction of Sir Andrew Davis the
complex score moves from passages of suspense and dramatic intensity to
segments of lyrical beauty, the transitions forming a seamless bridge to both
action and introspection. The new production commissioned by Lyric Opera is
staged by Paul Curran who had scored a noteworthy triumph here with his
production of Die Frau ohne Schatten in the previous season. In
Curran’s vision for Lulu, the stage highlights traditional
interior settings while using innovative lighting and projections in order to
suggest developments in the portrayal of individual characters.

The figure of Lulu, as hinted in the prologue by the animal trainer and
his menagerie, will represent female aspects of temptation, here taking on
the simulation of a snake. A transition from the representative or symbolic
tone of the prologue to a detailed realism of the first act demonstrates the
creative approach of this production in combining the abstract and the
concrete. Lulu, as sung by Marlis Petersen, is depicted in the
opening scene of Act I surrounded by male figures who will play increasingly
significant roles in her various transformations. Here Lulu sits for her
portrait while listening to the self-motivated discussions initiated by Dr.
Schˆn, a leading journalist, and by his son Alwa, who composes for musical
theater.

In this first scene the primary male roles are not only introduced but
also given skillful characterization by the singers in this production. As
Dr. Schˆn the bass-baritone Wolfgang Schˆne communicates the two-fold
personality of a callous businessman whose determined authority nevertheless
suffers from glints of weakness. Schˆne has performed this role in other
significant productions of Lulu, such familiarity surely elucidating the
depth of his interpretation and his ability to interact on varying levels
with individual characters. The role of Alwa is invested here by William
Burden with a revelatory performance: as one of the characters — along
with Lulu — who survives from the opening until nearly the end of the
work, Alwa must remain vocally incisive and dramatically convincing in a
variety of situations. Burden’s committed performance meets fully the
taxing vocal demands of the tenor role. At the same time, while depicting the
yearning musical writer who eventually succumbs to Lulu’s attractions,
Burden’s dramatic skills add further to a memorable characterization.
But it is the painter working on Lulu’s portrait who achieves amorous
success with the title character in this initial scene. In the first of
several roles that he covers in this production Scott Ramsay as the painter
presses Lulu in a physically ardent, if vocally understated, plea for her
affections. Shortly after she concedes to these advances, Lulu’s
husband enters. As soon as the Medizinalrat comes upon this scene of marital
disloyalty, he collapses dead of heart failure. Lulu’s reaction to the
shock and sudden death of her husband is a gauge of the complexity of
emotions that will continue to infuse Marlis Petersen’s portrayal
throughout the production. A mix of curiosity and consternation indicates a
character that is far from one-dimensional. The figure of Lulu —
inhabited and communicated so effectively by Ms. Petersen — revels in
adventure, suggesting at once a naÔve lack of guile yet also a measure of
complicity in the deeds and decisions to which she draws her suitors. 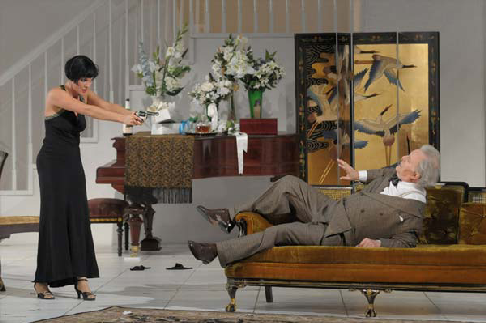 The musical and visual interlude between the first and following scenes
establishes a technique which Curran uses to great effect in subsequent
dramatic transitions throughout the production. During Berg’s
orchestral interlude projections of images onto a screen suggest, by their
change of shape or color, the progression of emotional, physical, or
intellectual change in both individual characters and the constellation of
the same. At the start of the second scene Lulu, who has inherited a
respectable sum as widow, is now married to the painter. Countless sketches
examples of her portrait adorn the walls. The figure of Schigolch — a
character never fully identified from Lulu’s past — is
introduced near the start of the scene when he knocks at the door of
Lulu’s home and is presented with money by the heroine. In much the
same way as the character Alwa, Schigolch will resurface periodically until
near the close of the opera. In both solo and ensemble work bass-baritone
Thomas Hammons as Schigolch proved to be an effective foil to Lulu’s
carefree attitude. In their interactions a mutual enhancement could readily
be perceived. Indeed Ms. Petersen’s impassioned singing of the
repetition on “blind” in this scene with Schigolch underlined her
dramatic involvement with exquisite controlled agility in the upper register
of her voice. By the close of the scene Dr. Schˆn has revealed to the painter
his ongoing liaison with Lulu, in this production a psychologically riveting
exchange, the realization of which drives the artist to take his own life in
a separate, enclosed room. The final scene of Act I reveals Lulu as a
theatrical dancer thanks to the patronage of her former suitor Dr. Schˆn.
Lullu’s effect on Schˆn and his impending marriage to another
illustrates how Berg intends the lead character not only as a display of
herself but also as a means to bare the true character of others. Ms.
Petersen is especially effective here in showing Lulu’s vulnerability
as well as her strength, both of which cause reactions among those
surrounding her. Dr. Schˆn—- while referring to Lulu’s
indestructibility — is now indeed persuaded to compose a written
renunciation of his engagement.

The second act highlights Lulu’s marriage to Dr. Schˆn, his death by
her hand, Lulu’s incarceration and time also spent in a medical ward,
and finally her liberation and physical union with Alwa, the son of her dead
husband. Throughout this act Lulu’s devoted female companion, the
Countess Geschwitz, demonstrates her willingness to compromise and even to
sacrifice her own well-being in order to save Lulu. As the Countess,
mezzo-soprano Jill Grove sings with an appropriate and convincing dramatic
urgency, lending her character’s personality aspects already
encountered in the roles of Dr. Schˆn and Alwa. The interlude between scenes
one and two takes place after Lulu has shot her husband and before the plans
to release her from prison are realized. Berg’s musical interlude
serves as the accompaniment to a black-and-white film of the arrest, trial,
and subsequent confinement of Lulu. This extension of the projected images
used between other scenes is a dramatic masterstroke, in which the actual
singers are filmed and displayed in the cinematic style of the period.

In Act III of the opera the two scenes take place in Paris and London
respectively. Lulu’s successful escape has led to reunion with the
Countess Geschwitz and Alwa, although the search for Lulu as criminal has not
abated. In their Parisian home Lulu and Alwa are surrounded by characters of
questionable reputation and less than stable profiles in matters of finance.
Lulu’s narrow escape from this atmosphere, as their investments
collapse, brings her to London and the true realm of the underworld. She
spends her time as a prostitute, living together with Schigolch, Alwa, and
the Countess Geschwitz — before dying at the hands of Jack the Ripper,
her final client. The last words belong here to the Countess Geschwitz, who
has fallen as the second victim to Jack, before he leaves the London flat.
With extraordinary pathos Ms. Grove intones, in her dying words, an
unwavering feeling of the Countess’s devotion and love for the
cherished Lulu.