So, directors Moshe Leiser and Patrice Caurier are faced with a choice: is
this ‘children’s opera’ a tale of sugary sentimentality or
a gothic nightmare? To my mind, they aren’t quite sure … The
opening act presents a realistic portrait of ‘modern-day family
life’, complete with financial woes, parental neglect, bolshy children
and over-sexed adults; the second act glides into a kitschy fantasy landscape
in which magic and mystery induce a sense of temporary calm, and banish the
demons and debt collectors; while, in the final act, menace and maliciousness
are unmercilessly unleashed, shocking us almost as much as the thunderous
explosion which brings to an end the witch’s depraved malevolence. 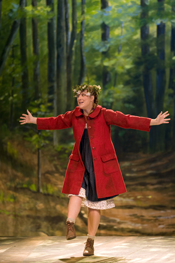 Christian Fenouillat’s set — a box cradled within a box, all sharp
angles and distorted perspectives — recalls his designs for
Leiser’s and Caurier’s Il Barbiere di Siviglia.
Hansel’s and Gretel’s bedroom is similarly sparse, even bland, in
decoration; and, unfortunately, there is little room within this confined
space for the physical movement and dancing which the libretto seems to
demand, in this act and subsequently. However, as in the earlier
collaboration, the enclosed space is effortlessly transformed by clever use
of sliding walls and subtle projections, effecting a graceful transition from
the real to the fantastic, from the Spar shopping bag to the miniature
gingerbread house. And, the final scenic transformation into the
witch’s kitchen is both slick and unnerving. Indeed, the fact that the
tiny room is translated into different environments may suggest that all the
landscapes through which the children wander are transformed versions of
their own home — a more subtle psychological reading than some of those
proposed elsewhere in this production. Moreover, although the angel-hamsters,
complete with fairy-light encrusted wings, who bless the sleeping children in
the central act may have been a little too twee for some, Fenouillat’s
designs for the woodland are beautifully conceived, a magical scrolling
panorama leading the children, and us, through the enchanted trees.

One could be forgiven for forgetting that Alice Coote (Hansel) and Camilla
Tilling (Gretel) are full-grown adults and not in fact young siblings –
boisterous, bickering, bearing the bravado of childhood — so faultless
were their vocal and dramatic performances. The characterisation was strong
and immediate, the mannerisms of childhood perfectly conveyed. We are
familiar with Coote’s unruly, over-excitable Hansel from her recent Met
performances, but she was matched by Tilling who captured Gretel’s
mixture of innocence and mischief. Tilling was more understated at the
opening, but warmed into the role, responding richly to Coote’s sweet
low registers; the timbral blending in the later duets was exquisite as the
vocalists expertly conveyed the sense of fun, the petulance, the fear, the
ingenuity of children. Both relished the words, enunciating clearly.

Ann Murray’s Witch was a fearful figure — both literally, with
her pendulous, exposed breasts, and symbolically, as, casting her redundant
Zimmer frame ruthlessly aside, she charged about a kitchen clearly designed
for mechanised killing. Here the sets created a real sense of
‘theatre’, the industrial-sized gas ovens, meat hooks and hanging
corpses chillingly echoing the mass murders of the concentration camps. As
she tumbled headfirst into Aga’s blue flames, the ensuing explosion was
a genuinely disquieting coup de thÈ‚tre. Murray’s delivery of
the role was superb: the intonation was secure and the tone full, never
remotely shrill.

If there could be no doubting Murray’s evil intent, Eri
Nakamura’s Sandman was a more curious conception: half-human,
half-puppet, this unsettling miniature ‘gremlin’ sported a
disturbing rubber mask and stuttered along with grotesque, stilted shuffles.
Nakamura, while sweet-toned, occasionally struggled to achieve ensemble with
the orchestra; however, in her defence, the peculiar characterisation meant
that she had to project from the very back of the stage, an absurdity when
the children into whose eyes she was supposedly dripping sand, were lying at
the front.

Indeed, dramatically the second act failed entirely to convince, lacking
the genuine magic it demands. The long sleep sequence, when the children
dream of a loving home, was unimaginatively staged: two cosy armchairs
snuggled close to a glowing fireside, as Hansel and Gretel delightedly
unwrapped the delicate layers of their Christmas presents — to discover
a homely sandwich … a symbol of their essential need for love and
family perhaps, but less than enchanting. The Dew Fairy, sung by Simona
Mihai, was cast as a pink-enswathed Barbie Doll, complete with rubber gloves
and spray polish — although in this rather sanitised environment, there
was clearly no chance of her ‘marigolds’ getting dirty!

However, pushing aside these small quibbles, it was a glorious musical
evening. There were certainly no weak links among the vocalists. The
children’s parents, Eike Wilm Schulte as Father, and Irmgard Vilsmaier
as Mother, were vocally precise and projected well — indeed,
Vilsmaier’s round, ringing tone reminded one of Humperdinck’s
debt to Wagner, and there was a danger that at times she would smother, both
musically and physically, the less statuesque Schulte! The gingerbread
children, performed by the Tiffin Boys’ Choir and Tiffin
Children’s Chorus, seemed not the least perturbed by their spell in the
Witch’s freezer: their singing was pure, true, and secure in intonation
and ensemble.

Shaping and supporting all, was the Royal Opera House orchestra under the
baton of 25-year-old Robin Ticciati. Ticciati swept through the score with a
sure sense of dramatic pace and musical colour, sensitive to the voices and
yet aware of the importance of the orchestra in this Wagner-influenced score.
From the warm, horn lullabies that open the work, he coaxed a myriad of
colours from the orchestra, seeking and finding just the right timbre and
mood to match the dramatic transitions between scenes and imaginative worlds.
The overtures and entr’actes were, thankfully, not staged, allowing the
audience to relax and revel in the landscapes Ticciati created.

Overall this was a delightful evening: Ticciati balanced momentum and
lyricism; all soloists performed with conviction, style and vocal sureness;
the designs charmed; and, in the end, good defeated evil.