Little
does this lady know who and what lurks just around the corner: Salvation by a
Fundamentalist Christian. But we’ll come back to that.

It is usual to look down one’s nose and say ThaÔs is only done, like
Puccini’s La fanciulla del West and many another famous opera,
when you have a major star to sing it. It’s ‘merely’ a star
vehicle and cannot stand on its own merits. Of course you don’t do
Wagner operas, do you, unless there is a top flight vocal star to sing
— Brunnhilde, Isolde, Elisabeth and so on? But ‘vehicle’ is
the key word. Wagner is never a ‘vehicle’ composer, for his music
is too innovative, too granitic, too magnificent, too important for that
— and with Wagner, always, the star is: Wagner. But with lesser
composers, which includes just about everyone else, the call to write a
showpiece for a famous star is hard to resist. Massenet met the demand when
he wrote ThaÔs for Sybil Sanderson, the neurotic American soprano,
who was generally regarded at the time as his mistress, and a major
theatrical attraction. 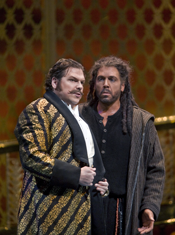 Michael Schade as Nicias and Thomas Hampson as AthanaÎl

Lately, the big opera house in New York has been doing all it can to favor
RenÈe Fleming, for she is the Met’s unquestionably brightest star. And
that seems to bother a lot of people, most especially it raises the hackles
of a crowd affectionately known as “opera queens,” a group of
indeterminate age and sexual-orientation, who mainly live in or about New
York (though they exist everywhere), that take pleasure in critiquing the
negatives in just about anything they run across. Lately Mme. Fleming’s
courtesan has been well-relished fodder for their threshings, and
Massenet’s oeuvre has been caught up in their dust and declared out of
date, second rate piffle (I wonder, is there first-rate piffle?).

OK, I’ll take the bait! I am here to tell you that Miss Fleming IS a
star, because she has earned that status by an unusual lot of talent,
discipline and hard work, and Massenet’s opera is quite a bit more than
mere ‘vehicle.’ It is thoughtful, well-composed and touching
music theatre, when adequately performed. And, is the very coin of the
Belle Epoch, Second Empire France — a yeasty and
remarkably fruitful period in the arts, and especially operatic arts —
France ruled nearly supreme in the opera houses of the western world for
several decades back then. For some of us, French opera is still a
highly-valued aesthetic wonder. Massenet’s music is a delicious
confection, of melody, pointed harmony and organization; of its kind and in
its day, it was/is hard to beat. 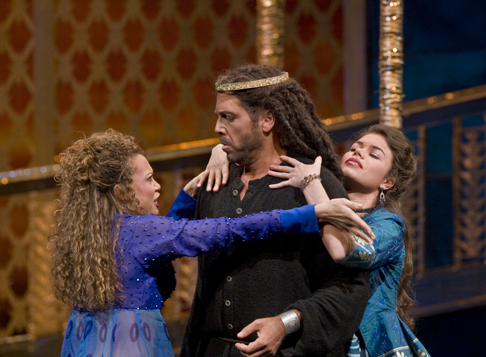 Here is my argument: Massenet’s operas, Saint-Saens’ works,
and those of Gounod, Bizet, Ambroise Thomas, G. Charpentier, and many others
of that French school, must be taken in context, treated as valued period
pieces and given full respect. If you have star singers so much the better
because they draw audiences (“anything Fleming does, I want to
see”), and throw the glow of stardom over their roles. In the late
decades of 19th Century France, mixing religion and sex was found to be the
drug of choice for audiences craving potent entertainment, and box offices
looking for patrons. In opera, erotic sensuality clothed in pious religiosity
was highly acceptable to the values of both Church and State, and catered to
public moral approval in works such as Samson et Dalila (oh, that
Bacchanal!), Faust (poor weak Marguerite, but she was saved by
Angels in the end), Le jongleur de Notre-Dame (the blessing of Jean the juggler by the Virgin Mary), even unto Italy in 1918 with
Puccini’s Suor Angelica, and many operas, oratorios
and stage pieces too numerous to mention. There is just one hitch: You cannot
update these pieces, give them modern-day regietheatre treatment or extreme
concept productions, or you kill the innate aesthetic-emotional core of the
work. You don’t make fun of something meant to be taken seriously, and
still enjoy it. The Chicago Lyric-NY Met production by John Cox, et. al. was
traditional, if with a couple of acknowledgments to Massenet’s time. It
worked.

There were many moist eyes in Santa Fe’s Lensic Performing Arts
Center when the Meditation was wonderfully played by Met Opera violinist
David Chan, and again when that immortal melodic sweetmeat returned at the
end for ThaÔs’s final duet with Thomas Hampson’s religious nut
AthanaÎl (clearly a Freudian case), who led her from being working girl to
holy sister and an early death, strong emotion was perfectly appropriate.
“Strange how potent cheap music is,” famously and sardonically
commented Noel Coward — I would omit ‘cheap,’ amend it to
read ‘…well-composed easily accessible music which touches most
listeners.’ The critics and cynics of New York rain on such on-the-cuff
operatic emotion, and I can only say it is their sad loss. Massenet
understood the human voice and wrote for it brilliantly — Fleming said
in an intermission comment, “ThaÔs’s music lives in the middle
voice and that’s perfect for me;” many another well-grounded
vocalist would agree. 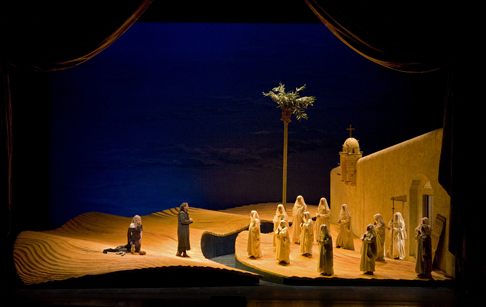 But what about Fleming — how ‘star’ was her performance?
It proved a perfect assumption. I cannot imagine any prominent soprano today
who could better her achievement, or even match it and sing the role with
such mastery and ease. At this ripe point in Fleming’s career (she will
be age-50 next Valentine’s Day), her instrument is as lissome and
tonally beautiful as it will ever be, while her high-register remains
thrillingly adequate to any task she sets about. Opening night (Dec. 8),
critics noted discomfort with two high D-naturals in the death scene duet;
then it was learned the singer had just recovered from a bad cold (though no
announcement was made). Later performances found her in perfect health, and
December 20 her voice floated magically, and reached the highest tones with
beautiful Èlan. Let it be noted that previous star-turn ThaÔs productions
featuring top prima donnas of their day, and I refer to Mary Garden and
Geraldine Farrar in the 1900s & 1910s, whose singing was not close to the
quality offered by Fleming. Garden and Farrar were ‘personality’
singers, public darlings, early movie stars and prominent social figures.
Neither of those admirable artists had voices to compare with Fleming’s
rich lyric-soprano and neither had her ease in the top range. I heard
Leontyne Price sing ThaÔs in 1959, in a rather embarrassingly silly Lyric
Opera of Chicago production (I recall Nicias wearing a lime-green chiffon
skirt to his mid-thigh — poor Leopold Simoneau!), with Price
over-singing the music in a heavy dense soprano, and not having a clue as to
how to act it. These ‘star vehicles’ are not for just any vocal
Cadillac are they?

Since I deem ThaÔs a beautiful, well-polished, if dated, piece of
exoticism well worth enjoying, I will also say that Fleming’s acting
reminds one of pre-Stanislavskian times. Hers is not internalized acting of
the Method School. She approaches her role as OUD — object of universal
desire, a sort of generalized eroticism with Mae West-esque narcissistic
preening or, as may be required, modest downcast-eyed shame & regret when
her world’s-oldest profession is brought up, as it boringly often is by
her doubting Thomas AthanaÎl, or joy and happiness as the Gates of Heaven
open to her. The smile is always there, always the same smile, and very
beautiful. The sculpted visage has no better side for all sides are perfect;
she is at ease and relaxed in every stance, and seems to be having a good
time, even when playing a bad time. Well hell — did Bette Davis ever
play anything other than Bette Davis? But could Bette sing a sustained
high-C? You get my point. Fleming’s invocation of Venus over the fuming
senseur in Act II was so ravishingly sung and given an HD, Gloria Swanson
close-up — it easily passed inspection. If you are bothered by full
Monty operatic camp, maybe this parable of Egyptian Christianity is not for
you, but if high style, haute exotisme, played and sung with energy and
aplomb move you, as it did this observer, then the Met’s 2008
production should be just your cup of almond tea. Go for it! In terms of the
style and time in which Massenet’s opera was written, one could argue
we saw ideally realized star vehicle. And it was musical perfection.