Appearing as the young Novice in Benjamin Britten’s shipboard
tragedy, Billy Budd, in Santa Fe Opera’s 2008 season, Jameson
proved what he can do most impressively. His young novice sailor first
appears shirtless and scarred with lash marks, the victim of a sadistic
master-at-arms (John Claggart), and the cruelty of life at sea; later, he
must confront Claggart and plead for mercy at the hands of a sadist in a
highly emotional scene. Sounds like a daunting assignment for a 40-year old
singer who grew up in a small town in South Carolina. How does he do it, and
how does he manage to look and sound a crazed lad of 25?

“I am at least as much actor as singer,” Jameson explained
when I asked him. “The two arts cannot be separated.” He seems
disarmingly mild off stage, modest of build with blue eyes and dark hair, an
infectious grin and gentle mien, which can explode into unexpected fireworks
onstage in the heat of performance.

“Ben Britten is my favorite kind of music and I hope to do a lot
more of it,” Jameson said. Thus far he has sung Peter Quint in Turn
of the Screw, and in Britten’s Curlew River, as well as
some of the British master’s choral and sacred music, and has his eye
on the ingÈnue role of Albert Herring, in that captivating comedy of
village ‘types’ and coming-of-independence. “I almost want
to live in England, and specialize in Britten and in Baroque music,”
Jameson admits. He would doubtless be welcome, with musicianship grounded in
far more education than most professional singers enjoy.

After music and vocal studies at college in South Carolina, Jameson joined
the Eastman School at Rochester, N. Y., and earned a Master’s Degree in
conducting and Doctorate of Musical Performance in voice. “I tried
choral conducting and a bit of teaching, but my real love is singing. I most
love to perform on stage and make acting and musical expression become one
unified experience – for both performers and audience. I just live for
it,” he beams. Jameson continues to refine his art and with good
results. “For about a year now I’ve been working with a new
teacher in New York, opening the voice, and that volume you heard in the high
range in Billy Budd is a result. Vocal growth has opened a wider
horizon for me.” 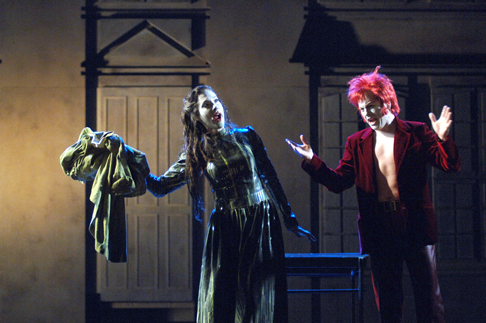 Keith Jameson as Peter Quint, with Lisa Houben as Miss Jessel, in The Turn of the Screw, Opera Royal de Wallonie in Liege, Belgium, April 2007 [Photo courtesy of ORW]

“ When the Novice is dragged before Claggart he is a terrified,
humiliated boy, and he begs for mercy, virtually for his life. He’ll do
anything to avoid further physical cruelty,” Jameson explains. In the
face of the boy’s screaming agony, Peter Rose, the powerful English
bass impersonating Claggart, maintained an almost eerie cool, his low-keyed
response creating a tremendous tension in the scene. “It’s hard
work to set up such extreme contrasts and takes stamina and real acting; that
is why I loved doing it. And playing against Peter Rose is something
special,” Jameson found. Few in his Santa Fe audience knew Jameson
could sing with such passionate power, so his recent performance proved an
exciting revelation.

Jameson sees plenty of years ahead as operatic tenor, but when I asked if
he eventually planned to become a teacher, his reply was immediate: “No
indeed, I want to run an opera company” (This guy is full of
surprises!) “I’m serious,” he continued. “I have
started a small chamber music festival, January each year a time that needs a
seasonal pick-up – and I present at my Southern home town a musical
stage performance, some sacred music and a program of pure chamber music, and
I want to make that grow into a music festival in due time that specializes
in presenting American opera.” He cites the example of another
character tenor and former Santa Fe performer, Darren Keith Woods, who
switched from performance to management and is now the successful general
director of the Ft. Worth opera, which he converted from conventional company
into an annual opera festival. “Darren has shown us how, so here is
hoping,” Jameson said. “But I have many roles to play and many
songs to sing before that happens.”

Dr. Jameson has earned an exciting professional future, whatever form it
takes. 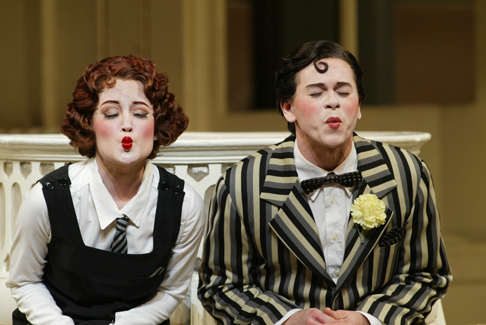