Nobody could have anticipated
that the 60-year-old conductor would suffer a fatal heart attack only four
days before ENO’s opening night.

The show went on in Hickox’s memory, led by ENO’s Music Director Edward
Gardner, who had the difficult task of taking on the project in such sad
circumstances. And Vaughan Williams’s opera, based on a play by J.M. Synge,
is a grim work by anybody’s standards. A peasant woman, Maurya, lives in a
coastal hut in the Aran Islands and has had two daughters and six sons; four
of the sons, along with their father and grandfather, have already had their
lives claimed by the sea. The fifth is missing, believed drowned, and fate
dictates it is only a matter of time before the sixth is similarly lost. In
the space of forty-five minutes, both are confirmed dead.

This was an impressive opera-directorial dÈbut by the actress and
theatrical director Fiona Shaw, who created an emotionally-intense dynamic
within what’s left of Maurya’s family. Their house is delineated by lighting
only; there are no walls, so there is never any escape from the elements.
Huge, shadowy upturned boat-hulls descend from above the stage, surreal and
coffin-like. Tom Pye’s wonderfully bleak, craggy set is suggestive of a place
which exists outside of the progress of time; a primaeval wasteland where
nothing ever changes and all human life is in thrall to the will of
nature.

In her final monologue, Maurya finds her anticipated devastation
supplanted by a sense of relief and comfort that her life is no longer
burdened by the certain knowledge of the destiny which awaits all of her
menfolk; in one sense it is a small personal victory over nature, albeit in
the context of an acknowledgement of human powerlessness. Mezzo Patricia
Bardon was extraordinary in this scene, imbuing the music’s lyrical lines
with an radiance that contrasts vividly with the terseness of her earlier
anguished dialogue.

Sopranos Kate Valentine and Claire Booth, both making their ENO dÈbuts,
portrayed Maurya’s two daughters with emotional intelligence and excellent
diction. Leigh Melrose — too long absent from the stage of the Coliseum
— was ideal as the angry, burdened Bartley, the last surviving son.

The opera is well under an hour in length, and rather than staging it as a
double bill with another short work, it was done with a curtain-raiser
— Luonnotar, Sibelius’s 15-minute monologue for solo soprano, in a
simple staging against the backdrop of Dorothy Cross’s unnervingly beautiful
video projections. Singing in the original Finnish, and suspended in the
centre of the stage in an eerie monolith which transpired to be one of the
fateful boat-hulls, Susan Gritton was wonderful as the eponymous air-spirit
who becomes trapped in the sea and inadvertently gives birth to the moon and
stars. It was an inspired choice of opener, introducing the relationship
between the sea and the eternal themes of birth, life, death and maternal
grief which Riders goes on to explore further. 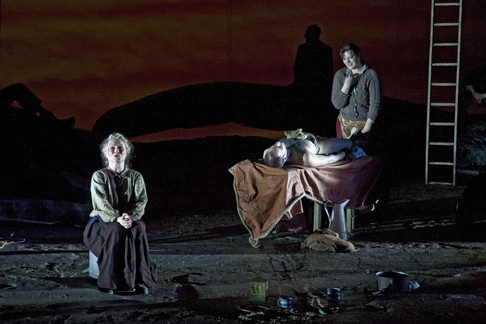 (left to right) Patricia Bardon as Maurya, Leigh Melrose as Bartley and Kate Valentine as Cathleen

The production integrates the two works fully, joining them into a single
piece with a specially-commissioned interlude by John Woolrich, an
organic-sounding progression of abstract chords. Not only does the pregnant
Luonnotar open the performance — she closes it too, re-emerging onto
the stage outside Maurya’s empty home, seemingly ready to give birth once
more and perpetuate the cycle of motherhood. 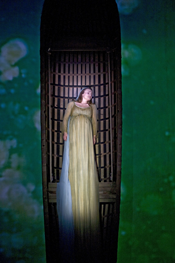 The orchestral playing was powerful, lyrical and atmospheric in what is
mostly very subtle and understated music; the standard was a fitting tribute
to the late Hickox. It was a superb performance by a fine cast in an
excellent production — but it was never going to be a cheerful
experience.