Last spring, you may recall, saw no fewer than four tenors in the
role (in seven performances), only one of them scheduled (Ben Heppner, in
splendid voice when he finally showed up, post-op), and one of them a role-
and House-debut, Gary Lehman, who earned the standing ovation he received for
that feat, sharing it with the lady, Janice Baird, who jumped in to join him
in mid-scene. It was not the greatest performance of the opera ever, but it
was thrilling show biz.

This year, appearing at the second performance, with more preparation, to
replace an ailing Peter Seiffert, who had most unwisely sung the
prima through a bad cold last Friday, Lehman and his co-star,
Katarina Dalayman, got an ovation again, this time for singing it well.

New York in as meteorologically uncertain a month as this last November
has been is no place to be certain of any singer’s health. (As Placido
Domingo said, in his first New York Times interview over thirty
years ago: “Phlegms! Why do they exist?”) And then,
Tristan: there aren’t many who can sing it (not well) in any age, but
we are going through rather a good patch, with Forbis, Heppner, Lehman,
Smith, Storey and Treleaven (and I’m still waiting to hear from Johan
Botha on this one, while Jonas Kaufmann is said to be studying it). I had
been looking forward to hearing Peter Seiffert, who sang the even more
awkward (if shorter) role of Tannh‰user so beautifully at the Met in 2004.
Perhaps it was just that cold, or perhaps he has waited too long (he is 54)
— in any case, the broadcast of his debut was not a happy occasion.

Lehman’s virtues appear to be just what they seemed at his surprise
appearance last year: He is a tall, slim, sturdy figure with a grainy voice,
lacking Heppner’s and Dean Smith’s lyric suavity but well enough
grounded from his years as a baritone to keep the tone pumping all night. He
paced himself through duet and endless death scene (which he sang standing
up, not lying down, looking not very sickly to me), and if yearning and
despair were not the emotions I felt in his performance (as one does in a
great, experienced Tristan), neither was there any marking of time: he is not
a subtle Tristan, an actor’s Tristan, but he is an assured one. This is
a good foundation on which to build an interpretation.

If anything, ours is an era rich in Tristans but lacking Isoldes. Neither
lady last year had the voice to make more than a stab at the music, and
Waltraud Meier, they say, steadfastly refuses to risk it in the enormous Met.
Will Christine Brewer undertake it here while she can still sing it? And will
her stolid stage persona satisfy modern audiences — admittedly, quite
possible in a production originally designed around Jane Eaglen?

This year we have the Isolde of Katarina Dalayman, who has already sung
Brangaene here — the roles are not very different in range, though
Isolde generally lies higher — indeed, it was difficult on radio to
distinguish her voice from Michelle De Young’s in their exchanges.
Dalayman approaches Isolde from a mezzo point of view: the high notes
feel low, edged up to, rather than soaring atop the orchestral
waves. It is a voluptuous, earthy sound, with the fullness so wanting in last
year’s arid Isoldes, and when she stepped to the stage apron and really
let fly (not often, but now and then), she was the loudest Isolde since
Nilsson. Nor did she tire, or lose her bloom in the long wait for her final
entrance — her voice slipped easily in and out of the texture of
Isolde’s Verkl‰rung, now drowning in lush orchestration, now soaring
above it, just as Wagner intended it to, and here her partnership with the
conductor was especially rewarding.

If Dalayman has a fault it is precisely the unvarying nature of her sound:
she does not play with words and phrases, emphasizing Isolde’s sarcasm,
her bitterness, her rage in Act I, to which the loving Isolde of Act II can
then be such a magical contrast. This is not an easy challenge to master
— Wagner’s heroine is a fully-rounded, complicated invention atop
the sheer physical demands — but its absence was apparent. In
recompense, we had floods of sumptuous sound at Wagnerian levels, and that
makes for a happy occasion. Withal, she is a handsome woman though the Met
larded her with far too much makeup. It added to my enjoyment of the opera
that the lovers occasionally looked at each other at loving moments and not
just at the conductor while they sang what is supposed to be a dramatic
performance. 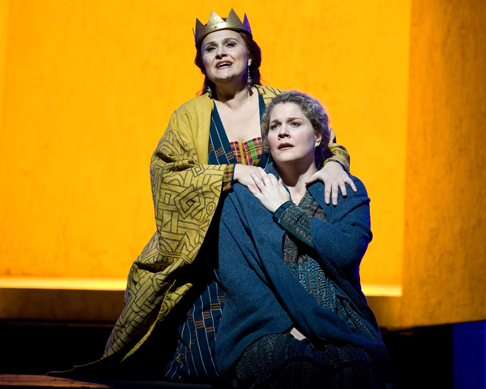 Smaller roles were capably filled. Michelle De Young is a familiar and
unflagging Brangaene, Gerd Grochowski a decent Kurwenal, Stephen Gaertner a
sensitive Melot (who acts the character’s understandable confusions).
RenÈ Pape, as usual, demonstrated, the moment he opened his mouth, what the
other men on stage were lacking in top-grade world-class vocalism — his
only problem was keeping that silly crown on his head during his bows. But
though it be heresy to say it, I do not find his glorious King Marke as
moving as were those of Kurt Moll or Matti Salminen, who sang even more
beautifully but, more important, with a sense of tragedy, of pain at the
heart at Tristan’s betrayal, that made this scene central to
one’s understanding of Wagner’s message, of just how much of
world and society the lovers’ passion obliged them to ignore.

The other hero of the evening was Daniel Barenboim, in his first
appearances at the Met — though he has been conducting this opera at
Bayreuth and elsewhere for twenty-five years. His is a lighter, swifter, more
impulsive Tristan than Levine’s, with much noticeable detail
from individual instruments that sometimes gets lost in the charge: the bass
clarinet under Marke’s monologue, the flutes at the beginning of Act
II, the last delicate touch of the harps at the evening’s end (when the
few who dared to clap were, happily, hushed at once: wait till the music
stops, damn it). The orchestra soared in joy for him, and the ovation was
general.

A small cavil: Barenboim, like Levine, occasionally drowns the singers
(Dalayman and Lehman wisely did not strain to fight him but let him win the
bout) — which suggests to me that, from his place in the pit, the
conductor of the Met orchestra simply cannot hear when he is doing this to
his singers — though there are conductors who are more careful about it
than Barenboim and Levine. My seats, I should add, were in center orchestra
— friends at the score desks five stories above me had no problems
hearing the voices loud and clear.

All photos by Marty Sohl/Metropolitan Opera.