The voice emerges easily, and is
of exceptional beauty from top to bottom, at any size you like, Wagnerian
power in the very grandest houses, light and quick in coloratura filigree or
lieder delicacy as called for. She is also a highly intelligent woman and an
effective actress. Stout in a svelte age, she moves with assurance and
dignity on stage, and she can cut up deliciously in comedies like
Italiana in Algeri and Offenbach’s Grande Duchesse.
She is always conscious of differences of style between Handel and Donizetti
or Broadway and the avant-garde, and she suits her sound to the music on her
plate, light or heavy, intellectual or humorous, baroque or grand operatic or
modern. Sincerity and majesty — or, in comedy, irony — are her
long suits: she creates a sublime Fricka or Handel’s morbid Cornelia or
Poulenc’s MËre Marie or Puccini’s Zia Principessa and wicked Zita
. One longs to hear her Amneris and Dalila and Isabella — roles she has
won kudos for in other cities, but has never sung in New York — not to
mention daydreams of what an Alceste or FidËs or Ortrud she would be.

All of this being so, and the glory of the many times she has thrilled me
in the past, I am puzzled by her beautiful but superficial, unmoving
performance as Gluck’s Orfeo at the Met. Every note was
beautiful but none of it touched the heart, hers or mine — as David
Daniels so unerringly did two years ago. Somehow Daniels found the trembling,
uncertain, bewildered soul at the heart of this desperate lover, humanizing
him, but Blythe makes Orpheus too formal, too rigid — an actor
portraying grief because grief is expected of a widowed hero. Coupled with
James Levine’s rather quick, unvarying tempi — a bit of a
surprise considering his tendency to slow down in Wagner — this was an
unemotional, unfeeling Orfeo.

In startling contrast, Danielle de Niese, whose pretty, tireless soprano
sometimes leaves me cold, projected all the desperation and confusion of
Euridice’s plight without distorting any of its usual beauty. (Heidi
Grant Murphy, as Amor, was a cipher with bad technique.)

I should mention that, like many no doubt, I had been worried about
Blythe’s appearance and movement in some version of the man-in-black
(-with-pointless-guitar) costume worn by Daniels, but here she has been
well-served (and has served herself well): she looked massive in a dignified
and masculine way, like one of our turn-of-the-century presidents, she moves
with the proper gravity. For an opera to be telecast, this sort of thing is
important — but not all-important. 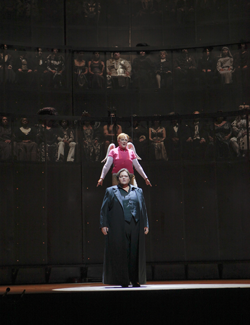 The myth of Orpheus is not a theatrical story — boy meets girl, boy
loses girl, boy has a chance to get her back but blows it. There is very
little for the girl to do, and hardly anything for anyone else: it is
practically a monodrama, though it has never (to my knowledge) been set to
music that way. To the ancients, it was a tale of death and mystical rebirth,
and if you joined the cult of the Orphic Mysteries, you could enter the
Members Only section after death — but that won’t do today: we
need a more universal message, like “Love conquers all,” even
though it clearly doesn’t. (Has anyone you loved come back from the
dead? Was that because you didn’t love them enough? Does anyone dead
come back? Mythologically, Eurydice never did.)

But as Orpheus was the mythic type of the musician, whenever
opera remembers its classical roots (not that they have much to do with what
opera turned into), Orpheus gets updated and some theatrical sense must be
made of his quest. In Offenbach’s operetta (a send-up of Gluck), the
two lovers have irreconcilable differences over his old-fashioned taste in
music. In Sarah Ruhl’s recent play, Eurydice, the girl tricks
Orpheus into looking back because she doesn’t want to rejoin him: she
prefers cozy death to chancy life. 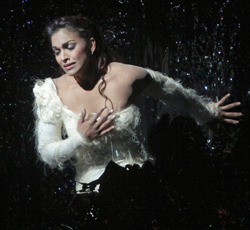 When Gluck and his librettist, Calzabigi, approached the subject, in a
self-consciously “reforming” mood, they started out by omitting
“boy meets girl, boy loses girl” — these events have
already occurred at curtain rise. They then expanded Orfeo’s quest to
the Underworld into several great solo, chorus and dance opportunities. Then
came their big alteration of the legend: instead of going so quietly that
Orfeo isn’t sure she’s there, begins to doubt the word of his
gods, and betrays his oath, this Euridice is a nag who never shuts up, and
Orfeo (who is barred, in this version, from telling her why he cannot turn to
look at her), is finally driven to violate his word. Euridice is lost and
Orfeo gets his most famous aria, “Che faro.” This is followed by
alteration two: The gods change their minds and give her back anyway. If you
have read the synopsis before you go in, this will undercut the tragic level
of what has gone before, but it does allow for extended dances of rejoicing
and a happy hymn to triumphant Love for us to hum going home.

I’ll admit I’ve never been entirely happy with any staging
I’ve seen of Gluck’s opera (six and counting) — though from
what I read, the current Viennese one sounds promising, austere and grand.
The opera is so tightly focused on Orfeo’s feelings that there should
be as little opportunity for wandering attention as possible, and I’ve
been most pleased when, for example, the chorus were out of sight, in the
orchestra pit, and dancers mimed their feelings. The Mark Morris staging at
the Met seems mostly to be about Isaac Mizrahi’s costumes (creating far
too much individuation precisely where it was not wanted), so that the
rhythmic gestures of the corps de ballet miming grief and sympathy (and, in
the finale, rejoicing), are distractingly individual, while the hundred
historic “witnesses” of the chorus who look on at this (and who
become without change of costume furies or whatever the libretto needs) seem
a pointless extravagance.

We always knew Blythe could sing the music; she can sing
anything. But the role does not play to her strengths, and I eagerly await
her appearance in something that does.