By Jens F. Laurson, Playbill Arts, 23 January 2009
The composer Hans Pfitzner, born 140 years ago, remains a controversial figure even 60 years after his death. Not his music – an uncontroversially beautiful, high-romantic blend of Schumann and Wagner occasionally reminiscent of Humperdinck, Schoeck, Schreker, and Schmidt – but the political persona.
Somewhere between stubborn, naÔve and ignorant, he uttered unambiguously racist phrases, was apologetic of Hitler and blamed everyone but Germany for World War II. He parroted anti-Semitic thoughts yet he went to great lengths to help and save “good Jews” (as he thought of them) like director Otto Ehrhardt, Felix Wolfes (a student of his) and his friend Paul Crossmann for whom he rang up Reinhard Heydrich to save (in vain). 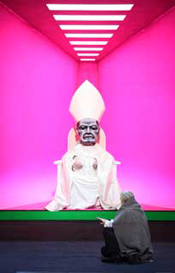 Peter Rose, as Pope Pius IV with Christopher Ventris as Palestrina
He tried to ingratiate himself with the Nazi regime but was inconsistent about it and offended more with his arrogance than he pleased with his favors. The composer ended up ignored, if not shunned, by the officialdom of the Third Reich. He dedicated works to Jewish artists like Bruno Walter, Arthur Eloesser and Alma Mahler, yet was capable of writing a cantata to Hans Frank, Governor-General of Occupied Poland.
Thomas Mann, who admired his opera *Palestrina* (which he attended at its Munich premiere in 1917), thought him an “anti-democratic nationalist,” Hitler spoke of him derisively as a “Jewish rabbi,” and friend Bruno Walter stopped communicating with him when Pfitzner showed himself unrepentant after the war.
We gather that he was difficult to like. Bruno Walter probably said it best when he wrote to his publisher, after Pfitzner’s death: “Have we not found in [Pfitzner’s] personality the strangest mix of true greatness and intolerance that has ever made the life of a musician of such a rank so problematic?”
But the music of Pfitzner is too good to ignore, and in this anniversary year, three German Opera companies staged Pfitzner. Chemnitz tackled the largely forgotten, largely forgettable Die Rose vom Liebesgarten in a very professional staging. The Frankfurt and Munich Operas work on a different scale, of course, and they tackle Pfitzner’s Magnum Opus, *Palestrina*.

The subject is the 16th century composer Giovanni Pierluigi Palestrina who prevents music being banned from church service at the council of Trent through his ingenious mass, the Missa Papae Marcelli, written under distress, angelic influence and breaking his writer’s block. A sub-plot has his student Silla decide that the old master’s traditional ways are not suited to his creative endeavors and plans to move to that secular sin-city of free roaming artists: Florence. 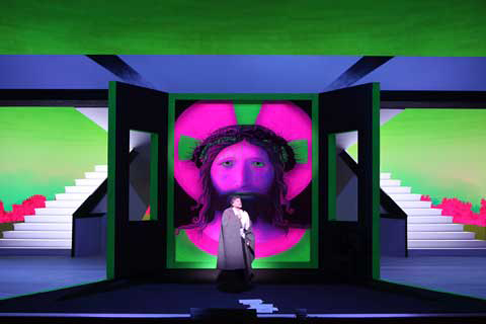 Christopher Ventris as Palestrina
This would be a fine opportunity to stage the conflict of art and politics and the tension of traditional and modern art in times of renewal. That potential was undoubtedly what fascinated Thomas Mann and Bruno Walter at the premiere. And indeed, it could be terrific sujet, but Pfitzner wastes more opportunities than he takes, and St¸ckl’s superficial production misses those that are left.
For a theatre director being in charge, there is surprisingly little coordination of the singers’ acting. The monochromatic stage and costumes – black, white, hot pink, and absinthe green – by Stefan Hageneier, are visually appealing at first, but they simplify unduly and become gimmicky by the time the three-and-a-half hours of music conclude.
St¸ckl, who by his own admission doesn’t much like *Palestrina* and loathes the libretto in particular, treats the religious subject matter and the Council of Trent – a-historical as Pfitzner may have put it together – as a farce. That tends to compound, not solve, the opera’s inherent weaknesses.
One of the problems of *Palestrina* is that there is too much text for the music and too little action for the text. The first act, 100 minutes, is overlong and its drama moves tediously. The next act sounds and reads like a secular second coming of *Die Meistersinger*. Instead of zooming in on the conflict of arts and politics, it is 70 minutes of clerical Barnum & Bailey in robes… at least in this particular staging. The third act, with strong shades of *Parsifal*, is most satisfying musically and a refreshing thirty minutes long.
Musically, matters are in solid hands with Simone Young, decisively navigating the Bavarian State Orchestra through two acts before losing focus in the third. But one can not help but wonder what might have come had the company managed to make this truly a Munich affair and lure Christian Thielemann – to whom Pfitzner’s idiom speaks so well – into the pit. Troubled operas need all the help they can get and Pfitzner’s music needs great performances to appear great. Merely competent outings smother its potential.
Some singers are outstanding in the otherwise evenly-good Munich cast, most notably the Bernardo Novagerio of John Daszak, whose controlled and comfortable tenor rings with clarity throughout. Christiane Kart brings a much-needed high voice to this opera without female characters, and her Ighino, the son of Palestrina, is bright and strong, with a young and tightly-luscious vibrato anywhere above her weaker low register.
There are many better operas more severely neglected and many worse operas performed more often. It’s good to have Palestrina back in Munich, but Pfitzner ultimately needs a more sympathetic and concentrated treatment to convince those who don’t already believe in the work’s flawed greatness.
**[This review originally appeared in [Playbill Arts](http://www.playbillarts.com/features/article/7891.html). It is reprinted with permission of the author and Playbill Arts.]**

All photos by Wilfried Hˆsl courtesy of Bavarian State Opera.