I doubt it, nor
should it. Oddly, Lewis’s name and history have surfaced lately due it
seems in some measure to the success of RenÈe Fleming in ThaÔs at
the Metropolitan Opera. Not that Ms. Lewis ever sang that virtuoso role, but
in the 1920s she made recordings of a solo soprano version of the so-called
Meditation from the Massenet opera that was so successful it was recorded
twice by Lewis, 1923 and 1927, and people are still making reference to
it.

This has come about because the wizardly restorer of old recordings, Ward
Marston of Philadelphia, has gone to the trouble to revive and issue, quite
successfully, all known Lewis recordings, both acoustic and electric,
including two dozen songs transcribed in studios for radio broadcast —
these from around 1937, more or less the last moment in Lewis’s
troubled career, yet a time when she was still touring in Europe, even
singing song recitals at the Salle Gaveau in Paris.

Rose Publishing in Little Rock, Arkansas, the state of Lewis’s birth
in 1897, has issued Mary Lewis, the Golden Haired Beauty With the Golden
Voice, by Alice Fitch Zeman, a so-so, home-town-girl biographical
run-through. The author seemingly is not much conversant with the worlds of
classical singing or opera, and her book seems written to a somewhat lower
level of musical awareness than its subject might suggest. Zeman offers a
cogent chronology of Lewis and her turbulent life and brief singing career,
however, with fair documentation and notes. So, with a book, a record and
chat on the web — what more is needed for a career to be revived?
Perhaps an article in OperaToday?

Let’s give it a try. Lewis’s life is, sadly, that of a clichÈd
B-grade movie, and I don’t mean that disrespectfully, for she made a
game try and it clearly was no easy path. She was born in poverty in
Arkansas, her parentage not clearly attested, and badly neglected as a child.
Matters improved when a Christian minister’s family took her in, and
later when older relatives took an interest in her. Mary managed to get some
high-school education, all that was expected for a girl of her station in
those times, but her life was haphazard and she ran away with a theatrical
troupe headed through Canada to California. By the early 1920s she was in New
York City, receiving some musical training and found herself a star of the
Ziegfeld Follies of 1921 and 1922. Lewis was unusually beautiful and
charming, in spite of all. She is constantly referred to as “golden
haired” in a time when that was a sure sign of favor, and the many
photographs in Zeman’s book often show her as a beauty. During two busy
seasons with Ziegfeld, Lewis was well paid and decided to try out for grand
opera, so undertook serious vocal training — with a modest measure of
success. I suspect that training managed to define her issues, without really
resolving them. Nevertheless, she auditioned forMet Opera director Giulio
Gatti-Casazza in 1923, and he sent her off to Europe for study and
experience, to pursue what she called “my operatic chimera.” She
auditioned at Paris and Vienna and soon was singing in those cities as well
as Bratislava and London. In 1924 she took part in and recorded Hugh the
Drover, in the premiere of Vaughan Williams’ opera. On the
continent she was singing big roles such as Gilda — in her
mid-twenties, on precious little vocal training and technique. 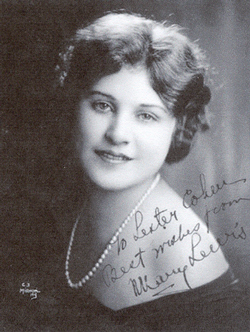 The 1920s was the decade when Gatti-Casazza and the Met were making an
effort to create American stars in the wake of the Great War and a short
supply of saleable names for the operatic stage to replace retiring Europeans
such as Caruso, Scotti and Destinn. At the same time, there was something of
a push for nationalization of operatic repertory on American subjects
(Merrymount of Deems Taylor is one of the more successful examples),
which would become American casts. Unfortunately, an important lot of fine
native vocalists, Nordica, Eames, Easton, Farrar, Mason and others had nearly
all gone.

The pioneering glamour girl and diva, Geraldine Farrar a true national
operatic, movie and concert superstar, by 1922 was hanging it up — so
it was time for a new generation of Americans. New York-born Rosa Ponselle,
far too young and under-seasoned for the big time, soon burst upon the
Metropolitan with historic success and joined major established figures
(Jeritza, Galli-Curci Gigli), and new Americans such as the young California
baritone, Lawrence Tibbett, in dominating the Met stage. In the same period,
in 1926, a young and unready soprano from Missouri, Marion Talley, zoomed
into the galaxy of Met stars, as did Grace Moore of Tennessee in 1928 (who
lasted longer as we shall see). Mary Lewis, the most beautiful and stage
worthy of them all, most observers agreed, also debuted in 1926, after a
whirlwind few years of training and singing in Europe, but was finished after
1930, leaving a record of only 25 performances, none distinguished. By 1929
Talley was gone, by 1933 Moore had left the Met to revisit show biz and
Hollywood. By contrast, in 1931 Lily Pons, the chic French coloratura assumed
stardom that lasted for three decades at the Met. What was going on here?

It was exactly what you expected: under-prepared young singers doing too
much too soon, a thrice-familiar story unto this day. After a few seasons,
Ponselle (who had by far the most beautiful and important voice of the lot),
began to encounter vocal limitations and loss of confidence. In little more
than a decade, she slowly cut back, her final Met appearances made in 1936.
Moore returned to opera in the mid-1930s, for sporadic performances until
1946. But her vocal history was spotty. “When everything went
right,” as she said, she could turn in a reasonable Mimi or Louise
— though her top voice was rarely in generous supply. Moore became a
glamorous movie figure and international socialite, limiting her operatic
performances to a few roles and only occasional concert appearances. She died
in an air crash in 1947.

Marian Talley simply burned out from over-exposure and inadequate
training, as did Lewis, who had to be taken off stage as Micaela in
Carmen as she was too inebriated to continue. Seemingly alcoholism
figured, off and on, in her troubled career. A couple of bad marriages did
not help Lewis, but in 1931 she married a Standard Oil shipping magnate and
ageing stage door johnny, Robert Hague, and took up posh living in the new
Ritz Tower on Manhattan’s East Side. Aside from some recital and
concert tours, and extended visits to Europe where she was popular,
Lewis’s career devolved into that of a radio singer, including a
successful nightclub appearance, while her status as a New York City society
hostess blossomed in her role as the fashionable Mrs. Robert Hague.

In a bizarre turn of events, as the 1930s rolled by Lewis began to suffer
increasing ill-health, never effectively diagnosed or treated. Later
speculation focused on her appearance in 1922 in the Ziegfeld Follies in a
radium decorated costume that literally glowed in the dark as theatre lights
were dimmed. While this was a neat theatrical trick, it probably cost Lewis
her life. Mary Lewis died of what is now seen as radiation sickness. She had
not sung opera for ten years.

Ward Marston’s two-CD set of Lewis’s recordings probably does
more than Zeman’s book to tell the real Mary Lewis story. Listening to
her sing operatic arias it is clear she was inadequate as both technician and
musician for major classical singing. Her beautiful youth carried her for a
time, but as the voice never caught hold and personal difficulties
multiplied, her vocal career declined. While it was sad, her departure was not a great loss to the world of musical arts, as her records now show. At
best, the Lewis voice was a mildly pleasant if thin lyric soprano, of
adequate range, but not often well handled, and her lower register remarkably
ill-developed. The famous, twice-recorded ThaÔs selection we hear so
much about is plain awful.

Lewis’s French diction is wanting, musicality is minimal, tonal
quality is inconsistent, there are mistakes in phrasing, errors in notes, and
climactic tones are driven, suggesting that by age-30 when the electrical
recording of the ThaÔs finale was made, Lewis’s voice was already
troubled. A decade later, 1937, radio studio transcriptions of various
American and European art songs show her more favorably and suggest the
musical stage might have been her real home. But even that is in doubt. As in
her childhood, maybe Mary Lewis did not really have a home. In Zeman’s
book, there are the usual scenes of triumphant returns to Arkansas,
residencies in Europe singing in Paris and other capitals where her American
beauty and glamour were appreciated, if not so much her artistry. But
attempts at movie stardom failed. Marriage to the older Mr. Hague ended in
separation in 1937; he died the next year. A few years later Lewis’s
illness carried her away, at a New York hospital, December 31, 1941. A Joan
Crawford movie, anyone? Bless Mary’s sad memory, at least she had some
happy episodes — as many as her nature and times seemed to allow. Lewis
was always star-crossed, and was representative of her generation of aspiring
but flawed young American opera sopranos.

And so it went for the careers of these and other second generation
American divas — second to the rigorously trained bel canto singers
Eames, Nordica, Homer and such. By 1940 a new group of American opera singers
with names like Swarthout, Traubel, Steber, Crooks, Peerce, Warren, Kirsten,
J. C. Thomas, Kullmann and many more was taking hold, and they proved in
every way better prepared to endure and grace their art. Like so much of the
1920s the illusion of success proved fast fleeting.

Editor’s Note: The book and CDs are available as a set through Arkansas State University.