New vocabulary was needed to describe the awesome
excellence of this first of nine performances of Wagner’s most sensual and seductive work.

This lay — briefly — in the brilliance of David Hockney’s sets and costumes, undiminished
even after 20 years on various stages. The cast was of an even artistry hardly expected in
today’s overworked Wagnerian world. Andrew Davies did not merely conduct the incredible
orchestra that he has built at the Lyric; he truly recreated this mammoth score, leading the
listener through the tormented course that Wagner had pursued in writing the work.

This was, indeed, an evening beyond expectations. Yet its beginning was less than
auspicious. Deborah Voigt — more Barbie Doll than medieval mail-order bride in brightest red —
was strangely dwarfed by Hockney’s bigger than life designs. And the fact must be faced that
she no longer has that lush richness of voice that disappeared with her hard-gained
leanness.

Argentinian director JosÈ MarÌa Condemi, the only consistently weak link in the production
crew, was clearly in over his head in what appears to have been his first Wagnerian
assignment. Act One was segmented — a series of scenes that failed to flow into an engaging
dramatic whole.

Although Voigt handled the narrative well, her curse did not curdle the blood as it should
have. Indeed, had one not known — and respected — the work that makes her the “Isolde of
choice” in the eyes of many, there would have been a discomforting feeling that she was
miscast. Thus the amazement at the transformation that flowed from the Lyric’s stage in Act
Two. Here things jelled; individual contributions melded into a dramatic impact that listeners
carried with them into the cold and windy Chicago night.

This was above all a youthful Tristan. The Weltschmerz-stricken lovers were
convincing as humans feeling these conflicting passions for the first time. American
Heldentenor Clifton Forbis, well established around the world as a major Wagnerian, was a
handsome and well-matched partner for Voigt. A man of marked intelligence, he even made sense
of Wagner’s metaphysical ramblings on the conjunction “and” and matters of individuation in
Act Two, integrating this text meaningfully into the context of the intimate exchange that
follows the exuberant greeting that opens the act.

In his comments on the opera Condemi suggested that “the plot of Tristan could be
summarized like this: two women walking around the stage (Act One), two people sitting on a
bench (Act Two), and a man keeps getting up and lying down again (Act Three).” Alas, Condemi
was largely content to leave it at that.

Happily, it was Forbis who moved the opera beyond such simplification, especially in his
review of his life in Act Three, where so much that has happened before Act One is explained.
It is here that the real Tristan is encountered, and Forbis made him comprehensible — and
extremely sympathetic. He did this without a hint of strain or exhaustion. He is a singer who
knows how to use his voice wisely. 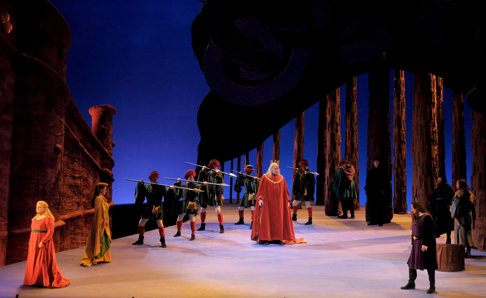 A scene from Act II of Tristan und Isolde

Particularly amazing was Jason Stearns’ sensitive portrayal of Kurvenal as a servant of
near-adolescent emotional devotion to his master. †A late substitute for Finland’s major new
Wagnerian Juha Uusitalo, Stearns came late to opera, having served 21 years in the Army before
turning to singing. Coached by Thomas Steward in the final year of the American’s life,
Stearns sang the Dutchman at Savonlinna last summer, and other Wagnerian assignments await
him. Whether he — a rather small man — can handle Wotan in large American houses waits to be
seen; here, however, he was a perfect Kurwenal who fit with ease into the concept of the
staging. Greer Grimsley replaces him later in the run.

Chicago makes it a practice to seek comment from its singers for its program book, and about
his role in Tristan Stearns wrote tellingly: “When Tristan dies, Kurwenal really
doesn’t want to live anymore. He forces death on himself — he wants to die with his leader.”
This approach came out in Stearns’s every move. He was a servant not of dog-like devotion, but
a young man tenderly in love — yes, the word fits here in its highest meaning — with his
master. It was a deeply touching portrayal.

If anyone “owns” the role of Brang‰ne today, it is Petra Lang, who has been Isolde’s soul
mate on every major stage and shared honors with Voigt when she †sang her first Isolde in
Vienna in 2003. Although Lang stressed that she sees Brang‰ne “as a younger confidante, a
friend to Isolde,” here she failed to cast aside the traditional German mold of a reserved
member of the court. And although she sang her second-act warning beautifully, Michelle
DeYoung would have been a more appropriate servant in this staging.

The flowing white hair that Stephen Milling wore made King Marke unusually aged — especially
in contrast to the youthfulness of the production. Yet the Danish bass wore his suffering with
credible dignity.

Wagner instructs that Isolde expire “as if tansfigured,” sinking in Brang‰ne’s arms onto
Tristan’s body, Condemi chose to have Voigt die on her feet at some remove from her beloved.
On the heels of a “Liebestod” so triumphantly sung as it was here such stage directions are of
little concern. Voigt gave it her all, leaving the audience so mesmerized that they were
hesitant to applaud until the stage grew dark.

In 1966 when David Hockney made his theatrical debut with Alfred Jarry’s Ubu Roi he
did not stray far from the proscenium like compositions in many of his paintings. He took a
bigger step in his designs for the 1978 Glyndbourne Magic Flute, where he opened the
first act with a rocky, palm filled landscape that is replaced by increasingly symmetrical,
monumental flats that refer to the opera’s earliest sets of 1791.

Nearly ten years later, in his design for Tristan he equipped the first-act ship
with sails that billow before an empty vista. In Act Two a heavy cloud, first drawn by Hockney
in Iowa, (1964), †looms over a diagonal stand of †trees across from Isolde’s palace
that again direct the action of the opera to its inevitable denouement. In the final act a
mammoth †tree arcs over the scene in which a desolate cliff carries the opera to its ultimate
tragedy.

Color was a fundamental key to the entire production: Isolde in the red of royalty, Brang‰ne
in earthly green, Marke, suitably in purple, and the men of action in functional “drab” or
colors related to the King. Hockney wisely borrowed the effect of his wardrobe from 15th
century paintings by Piero da Francesco and other early Renaissance artists.

The Chicago staging was sensitively lighted by Duane Shuller.

Holding this all together was the magisterial conducting of Lyric music director Andrew
Davis, whose delicate balance of singers and orchestras and shadings of tempo made this an
evening even superior to what the world admires in the Wagner of James Levine and the ensemble
at the Met. A truly and thoroughly remarkable Tristan und Isolde.

With Gustav Mahler’s valedictory Ninth Symphony the Chicago Civic Orchestra offered an ideal
prelude to the Lyric’s Tristan on January 26 in Symphony Hall.

The training ensemble of the Chicago Symphony, the 100-plus members of the CCO, graduates
all of the world’s top conservatories, were conducted on this occasion by Esa-Pekka Salonen,
retiring music director of the Los Angeles Philharmonic. Although just 50, on the podiatry
Salonen could still pass for a teenager. He was in perfect “sync” with his musicians.

In his Norton lectures Leonard Bernstein analyzed the concluding Adagio of the work — to be
played “very slow and reserved — as a triple act of leave-taking: it reflected first the
irregular heart-beat that was to fell Mahler before the premiere of the work, plus which —
said Bernstein — the movement is both the end of the symphony as it had existed up to that
time and further “the end of our Faustian culture.” The performance in a packed – provided
food for thought on “Lennie’s” ideas, along with the opportunity to contemplate the
consequences of Wagner.

All photos by Dan Rest/Lyric Opera of Chicago.